Valentino and MSGM were among the fashion labels that picked Milan's iconic theaters as the suggestive backdrops of their fall 2021 presentations.

MILAN — The worlds of fashion and culture are interlinked in a city like Milan, where designers and entrepreneurs have traditionally supported the art world across all of its disciplines.

There are numerous examples, but just to focus on more recent years, worthy of mentions are Miuccia Prada and Patrizio Bertelli’s creation of the Fondazione Prada in Milan, and Giorgio Armani’s establishment of the Armani/Silos exhibition space. In addition, at the end of April, Armani revealed his group’s decision to become supporting founder of the storied Milanese theater Teatro Alla Scala, a foundation that over the decades has benefited from the financial help of a range of fashion houses, including Luxottica and Dolce & Gabbana, which from 2015 to 2019 staged several Alta Moda and Alta Sartoria events at the historic location.

During the latest Milan Fashion Week held mainly in a digital format in February, the Milan worlds of fashion and art grew even closer with a range of brands deciding to film or livestream their runway shows and videos in theaters and museums, which were still closed due to the COVID-19 pandemic. The same happened in Paris, where Dior showed at the Château de Versailles and Louis Vuitton at the legendary Louvre museum, while Chanel and Celine staged shows in various French castles.

In Milan, Valentino brought life for a day to the rooms of the Teatro Piccolo, which was founded in Milan in 1947 and which is a symbol of the city’s high-end and world-acclaimed dramatic tradition.

“Choosing to show our collection at the Teatro Piccolo in Milano is a way to start the process of reopening places of culture in our country. We need culture to be alive and we need to talk about it,” said Valentino creative director Pierapaolo Piccioli, who decided to stage a show behind closed doors in the fascinating location. “Teatro Piccolo di Milano embodies the perfect symbol of all values our brand stands for, it is a place of inclusivity and freedom. This is a first step, and even if it won’t be open to the public, it will give I hope the idea that we are all going in the right direction.” 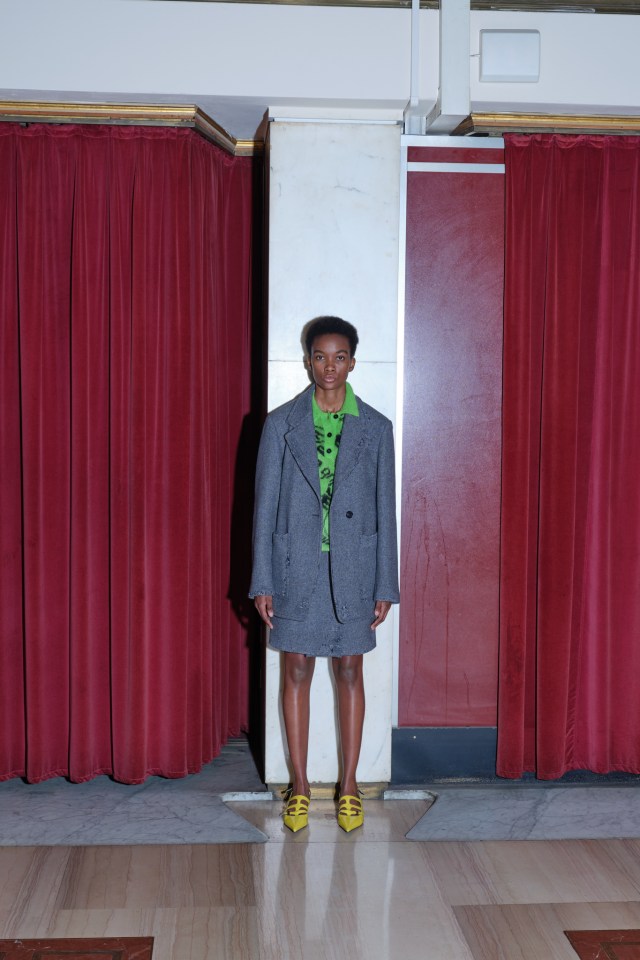 This is not the first time that the famed theater, located a stone’s throw from Milan’s Castello Sforzesco, has hosted a runway shows. The Laura Biagiotti brand for many seasons opted to stage its shows at the theater, which the company aids as an honorary supporter.

The support of private investors, which has traditionally has been key to keeping the city’s cultural and artistic offerings interesting and dynamic, will be even more important in coming years. As highlighted by research conducted in February by the L’Osservatorio dello Spettacolo Siae, an arm of the Italian copyright collecting agency, in 2020, due to the pandemic, Italian revenues from the sale of tickets for the theater, cinemas and concerts dropped 82.2 percent to 623 million euros from 2.8 billion euros in 2019.

“My opinion is that during the pandemic the world of culture has been totally neglected,” said MSGM creative director Massimo Giorgetti, who filmed the movie-like video for his brand’s women’s fall 2021 presentation at Milan’s historic Teatro Manzoni. The designer said the decision to pick the Teatro Manzoni came quite naturally. “We staged our first big institutional party there in 2013, celebrating our first artistic collaboration with Toilet Paper [the magazine],” he explained. “I think that’s an iconic symbol of our desire of getting together, returning to live our lives to the fullest and having fun.”

Giorgetti also believes that, especially in a city like Milan where fashion plays such a big role, the world of culture can hugely benefit from collaborating with brands and designers.

“Surely, there is no more efficient and powerful vehicle than fashion to reach especially the young generations and bring them closer to the world of culture,” said Cristina Tajani, Milan’s fashion and design city councilor, who praised the Milanese fashion system’s support not only to help cultural institutions but also to put in the spotlight less known areas and locations. “We believe in a poly-centric fashion system that can be instrumental in boosting and bringing new life into almost abandoned spaces or neglected neighborhoods.”

As examples, Tajani cited Ermenegildo Zegna’s and Moncler’s efforts in bringing back to life former and currently unused industrial spaces, spanning from the Area Ex Falck in Milan’s northern outskirts or the Magazzini Raccordati by the Central Station, with their shows and events.