Fashion Now was a response to hungry young designers desperately seeking a professional platform to present their innovative designs. 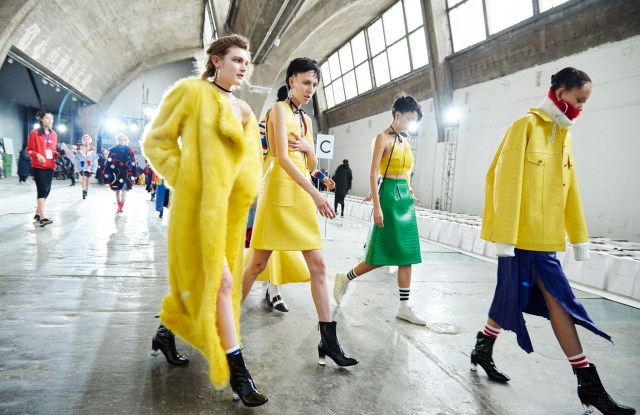 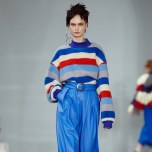 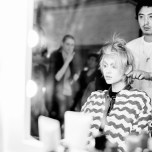 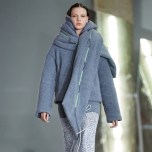 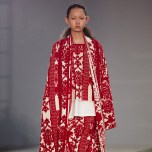 “After I left Vogue, some young designers said to me [that] they wanted to have a show — not at China Fashion Week but a more independent show to invite the buyers and media. So that’s the start,” said Jiang, who previously worked as Vogue China’s assistant fashion feature director. After helping a designer friend with a show several years ago, word spread about her work, leading to a dozen more designers knocking on her door for help. This led Jiang to enlist the help of Ma, then a production editor at Vogue China, who still works as a freelancer for the magazine, to help deal with the demand. After some brainstorming, they thought of Fashion Now, a small, curated fashion show produced by a team consisting of the city’s top editors, fashion directors, stylists and photographers from Vogue China, Harper’s Bazaar China, GQ China, Modern Weekly and others. They have rallied behind the project for the sake of making a positive contribution to the local fashion scene by sharing their expertise.

“For all the fashion insiders [editors and buyers], they want to come to Fashion Now because the production is different and it’s different than China Fashion Week,” Harper’s Bazaar China fashion editor Yoanna Liu said. She’s been part of the project since day one and worked backstage as the show’s whip, making sure everything was running on schedule. “We’ve been to all the fashion weeks in Paris and London and we see how they’ve done a big show and we’re more experienced than those who haven’t seen those big shows,” she added.

The show’s producers said they were getting paid a fraction of what they usually charge, adding it wasn’t about the money but the importance of putting on a high-quality show for designers they could put their name behind. Jiang said each show costs on average 100,000 yuan, or $15,426 at current exchange, and the designers share production expenses.

China Fashion Week wrapped up Thursday with a bizarre finale by Chinese-Dutch designer Sheguang Hu, whose models were draped in red costumes with multiple prosthetic hands and heads attached to them. Known for its random show offerings throughout the years, China Fashion Week has proven to be tough for China’s young designers. Several years ago, organizers introduced the Mercedes-Benz Designer Exchange Prize. But last year’s winner, London-based designer Xiao Li, and the prize’s other contestants — Christopher Bu, Vmajor and Helen Lee — did not participate in China Fashion Week last year.

Jiang said she’s selective of who gets to participate at Fashion Now since she wants to keep the event small to maintain quality. “I feel bad because I have to turn many people away,” she said, explaining how most of the designers she selects are emerging but have a few collections under their belt already.

As for Harper’s Bazaar’s Liu, she said being called an independent Chinese designer has cache and there are new designers popping up everyday. But only a few have the combined talent and business acumen to truly make it. Since there’s no buyer system in China, department stores act as landlords, charging rent instead of being curators, making it extremely difficult for young talent to surface unless they go into retail themselves.

Liu, an alumnus of Central Saint Martins, was a classmate of M essential designer Muki Ma, who worked at Yohji Yamamoto in London. The 30-year-old Ma completed his first runway show during Fashion Now’s fifth season and was immediately picked up by Opening Ceremony afterward. Ma, whose designs are often described as romantic and poetic, hails from Tianjin — a second-tier city considered to be the port of Beijing. He opened his first shop inside Tianjin’s Galaxy Mall earlier this year.

“I love his clothes, they remind me of a fabulous old lady,” said Pan Pan, a buyer for Fei Space, a multibrand shop in Beijing that focuses on Chinese designers, noting Ma’s beautiful use of lace. The shop also sells clothes from Shenzhen-based Vmajor, a finalist of the Woolmark prize last year whose detailed use of wool was demonstrated in their Mars-themed collection on the weekend, compact with baggy overcoats, long gray wool vests and minimalist dresses.

Vega Zaishi Wang, another Central Saint Martins graduate, brought her signature English charm in her latest collection inspired by the dapper Congolese Sapeur, a group of men known for their love of gentlemanly dandy duds who often don’t have the funds to afford it. As a women’s wear designer, Wang’s collection used strong colors and sharp, male tailoring to complement the equestrian-styled clothes. After learning about the Sapeurs on an episode of “Vice,” Wang thought about what else her clothes could offer apart from function.

“It’s about dignity,” Wang said, explaining how she hopes to bring her show to London one day. A regular at Fashion Now, the former intern for Alexander McQueen and Vivienne Westwood said what she loves most about Fashion Now is working with people who are passionate about what they do.

One of the show’s highlights was Ricostru by Guangzhou-based designer Rico Manchit Au. Her architectural designs are an editor favorite. In attendance was Vogue China editor in chief Angelica Cheung, who said she’s followed Au’s career from the beginning.

“Nobody knew about her back then. I saw her catalogue a few years ago. I asked my editors who she was and they said they’d check it out. They made a few calls and I said I wanted to speak to her. I think [Au] was quite shocked,” Cheung said of their first phone conversation.

The editor said she’s a supporter of Fashion Now as it’s a reflection of Vogue’s values.

“It reflects [Jiang and Ma’s] education in Vogue — everything’s good quality, precise and pragmatic,” she said, adding how she’s been considering the prospect of throwing a Vogue Day during China Fashion Week. “Maybe the time is now to stop complaining about [China Fashion Week] and to help and do something,” Cheung said, recognizing the show’s bureaucratic pitfalls.

Fashion Now newbie Anna Yang of Annakiki showed her futuristic, punky street-style collection on Saturday inspired by the craftsmanship of the Peruvian Incas. Yang said she chose to show at Fashion Now because it’s “independent” and has the feeling of a fashion family.

The event’s finale by Wanning Yu’s Evening received high praise. Her latest collection, inspired by an electronic candle, was minimalistic but fused knitwear, leather, mesh and silk that were cut on the ends to mimic burnt edges. “The electronic candle shows the fusion between the old and new,” Yu said after the show.