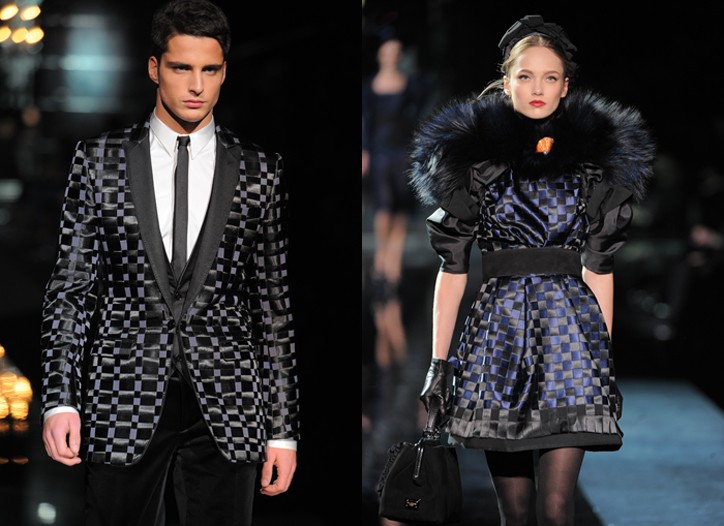 What works for men can work for women, too.

That seems to be the mantra among European designers, who increasingly are previewing what’s ahead in their women’s collections in the men’s wear styles they show a few months earlier.

While conventional wisdom is that men’s wear lags trends in women’s, the fact the two are increasingly in parallel should perhaps be not that surprising: After all, they emerge from the same creative minds and exhibit the same brand ethos.

For example, Prada’s show for women last month featured hefty wools and no-nonsense tailoring, staged with scaffolding and charcoal-gray carpet — repeats of what the house showed to the men’s market in January.

“Since we pretty much design the collections simultaneously, what is inspiring us at the moment could appear throughout our work regardless if it is women’s or men’s,” though not always, said Domenico Dolce. “The Dolce & Gabbana woman and man don’t live in separate worlds.”

“On the contrary, they share similar interests, taste and way of living,” added Stefano Gabbana.

And later, when the collections are juxtaposed in brands’ flagships, they need to complement each other.

“I develop the men’s collection before the women’s, but I always try to create a feeling that links the two,” said Gucci designer Frida Giannini. “To me, they are a couple, and it’s important to maintain a connection between them. It is a good couple to see together.” She works with distinct inspirations for each, “as they do have different personalities, but I like to build a connection between the Gucci man and woman,” she said.

Jil Sander creative director Raf Simons doesn’t deliberately forge a relationship between his man and woman, but it nonetheless arises sometimes, as in the latest collections, both remarkable for their sculpted curvature.

“I see no systematic need [for their togetherness in] my work,” he said. “But sometimes we work on an approach that is for both collections strong and challenging, as for the last fall-winter. There the development of shapes was essential for the women’s and men’s.”

“Given the timing of the design of each — that the design of one follows so quickly the inception of the other — there tends to be a domino effect from one collection to the other, especially when it comes to mood and sensibility,” he said. “Often when one looks back, one may see the threads of a men’s collection inform those of the women’s and vice versa.…It can be a positive influence when it occurs naturally, subliminally.”

Not that men’s design is a powerful force in women’s fashion. The rules of male dressing remain far too restrictive. But as men’s wear grows more sensitive to seasonal fashion direction, it overlaps aesthetically with women’s.

During the men’s shows in January, for example, “we saw post-apocalyptic urban warriors and a kind of mid-Eighties post-punk, and this came through in women’s wear….It’s been a evolution of fashion and men themselves evolving and being open to being more experimental with silhouette and new fabrications,” Rutson said, citing unisex themes at Alexander McQueen, Givenchy and YSL, among others.

“Burberry Prorsum is a perfect example of men’s and women’s being totally in line,” she added. Burberry’s nostalgic fall shows featured interchangeable neck warmers and bags, and closely related coat silhouettes and Fair Isle sweaters. D&G and Dsquared2 were so theme-driven this season that they showed some outfits in matching his-and-hers versions. Indeed, Dsquared2 based the styling of its fall women’s show on a young woman who puts on a man’s clothes after spending the night with him.

Shared traits are not usually so exact, but fabrics, palettes, silhouettes, references, staging and moods crossover all the time.

“More and more, we tend to see overlap in terms of style, fabrics, colors, etc., in what is shown for men’s to follow in women’s shows,” said Majed Al-Sabah, chairman of Villa Moda, with stores in Kuwait and Dubai. “We all understand that fabrics, materials, accessories, etc. are bought by the brands in bulk and they have no other choice but to maximize their use for both genders.”

Particularly in this economy, houses are eager to get the most out of their expenses and designers must optimize their time, especially those under additional constraints of pre-collections.

When it comes to spring-summer collections, designers have more opportunity to differentiate men’s and women’s because the time gap stretches to three months: men’s shows in June, women’s in September. Yet connections persist. After all, when ideas make waves, it only makes sense to ride those as far as possible. For spring 2009 there were versions for both sexes of Dolce & Gabbana’s pajama motif, Gucci’s Hawaiian tropicalia and Burberry Prorsum’s breezy rumpled layers inspired by the late film director Derek Jarman’s garden.

Such unity can only result when a brand’s creative director oversees men’s and women’s in equal measure. At houses where men’s direction is known to be a shared responsibility — such as Louis Vuitton, Lanvin and Versace, which have prominent men’s directors working under the house designers — the top designer’s vision comes through differently in men’s than in women’s, and the similarities across genders tend to be limited to the enduring house signatures and icons.

Houses with distinct creative directors for the sexes, including Dior, Hermès and Calvin Klein, have even fewer common threads between their collections, sometimes sharing no more than brand heritage.

And in New York, where men’s and women’s are shown simultaneously, collections can be related, but without any time gap there is no foreshadowing effect.

That still leaves a lot of major European shows where astute observers can read the men’s shows for signs of what’s ahead for women. The hints undermine the secrecy that is supposed to surround collections — perhaps one more reason to rethink the current fashion system as the industry faces a series of tectonic shifts brought on by the global recession. After all, if part of the purpose of a show is to dramatically unveil a new direction each season, the surprise is somewhat muted if the direction is known weeks before. It’s like a surprise party that the honoree is expecting.

“I have always thought that it is a waste of time, energy and cost to fly twice to both fashion weeks when both can be done in one go,” Al-Sabah said. “However, if the fashion world wakes up and comes out of its egos, we will all achieve smarter, more profitable businesses.”

This idea has not gained much traction for multiple reasons. Among them is the opinion — supported by most co-ed shows in New York — that when men and women share a runway, the men are easily overlooked. DKNY, Adam and Yigal Azrouël recently yanked men from runways altogether rather than continue having combined shows where men’s wear got short shrift. Marc Jacobs did, too, years ago. And Tommy Hilfiger has gone back and forth on the issue.

“As things stand, it is still important that each of our collections for men and women benefit from its own expression, environment and timbre,” said Van Noten, who shows in Paris. “We are happy, for the moment, with the status quo.”

But the current format will likely keep coming into question as men’s and women’s fashion continue on the path of convergence, and as long as the industry remains in cost-cutting mode.

“I think showing men’s and women’s together could be very interesting,” said Simons.

Dolce and Gabbana acknowledged that a combination of some kind would be difficult, but they wouldn’t necessarily oppose it.

“The possibilities are limitless,” Dolce said. “Change is an integral part of our creativity and seeing things in a new way is essential for us to move forward.”