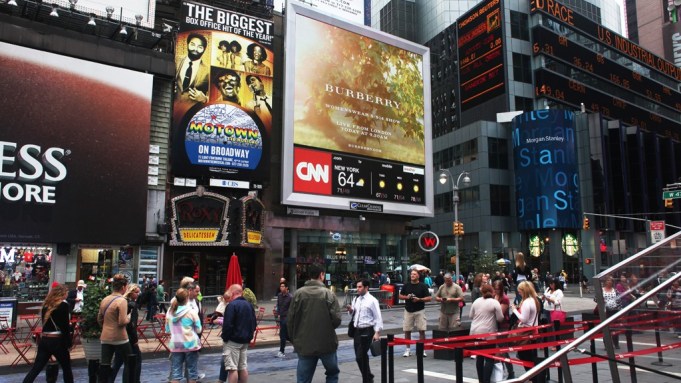 NEW YORK — Was it all worth it?

From New York to London, Milan to Paris, brands have spent the last month flooding social media to amplify — and prolong — the hype around their runway shows. Twitter, Facebook, Tumblr, Instagram, Pinterest and every other form of social media have been inundated with live-streams, tweets, posts and pins — and not just from the brands or designers themselves. Buyers, chief executives, editors, stylists, bloggers and pretty much anyone even vaguely associated with the fashion weeks sent out tweets and photos about anything and everything to do with them.

Which is why, experts contend, all that effort might not be the best way to get a brand’s message out there.

The sentiment among many is that fashion week programs, for the most part, are just a flash in the pan. Rather than focusing on social strategies relating to a 10-minute runway show during the weeks when every other brand is pushing out social content, focusing on developing a longer-term strategy could result in a more significant return on investment.

“People are having a hard time combing through all the hashtags,” Shelly Socol, executive vice president and founder of digital agency One Rockwell, told WWD. “There is so much going on that it’s becoming overwhelming. It’s too much information too fast. Everyone is viewing everything at once, and they can’t even decipher what they want and what they don’t.”

Unless there is massive spend and efforts allotted to the space — think Burberry’s live-stream for its women’s spring show that was broadcast on 13 outdoor screens in London, New York and Hong Kong and, according to the brand, was its “biggest show ever in terms of social media” — it might pay to keep the focus on the bigger picture.

Stuart Weitzman kicked off its #madeforwalking campaign featuring Kate Moss during Milan Fashion Week, including a video featuring Moss and a multilayered social media initiative. The YouTube link garnered more than 204,000 hits, and Instagram followers grew by 72 percent, but entries for a user-generated Instagram video contest failed to meet expectations. What went wrong?

The lack of engagement can be contributed to two factors: the overcrowded digital space during that period and the barrier of entry for the contest being too high. It was too time-consuming and cumbersome for users to create their own videos to submit to the contest.

While users might like to consume videos, getting them to create their own and submit to a brand via tagging with a dedicated hashtag is another story.

“We knew going into this campaign that 99 percent of people consume content while only 1 percent create it. Asking people to create video on Instagram was pushing the boundaries of social media because it’s a new application on this platform,” said a spokesman for Stuart Weitzman.

“It’s a perfect example of how you can get lost in the shuffle. It’s timing. It’s a matter of where you want to spend your efforts and dollars during fashion week, and knowing that the space is completely flooded. Everyone is moving from one city to the next — it’s a caravan — and you can definitely lose out,” Socol said.

Socol — who counts Sam Edelman, Tracy Reese, Mara Hoffman, James Perse and Calypso St. Barth as clients — is adamant about brands devising a digital blueprint for their online strategy, including social media, e-commerce and marketing efforts. She believes those brands with a long-term strategy — and the ones that execute these campaigns during a time when the space isn’t as inundated — are the ones that will win.

For example, Hermès kicked off an omnichannel program Oct. 1 welding its Silk Knots app with a Silk Bar pop-up at the Time Warner Center in New York’s Columbus Circle, but did little digitally surrounding its spring runway show in Paris on Oct. 2. Instead, Robert Chavez, president and chief executive officer of Hermès USA, revealed that the company is investing heavily in digital as it pertains to developing apps and marrying the on- and offline experiences. He told WWD that digital spend will triple in 2014 — jumping from 10 percent to a third of the overall media budget.

Macala Wright, digital marketing consultant, founder and ceo of Why This Way and editor-in-chief of FashionablyMarketing.Me, thinks that runway live-streams have become a limitation for designers. The novelty has worn off, and return on investment for these 10-minute videos has started to dwindle for a host of reasons, including designers adopting the same filming techniques and similar event formats. It’s because of this that live-streams don’t go viral, and in many cases hardly garner more than a few thousand views.

“Most designers are not seeing the value of redefining, although the social technologies and platforms do exist to help them be very creative with their approach,” Wright told WWD. “Designers are hurting the industry and themselves by not focusing on and investing in differentiation of experience, as much as they focus on and invest in differentiation of actual clothing design.”

She cites platforms like Bumebox and Thismoment as having the social frameworks that allow for creative differentiation. Bumebox takes real-time social integrations (like live-tweeting sessions and Twitter), and it has powered social marketing experiences for the likes of eBay, NBC, Kenneth Cole and ESPN.

Tory Burch partnered with Sony this fashion week, becoming the first runway show to be shot with ultra-high-resolution 4K filming. The brand worked with digital creative agency Firstborn to build a microsite at runway.toryburch.com highlighting the spring collection shown Sept. 10. Each look was broken down — from fittings leading up to the show, to behind-the-scenes and details. The content was posted in real time before, during and after a live-stream. There was also a commerce component, and consumers in the U.S. were able to preorder accessories.

According to the brand, views for the spring live-stream were up 81 percent from the fall 2013 one, which aired on the brand’s main Web site, toryburch.com.

Beyond live-streaming, Wright also noted that promoted tweets and Facebook posts during New York Fashion Week are “static” for the most part — targeted at fan acquisition instead of retaining them or driving them to a point of purchase. There were exceptions, such as Diane von Furstenberg, DKNY, American Express and Google’s Moto X.

“[These organizations] appeared to have strategy behind their social ad buys for spring 2014. From targeting key word terms to hashtags that then led me to a relevant destination, it brought me to take an action aligned to some higher marketing goal,” Wright said.

DKNY celebrated the brand’s 25th anniversary during London and Milan Fashion Weeks, and the brand promoted the #DKNY25 hashtag from Sept. 16 to Sept. 18. According to Aliza Licht, senior vice president of global communications at Donna Karan, it garnered 773,524 impressions with an engagement rate of 2.51 percent (the industry average is between 1 and 3 percent).

“I could have promoted various parts of NYFW on Twitter, but honestly, there’s so much noise that I wanted to focus on something specific and strategic,” Licht said.

While brands continued to push their messages out on Twitter and Facebook, the spring shows were all about Instagram, with the medium’s four-month-old video capabilities tipping the balance this season for New York University think tank Luxury Lab, or L2, editorial director Johanna Cox.

“As someone who follows the shows pretty closely every season, I never felt more in touch with the front row than I did this past month via those feeds,” Cox said of videos created by Victoria Beckham, Leandra Medine, Net-a-porter and Moda Operandi.

Dannijo worked with Olapic for its fashion week presentation to join the social and e-commerce experiences. The technology, which in July secured $5 million in Series A funding led by Fung Capital USA, allows a brand to take user-generated images or videos on Instagram, Facebook, Twitter or direct upload, group those assets and present them on its digital flagship with links to product pages.

Dannijo saw a 400 percent increase in photos using the dedicated hashtag #dannijodoesnoir the evening of the presentation, compared with a normal day of culling photos using any brand-related hashtags, and Dannijo.com experienced a 35 percent lift in traffic to the site that same night.

Pinterest, which launched its first fashion week hub on Aug. 28, partnering with more than 100 influencers to populate the portal — including Michael Kors, Kate Spade, Nordstrom, Oscar de la Renta, Harper’s Bazaar and 3.1 Phillip Lim — proved to be less relevant when it comes to the real-time nature of fashion shows.

“Pinterest is showing us that where Instagram and Twitter are better for the live aspect of fashion shows, Pinterest is better for the backstory and lifestyle,” Curalate ceo Apu Gupta told WWD of the research conducted by the marketing and analytics agency. “What’s being shared on Pinterest is more aspirational and inspirational. It’s the difference between newsprint and a glossy.”

Exhibiting the differences, blogger Wit & Delight generated the most impressions on Pinterest during New York Fashion Week with 74 million — 60 percent more than Harper’s Bazaar, which had the second-most impressions, with 43 million. Wit & Delight has 2.7 million followers on the platform, while Harper’s has 4.7 million.

“The number of blogs that are driving fashion week engagement is astounding. It makes you wonder if there is a completely changing role in the world of fashion and how it’s being covered,” Gupta said. The study showed that six of the top 10 pins came from bloggers, while just two came from traditional media (InStyle and Harper’s Bazaar).

For example, Wit & Delight and Harper’s Bazaar both pinned the same Diane von Furstenberg dress — and even though the blogger has two million fewer followers than the magazine, her image was repinned more times.

Lauren Conrad nabbed the top spot across several categories, including the top board (ranked by repins per pin) and top pin. She also had the most repinned pin — “New York is always a good idea” inside a black frame.

“From Pinterest to Facebook, Instagram to Bumebox, what brands, consumers, designers and fashion industry folk are now relying on is for the technologies to curate and organize what’s happening at fashion week. It’s so overwhelming that we can’t find and disseminate key information found in these events to make sense out of them,” Wright said.