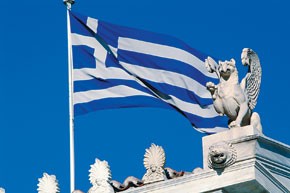 The top 10 countries ranked by the percentage of residents surveyed who say they buy designer brands.

The fashion-obsessed don’t only live in New York, Tokyo, London or Paris these days. As part of its recent Global Designer Brand Survey, The Nielsen Company asked 25,000 consumers in 48 countries if they bought designer brands when they shop. (Neither the term “designer” nor price points were specified to respondents.) While some of the top countries may surprise, it turns out all 10 boast well-known shopping streets and plenty of designer boutiques — including ones for local brands. And most of the countries also hold their own fashion weeks. A word to designers who are looking to expand globally — if you haven’t entered these regions already, it might not be a bad idea.

This Mediterranean country’s residents have loved fashion since before the Parthenon was built. “Classical Greek fashion back then — and to this day — has tended to mark social distinction,” noted Todd Davis, a Ph.D. candidate in Greek History at Columbia University. “So you could expect greater attention to detail and accessories by upper-class women.” Grecian draping has inspired designers worldwide, with Laura Poretzky for Abaeté, Esteban Cortazar for Emanuel Ungaro and Anna Molinari for Blumarine recently featuring the theme in their collections. Greek designer Sophia Kokosalaki, who showed her fall collection in Paris, often incorporates the theme into her pieces. In Athens, shops near Kolonaki Square house both international and Greek designers and include local specialty stores such as Sofos, Ritsi and Jade.

From Lane Crawford’s flagship in Central to the luxury watch stores on Nathan Road in Kowloon, shopping is a major pastime in Hong Kong. “In Asia, I believe possession of luxury brands has evolved from the occasional indulgence to daily ritual,” Yvonne Lum, Nielsen’s Hong Kong-based director of retailing research, said. “Owning luxury-branded goods is no longer just to showcase one’s wealth, it is also to showcase one’s class.” Some Hong Kong-based fashion brands include Baleno, Esprit Holdings, Giordano and Shanghai Tang. Coach is putting the finishing touches on a major flagship here, set to be the company’s second largest in Asia. The 9,500-square-foot store will span two floors and will be the eighth Coach shop in Hong Kong. The store itself sits to the west of retailers such as H&M, Nike and Esprit.

WWD reported last week that Stella McCartney will open six stores in India over the next two years as a result of a new distribution deal with TSG International Marketing Pvt. Ltd. Other entrants into the region: Italian fashion house Etro opened a location last year, while Hermès and Fendi both plan to open a store in Delhi this year. Rakshit Partha, managing director of Nielsen India, said, “The economic boom in India is churning out a large number of millionaires, who are looking at designer brands to advertise their newly found status. Indian designer shoppers prefer well-known brands such as Louis Vuitton and Gucci, which have an international high-profile image — and also because both these brands have opened up large stores in India in the past few years, making their products more visible and accessible to buyers.”

Designers and retailers are betting big in cities — or emirates, in this case — like Abu Dhabi (currently touted as the richest city in the world) and Dubai. For example, WWD reported last month that Bloomingdale’s appears ready to take its expansion overseas — the retailer’s first stop could be the Dubai Mall, according to real estate sources. The mall is under construction for a late 2008 or early 2009 opening, and is planned to be the largest in the world: It will encompass about 10 million gross square feet, including 3.8 million for retail, and the world’s tallest building — the Burj Dubai, with more than 200 floors and an Armani Hotel at its base. Akash Pal, head of consumer research for Nielsen UAE, told WWD, “People usually come here to live the high-end, luxurious lifestyle. Therefore, consumers here are very image-conscious, and awareness about designer brands is high.”

The country, located on the Baltic Sea, boasts its very own fashion week in Poznan, Poland’s fifth-largest city, located to the west of Warsaw. Meanwhile, in Warsaw is Arkadia, a mall that houses 180 shops such as Tommy Hilfiger and Pierre Cardin, 20 restaurants, a 15-screen cinema and 4,000 parking spaces. In Krakow, one of the oldest cities in Poland, Old Town remains a vibrant hub with numerous landmarks, museums, art galleries, college universities, music venues, theaters and restaurants. The Galeria Krakowska, a shopping center with 270 stores, is located here and houses everything from Versace and MaxMara to H&M and Zara.

“The international luxury community is taking notice of the Philippines,” WWD reported in February. “In fact, retail — including the luxury and high-end variety — is alive and well in the Philippines, with its booming economy.” Last year, the gross domestic product grew by 7.3 percent. Greenbelt 5, the latest addition to the development of the Greenbelt Mall, based in Manila, opened in October. Tenants include Balenciaga, Marc by Marc Jacobs, Paul Smith, Banana Republic, Rafe and Celestina. In December, London-based market-intelligence firm Euromonitor ranked the Philippines ninth among Asia-Pacific region countries in terms of projected 2007 clothing and footwear retail sales, with $1.5 billion.

Looks as though cheese and wooden clogs aren’t the only two items Netherlands residents own. Amsterdam, the Netherlands’ capital, is the largest city and features several shopping areas. Pieter Cornelisz (P.C.) Hooftstraat, considered to be the Fifth Avenue of Amsterdam, is home to designer brands such as Chanel, Gucci, Hermès and Louis Vuitton. And Kalverstraat, a pedestrian-only street, houses a variety of chain clothing stores such as H&M, Mexx and Zara. Meanwhile, other retail players are making their way into the region. Levi Strauss & Co. recently opened a location here, while handbags and accessories brand Tumi will open a store here this year. Mikael Schiller, president of Stockholm-based Acne Jeans, told WWD last month that it has plans to enter the region, as well.

A study conducted last year on the world’s most expensive retail locations by Cushman & Wakefield said retail rents on Dublin’s Grafton Street averaged $669 a square foot — the sixth highest in the world. Grafton Street houses well-known department stores such as Marks & Spencer and Brown Thomas. Henry Street also features department stores such as Arnotts, along with a variety of popular clothing and footwear stores. The Jervis Shopping Centre is also here, and stores such as Debenhams, Marks & Spencer and Bershka can be found. Designer Daryl Kerrigan, who showed her two fall 2008 collections (Daryl K and Kerrigan) in New York, also hails from Dublin.