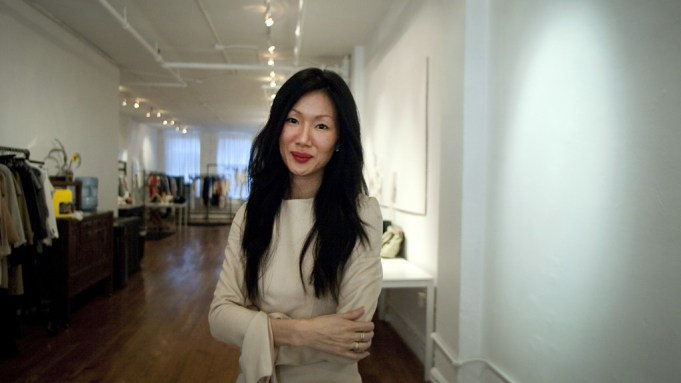 Marissa Webb spent more than 10 years in the J. Crew boot camp, working as head of women’s design with Jenna Lyons and Mickey Drexler, when she left to pursue her own line in 2011.

“A lot of people ask me, ‘Will your collection look like J. Crew?’ ” she says while prepping the collection over the summer. “The honest answer is: In my mind, no. But after being at J. Crew for 11 years, a lot of my own personal aesthetic is in J. Crew, because that was my job. The same things that influenced me then influence me now.”

Her first presentation, held at Lincoln Center in September, drew on the masculine-feminine point-counterpoint that is key to J. Crew, but Webb’s version was a little tougher, a little more sophisticated and urban, with an emphasis on leathers—tunics, biker shorts and motorcycle pants—along with graphic black and white. The line is priced at upper contemporary, starting around $125 for a T-shirt up to $1,500 for dresses.

Bedrock Manufacturing Co., the Dallas-based firm that also holds Steven Alan in its stable of fashion ventures, has a minority stake in Webb’s business. Steven Alan, in turn, is handling her sales, thus is also one of Webb’s eight retailers.

CV: Studied at Fashion Institute of Technology; worked at Club Monaco, Polo and J. Crew before launching her line for spring 2013.

Julien David is a prime example of just how global the fashion trajectory can be. A native of Paris, he honed his craft in New York. After eight years, he participated in a year-long French cultural exchange program with Japan, which inspired him to move to Tokyo and launch his own label. It started with scarves, gradually evolving into outerwear and ultimately a full women’s and men’s collection.

Today, David, 33, brings a distinctive point of view to the industry by melding Japanese culture with French expertise. Known for his accessible streetwear accents, his quirky touch sets him apart from other emerging designers. For spring—David’s third runway show—he riffed on schoolgirls gone bad with blazers and pleated skirts rendered with a Japanese wit, particularly evident in his mix of striking prints.

“There is a different approach here,” David says of his adopted hometown. “They don’t have the weight of the history of Western clothes. They perceive and mix pieces very differently. It’s much more playful.”

David, who is self-financed, won France’s prestigious Andam Fashion Award in July, giving him a 230,000 euro (about $300,000) boost along with a two-season mentorship from Pierre-Yves Roussel, chief executive officer of LVMH Moët Hennessy Louis Vuitton’s fashion division. While the recognition has made him think about spending more time in Paris, David is not quite ready to leave Japan. “Everything seems so organized, but at same time it’s so busy and so lively,” he says. “I think that’s what seduced me.”

CV: Studied at Parsons The New School for Design; worked for Narciso Rodriguez and Ralph
Lauren before launching his line three years ago.

Design Philosophy: Cool riffs on streetwear with plays on proportion and volume, all worked in upscale fabrics.

Serkan Sarier was savvy in his debut for spring 2011: Show a tight edit—12 looks—to a select group of editors and buyers in New York a few weeks after they had returned from the Paris shows. He got all the right eyes on his designs without the distraction of the glutted New York schedule. An exclusive with Barneys was secured. It helped that the clothes, washed silk taffeta dresses that countered couture constructions with sporty details, were as impressive as Sarier’s launch strategy. He learned from experts in various studios before going out on his own.

The modern contrast of classic eveningwear and tech elements has remained at the core of Brood, even as Sarier, 31, has developed the look with color and print. His spring collection, based on the rose and how it’s been portrayed throughout history, was his strongest yet.

“The visual expression of the rose changed through the 19th century, the Art Deco period, the Forties, the Eighties, but the message of the rose is the same: true beauty,” says Sarier, who runs Brood independently. With that comes the struggle with price. “We had a lot of interest from stores, but the price is quite high, which is challenging for a young designer,” he says. Thus, for spring he focused on getting a good selection of the collection under $1,000.

Simone Rocha, the 26-year-old daughter of Dublin-based designer John Rocha, is making her own name with a girly-meets-garçon-esque collection. For a young designer, her vision is unusually clear. From the outset, her designs have been a combination of thoughtful and dreamy, sophisticated and unfussy, all crafted in traditional and technical fabrics and finishes. Her spring show featured dresses the color of yellow highlighter pens, circle skirts coated with plastic film and a gold hand-crocheted waffle-knit dress.

“I like the fact that the clothes can look a certain way on the runway, and then your hands can make more discoveries as they move over the fabric,” says Rocha, adding that she designs with longevity in mind. “It’s so important that the clothes are not trendy, that they have a life.”

Rocha owns the business with her mother, Odette, and for the past two seasons has been a recipient of the British Fashion Council’s and Topshop’s NewGen sponsorship, which has paid for her runway shows.

CV: Studied at the National College of Art and Design, Dublin, and Central Saint Martins; launched
collection for fall 2010.

With just two collections, Tanya Taylor has demonstrated the sure hand and polish of a seasoned designer with a focus on interesting textures and prints. Her clothes are full of commercial appeal and infused with plenty of charm.

Taylor found her fashion calling when taking an introductory summer course at London’s Central Saint Martins while working toward a finance degree at Montreal’s McGill University.

“When I started to think about what to do after graduating, I knew I wanted something a little more fun,” explains the Toronto native, who’s now based in New York. And so, McGill diploma in hand, Taylor, 26, enrolled at Parsons The New School for Design. With a second degree in fashion design, she landed a job on the Elizabeth and James design team, but after two-and-a-half years, she decided to venture out on her own.

“I was missing the business aspect I had learned and wanted to combine it with design, which naturally happens when starting your own company,” says the designer, who has silent investors.

Two seasons in, Taylor describes her aesthetic as “always feminine, lots of color. Texture is a focal point through interpreting and playing with knits.”

For her spring collection, she looked to Barbados for inspiration—which was no coincidence: “I am getting married there in April.”