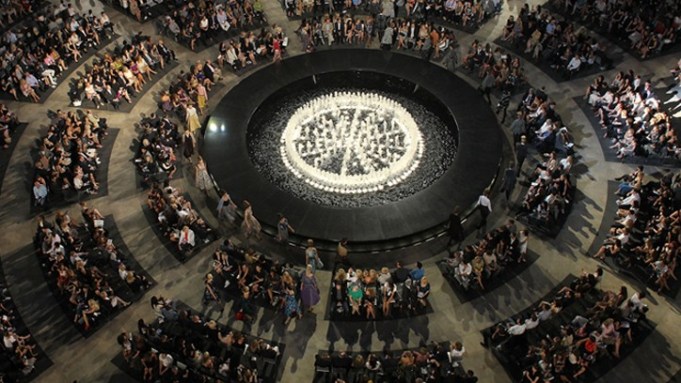 NEW YORK — Like most Lincoln Center productions, Fashion’s Night Out’s runway extravaganza on Tuesday was organized by act — all nine of them. And with a cast of about 150 top models and just as many costumes — 171 looks in all — it was a show to rival Wagner’s “Ring” cycle at the Metropolitan Opera (though it hopefully cost much less to pull off).

Once the general public, which forked out between $25 and $400 for tickets, took its seats, cue the fountain and the music — a clichéd mash-up of “New York, New York,” “Empire State of Mind” and Lady Gaga. Like any theatrical performance, there was no shortage of prima donnas here. Gisele Bündchen led a gaggle of girls such as Karolina Kurkova, Adriana Lima, Alessandra Ambrosio, Coco Rocha and Lara Stone, who arrived at Lincoln Center’s Josie Robertson Plaza atop a double-decker bus. Billed as the Opening Act and Grand Finale of the open-air show, complete with show closer Naomi Campbell, the models strutted past at a blink-and-you’ll-miss-it pace, wearing floor-sweeping skirts and FNO T-shirts. In between, every working model in the business walked the circular runway — although the big names like Bündchen and Campbell walked only the inner circle, where the VIPs sat. The clothes were grouped by seven of Vogue’s most important fall trends (among them Fifties Flair and Tartan Twist).

When the audience wasn’t gawking at the models, it had plenty to see in the audience. Almost every designer worth his or her salt was there, including Donna Karan, Francisco Costa, Elie Tahari, Tommy Hilfiger, Thakoon Panichgul and Carolina Herrera, along with celebs such as Ashley Tisdale, Blake Lively, Roger Federer, Serena Williams and Seth Meyers, who described himself as a “sore thumb.”

“It should be open to the people who are interested in fashion,” said Leighton Meester. “All these years of seeing people try to crash my shows tells me that the public is thrilled to see a live fashion show,” Michael Kors said.

Vera Wang had other things on her mind. “I’m worried about tonight,” she said. “These dresses are probably not what I would have picked [from my collection], but tonight is not about me.”

Lest one needed a reminder of what the point of the entire exercise was, Pharrell Williams provided an additional plug for Vogue’s cause: “Fashion’s Night Out. Have fun and go shopping.”