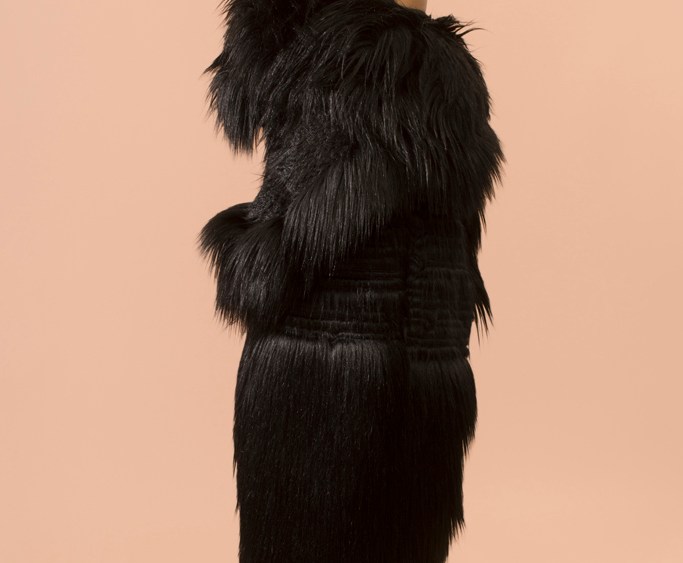 Something was different at Stella McCartney’s pre-fall presentation in January. The format was the usual: Take over a fancy-yet-personal New York City venue, in this case the top floor of the Upper East Side’s James Burden Mansion, which houses the Convent of the Sacred Heart’s Lower School, and deck it out like a playground for adult-size children. The models were playing lawn sports in updated versions of McCartney’s classic tailoring and knits. Then there was the girl playing Putt-Putt in what appeared to be a shaggy, Mongolian fur vest.

It was fake. Anyone with passing knowledge of McCartney’s politics is aware that she considers real fur — and leather, for that matter — anathema. And indeed the fuzzy vests, coats and hats in the pre-fall collection were tagged with patches that read “Fur Free Fur.”

The designer’s decision to put product out there that even imitated fur didn’t come lightly. “We have been looking at fake furs for years, but never felt it was the right message for us to promote the look of fur,” says McCartney. “But moreover, the material and fabrics that we kept seeing as a substitute were just not great nor inspiring enough to really be able to make a statement about it. Then after seeing probably over 200 hundred different kinds of fake fur, we finally saw the right ones we wanted to work with. We found something that looks great and is consistent with our philosophy on luxury and cruelty-free fashion; so it felt like the right time.”

She wasn’t the only designer who felt that way.

Faux fur has seen an uptick recently at the high-end of the market. In addition to McCartney — who used 100 percent modacrylic, which has been gaining traction as a high-quality and convincingly real fur alternative, and reprised the look on her fall runway — Dries Van Noten worked with fake fur for fall, as did Hussein Chalayan, Julien David, Julie de Libran for Sonia by Sonia Rykiel, Kate Spade and others. Then there’s British label Shrimps, launched in 2013 by Hannah Weiland, which until fall 2015 had been 100 percent colorful fake fur coats, many of them in bright colors with three stripes. Le Bon Marché in Paris sold out of them last season.

Weiland doesn’t wear real fur because of her love of animals (she’s also allergic to it), but she likes the look. Vintage wasn’t giving her what she wanted, so she came up with the concept for Shrimps. Considering the colors she uses — turquoise, pink, etc. — the furs are flagrantly fake and yet she still wanted a luxe look. A friend who worked for a children’s toy company put her in touch with a fabric source.

Like most designers, Weiland is protective of her manufacturing resources. She wouldn’t name the company that she used to make her first collection two years ago and still works with, but said that the original sample “was exactly as I wanted. I didn’t have to dye my own colors. How plush and how thick it is.”

Several U.K. retailers, such as Selfridges and online shopping portal Net-a-porter, have stopped carrying real fur — which is essentially what put Weiland in business. Natalie Massenet, executive chairman of Net-a-porter, saw English model Laura Bailey wearing a Shrimps coat and Weiland got a call requesting product. “It’s a huge company and can place big orders,” Weiland said. “That’s how I had the funding to get everything set up.”

Designers’ motivation for using faux vary, and perhaps surprisingly, of those interviewed for this story, the majority were not using fur alternatives for ethical reasons, although some are unresolved on their position. Chalayan, who included luxurious faux furs in his fall collection inspired by “Murder on the Orient Express,” says that he doesn’t adhere to a strict moral stance, “[but] I would find it more difficult to be part of a cycle where animals would have to be killed constantly.”

He sees the issue being a complex one for many customers as well. “There are definitely women who only care about the look, others who have ethical issues and won’t touch real fur, and some who won’t condone the use of real fur, but would not mind having a vintage piece as a one-off,” Chalayan says.

In most cases, designers are using faux fur because of aesthetics.

Van Noten, for one, likes fake fur because it’s fake. “I like to play with the connotation in every collection, he says. “I balance the beautiful and things that are not considered really beautiful. When I selected fake fur [for fall] I went to pale pink and a long shaggy ecru for one. But then to put even more question marks behind it we combined it with silk fake fur with stripes woven in and then also sometimes with real fur. You don’t know anymore what you’re looking at and for me that becomes the most intriguing way to make garments in fashion.”

Van Noten has been working with fake fur since the early Nineties, when, he says, it was considered in really bad taste. He’s always been drawn to contradiction between good taste and bad, not the ethical aspect or what would presumably be a lower cost for faux. He points out that the silk viscose fake fur he used for fall turned out to be nearly more expensive than the real fox and rabbit fur he also incorporated into some designs.

De Libran also allows both real and faux fur to coexist within the Sonia Rykiel collections, of which she’s artistic director, pushing the fake stuff for the house’s younger Sonia by Sonia Rykiel line.

“We like the faux-fur approach because it’s playful and fun. It provides incredible colors and volumes, which are not possible with real fur,” she says. “Ten years ago we could not have gotten that kind of quality.”

Technological advancements have been significant, particularly with the synthetic acrylic knitted fabrics, much of which comes out of Asia, according to Howard Strachman of Strachman Associates, a New York-based agent for faux fur. He’s been in the business, launched by his father in 1960, for decades.

David, who’s known for his innovative textile mixes, used a cotton jersey with a special long hair treatment from Taenaka Pile, a Japanese textile company that specializes in interiors. “As a rule, I don’t like to use synthetic fabrics to fake something because it doesn’t feel right,” David says. “But the technology is very advanced today and the new stuff looks amazing.”

One of Strachman’s main clients is Steiff Schulte, the German teddy bear company that has also become a go-to resource for high-end faux fur. It specializes in woven mohair, which is the natural hair of the animal but is acquired via shearing and thus is animal-friendly.

Steiff Schulte’s technique is rather traditional, having been in practice for at least a century. It is also proprietary. “You can’t guy to a supplier and buy these machines,” Strachman says. “You have to evolve them and tweak them and have technicians take them apart and put them back together to do what you want to do.”

In that regard, mohair faux fur is quite old school. It’s been circulating at the high end of the designer fashion market for years. Prada famously put a ton of mohair faux fur in its fall 2007 collection, and the German manufacturer’s other clients include Van Noten and Shrimps (the latter started working with Steiff Schulte for fall), while Max Mara has worked with them in the past.

Stephanie Hahn, founder of Stuttgart, Germany-based fashion label 22/4 swears by Steiff Schulte, noting that the options range from long hair to curly to close-cropped and the company uses exclusive dyes. “I’m a designer, I make fashion,” she says. “To me, optics is key.”

The price-value relationship also doesn’t hurt, she admits. “When retailers come to the showroom and look at the fake pieces, they don’t immediately recognize them as such and are stunned with the wholesale price I give them.”

Still, some of the faux stuff does not come cheap. McCartney’s Fur Free Furs clock in between $4,570 and $5,695 for a coat — with little price resistance. “We had a really positive reaction for the Fur Free Fur in general and it has been very encouraging and supportive, too,” she says. “And some people don’t care if it’s not the real thing as long as it looks and feels great.”