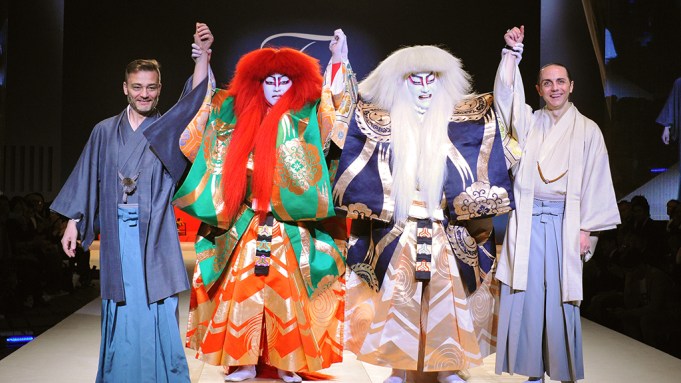 TOKYO — Fay, a historically American brand owned by an Italian company, is about to get just a little more global.

The brand, known for its luxe outerwear and upper-crust Italian clientele, is plotting future growth in Asia as part of a diversification push.

The Tod’s Group-owned brand currently does about 80 percent of its business in Italy and the remainder in other markets but Fay is hoping to recalibrate the sales breakdown to 50 percent Italy and 50 percent international over the next three years as it opens stores in Japan, South Korea and China, said Fay general manager Roberto Magnani.

“It’s a whole strategy that targets the three principal markets of the Far East,” he said on the sidelines of a Fay fashion show that took place Wednesday night at an outdoor courtyard of the Roppongi Hills complex.

Fay recently formed a partnership with Tokyo-based Sann Freres to open some 15 to 20 sales points and stores in Japan over the next five years, Magnani said. The brand’s first shop-in-shops at Isetan in Tokyo and Hankyu in Osaka will open in August while a freestanding store in Osaka is slated for September. Last year the brand opened its first South Korean store in Seoul through a link up with Shinsegae and Magnani said Fay will open another five stores in the country over the next three years. The executive said the brand is currently looking for a partner for China.

On Wednesday, Fay designers Tommaso  Aquilano and Roberto Rimondi reprised their fall-winter show for the brand, incorporating men’s into a runway format for the first time. The event also featured a mini performance by a pair of Kabuki actors. The designers emerged for their final bow in traditional men’s kimonos.

The designers said they are starting to rethink the way their approach their creative process as Fay attempts to internationalize its customer base.

“We are trying to change it but we you have to keep in mind that the brand is very strong in Italy and Italy is the number one market. So we have to both hold on to that and try to expand abroad. We have to balance,” said Rimondi.

Aquilano said the brand’s global efforts might help give Fay more of a “contemporary” feel for its home market of Italy. “Perhaps the [exposure] to international fashion gives you the opportunity to refresh your mind.”

The designers, who were heading to Seoul for a trunk show after Tokyo, said they were making the most of the trip to do some research for future collections.

“We have found vintage Japanese garments made from phenomenal fabrics,” Aquilano said. “They can be reinterpreted in a European way. We’ll see.”