Replacing Designers Apartment, the showroom is part of a broader strategy to better support emerging design talent in Paris, and will take place four times per year.

With the support of industry body DEFI, the Sphere showroom bowed on Jan. 15, and will be open through Sunday, featuring nine young designers.

The initiative will take place four times a year — in tandem with men’s and ready-to-wear — at the Palais de Tokyo, replacing Designers Apartment, which ran twice a year during women’s rtw, and benefiting from the venue’s location as a hub for fashion week events and services.

“We want to inject a new dynamism into our action [to support young talent], firstly by switching to four sessions per year, which allows us to better represent the men’s fashion world, and a reduced selection in each session, in order to truly accompany them, which takes time,” explained Serge Carreira, head of the Fédération’s emerging brands initiatives, who joined the organization in early October to spearhead the changes, and is in charge of a new department working uniquely with emerging talent.

“We don’t want to do more, but we want to do better,” he said. “The idea is to articulate these actions in the framework of a trajectory for young brands.”

Initiatives for the brands involved in the showcase will include mentoring and training — on legal and financial issues like fundraising, notably — to help them to grow professionally. 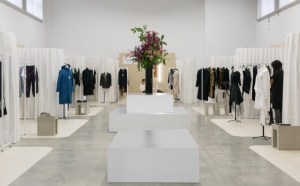 Inside the Sphere showroom.  Julie Berranger

The showroom will feature brands (around 10 in total for each session) in different stages of development — from those just starting out to others already on the official calendar.

“We want to articulate our actions in a coherent manner to intervene at the right moment in a young brand’s development,” Carreira explained.

Starting in February with Germanier, Kenneth Ize and Thebe Magugu, Sphere will also integrate international designers, who were not accepted under Designers Apartment.

“It’s interesting to be part of the general ecosystem, and to reflect the diversity of creation in Paris, because Paris is an international platform, not just a French platform, and that’s essential to our dynamism and creativity,” Carreira said.