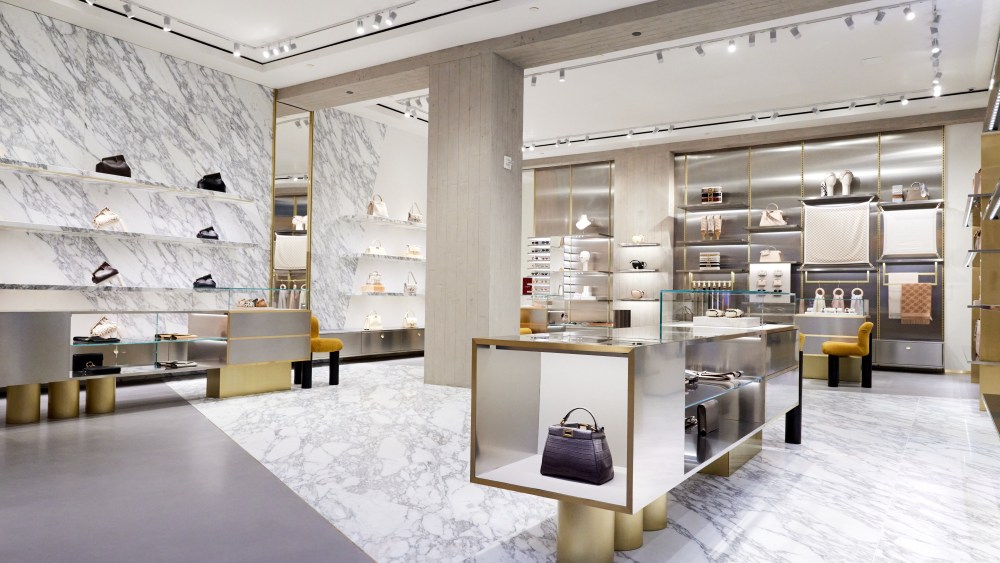 Fendi is making a major statement on the return of New York City.

The Rome-based luxury brand on Wednesday unveiled a gleaming 6,900-square-foot flagship on the corner of 57th Street and Madison Avenue. The two-level space in the historic Art Deco-era Fuller Building most recently housed a Coach store and replaces the brand’s former 4,100-square-foot store directly across the street.

The opening of the boutique, which was designed by Fendi’s in-house design team in collaboration with artistic directors Kim Jones and Silvia Venturini Fendi, also served as the global introduction of Jones’ debut women’s ready-to-wear collection and offered the first in-person peek at his inaugural couture designs, which were unveiled just last week during Paris Fashion Week. The New York store had the exclusive on both collections for its opening day on Wednesday, and they will be offered to the rest of the world today. The men’s collection, designed by Venturini Fendi, launches in select stores today and all doors by July 29.

Jones said of the flagship, “The changing rooms give the sense of a personal experience that I love, as well as the open clean design of the space to showcase the collections to their best.”

Serge Brunschwig, Fendi’s chairman and chief executive officer, said the simultaneous launch of the collections and the unit’s opening is intended to represent a “great symbol and a signal of optimism: a new collection, new designer and new store. We hope it will be auspicious for us and for New York. A new chapter of Fendi history starts today.”

Brunschwig was unable to attend the opening because of continued travel restrictions, but Jones did visit the boutique on Tuesday as “a representative of the brand” and to see the collection on the sales floor for the first time, he said. “You get it first, and you get Kim to present it.”

All told, Fendi has 40 points of sale in the U.S., Brunschwig said, and while he declined to reveal what percentage of the brand’s overall business the U.S. represents, he said it is “a very important market. It’s the biggest country in the world for the luxury industry.”

The relationship between the U.S. and the Fendi brand dates back decades when the Fendi sisters opened a boutique in Bergdorf Goodman in 1975, creating what he calls “a very special link with America which hasn’t disappeared.” Since then, he said, “we’ve found ways to build the brand.”

While the pandemic did impact Fendi’s sales in the U.S., the situation is brightening. Brunschwig said the company is seeing a “revival of luxury spending” in regions such as the Southeast and West Coast. And New York is also starting to rebound, and he’s expecting the new store to jumpstart the business.

“New York is having another rebirth,” the CEO said, “as it has so many times. Never write off New York. It will be stronger than ever.”

As business returns, Fendi will be prepared to showcase the best of what it has to offer in the store. In addition to the women’s and men’s rtw, the store offers leather goods, accessories, jewelry and shoes. The store also marks the debut of the Fendi First bag, a selection of jewelry and earrings including the buzzworthy O’lock, and a new Fendi First shoe with an invisible heel. Large and small marble sculptures of the Fendi First bag are exhibited around the store, signed on the bottom by Jones and Venturini Fendi.

As a symbol of the building’s heritage from 1929, the facade maintains its original aesthetic. Six see-through LED curtains hang vertically for three floors showcasing images of Palazzo della Civiltà Italiana, Fendi’s headquarters in Rome. The windows are inspired by Fendi signature logos modernized by reworking parchment leather from  archive trunks, along with Selleria stitching, gold metal accents and the silhouette of the brand’s classic bestselling Peekaboo bag.

One highlight of the store is a jaw-dropping sphere suspended from the center of the second floor with a modular ceiling and illuminated by round lamps. The sphere is visible from the street and accessible to customers through a floating mirrored walkway. Once inside the dome, two marble sculptures of the Fendi First bag are on display, alongside the real-life purses.

The interior is open and airy with industrial cement columns and beams accented with marble, brass and steel, and plush carpets. The Arabescato Vagli marble was chosen to be reminiscent of the architecture of Roman churches.

A marble staircase leads to the women’s rtw department on the second floor. The open space area in a soft palette of ivory and natural tones accentuated by gold is complemented by Italian-designed furniture. Tucked in behind sliding three-dimensional brass doors is a VIP room with curved ivory mohair walls and pink carpeting.

On this level is a special lounge with glass walls that can be closed off behind ivory curtains decorated with an archive version of the FF logo designed by Karl Lagerfeld. The lounge can be used to host special private client or customer events.

Adjacent to the lounge is the men’s area, which has a different aesthetic with its leather sofas and wooden accents.

Throughout the store, the fitting rooms are showstoppers with fur benches, different colored marble walls and metal ceilings.

In order to introduce the store to New York, Fendi is launching an advertising campaign shot by Craig McDean that Brunschwig said will be used in print and outdoor marketing, the latter of which will launch in September in New York, Los Angeles and Miami.

On July 21, Fendi will also create a 360-degree virtual store tour of the flagship on its website so customers can shop the boutique from anywhere in the world. Visitors will be able to virtually experience exclusive services and spaces such as VIP rooms, create wish lists, and live chat with associates.

In addition to the flagship, Brunschwig said a new rtw shop is opening at Saks Fifth Avenue to showcase the collection.

Brunschwig is confident that Fendi will reap the benefits of these updated retail locations and he has “extremely high expectations” that customers will respond positively to Jones’ new designs. “He really worked on a new silhouette and some new icons that are based on our history and work super well together,” he said. “And when you enter the store, you really feel the collection.”

Fendi was established by Adele and Edoardo Fendi in Rome in 1925 and was designed by the late Karl Lagerfeld for 54 years until his death in early 2019. In 2000, LVMH Moët Hennessy Louis Vuitton became the majority shareholder in the company and in September 2020, Jones was named artistic director of couture and women’s wear, while Venturini Fendi continues as artistic director of accessories, men’s wear and children’s.