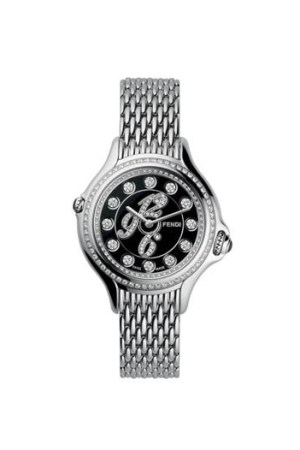 The luxury brand’s latest addition to its offerings has its own patent, based on the watch’s rolling mechanism that allows the wearer to change the color of the precious or semiprecious stone settings on the dial three times.

“We wanted a patented mechanism, something that was truly creative and unique in this field,” Fendi chief executive officer Michael Burke said. “We needed to do something original, unique.…Customers are looking for more and more, and especially during the recession, desirability is the key word that makes the difference between continuing to [prosper] or the recession killing you.”

Creative director Silvia Venturini Fendi said her goal was to create a pioneering timepiece. “We wanted to do something that was not available currently.…The idea was to launch something that’s never been done before — a very classical watch with a technological, futuristic touch.”

Venturini Fendi looked to “larger men’s watches — classical watches, like the classic Rolex,” she said. “I wanted to have a sporty feel done in a very precious way. But at the same time, we wanted it to be a 24-hour watch. I mixed it with this idea that it can be more or less discreet.”

Based on the wearer’s mood, outfit or social setting, there is a choice of three looks that display one of three settings for each gem, though there is always a diamond at 12. The gem at each number rotates, changing its color, when the wearer swivels the left crown. A Crazy Carats watch can be custom ordered, with stone possibilities including diamonds, sapphires and multicolored topaz. The timepiece is crafted in stainless steel, with several additional design options, including a black or white watch face and a diamond pavé outer bezel.

Burke said the degree of personalization harks back to “Rome aristocracy’s jewelry, where everything was unique and bespoke.…It’s part and parcel of what Fendi’s all about. It had to have gemstones and diamonds and it had to be bespoke. The major feature is you can design your own watch depending on what kind of stone or color you like. This watch is totally customizable.”

Although the brand has offered watches in previous years, they were fashioned out of ceramic and were not considered fine jewelry. Fendi’s decision to produce Crazy Carats suggests that more fine jewelry may be coming.

“To me, this watch is a little bit anticipation of what I’d really like to do at Fendi in jewelry,” Venturini Fendi said. “I would like to start doing a jewelry line, so this is kind of what I’ve been thinking about, developing precious jewelry.”

Crazy Carats watches will retail from $2,400 to $15,000 at 180 points of sale worldwide, including 67 Fendi boutiques beginning in October. The waiting list for a watch that is personalized to a customer’s tastes is a minimum of six months.