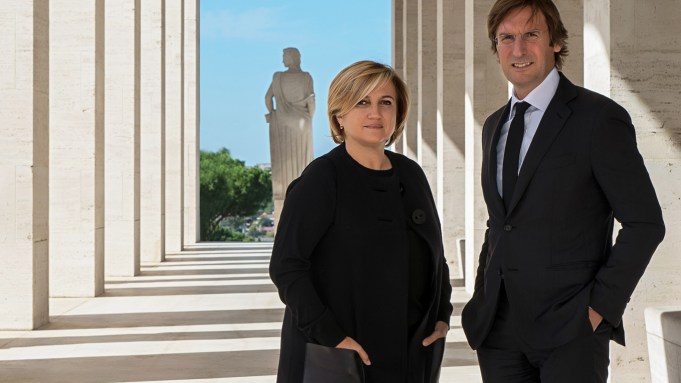 The first exhibition to be held at the venue, dedicated to the transformation of the palazzo and its surroundings, was also inaugurated at the event Thursday. Chairman and chief executive officer Pietro Beccari braved the chilly gusts of wind hitting the city to deliver a brief speech to introduce the lighting up of the building, thanking the five Fendi sisters and luxury titan Bernard Arnault for his forward-thinking attitude in supporting the move of the company, which is controlled by LVMH Moët Hennessy Louis Vuitton.

As guests later enjoyed freshly sliced prosciutto and mozzarella bites ahead of the dinner at the temporary glass structure set up on the roof terrace, Bernard Arnault, Karl Lagerfeld and Italy’s minister of reforms Maria Elena Boschi gathered in Beccari’s glassed-in office, which offered privacy to the entrepreneur — especially in light of the sudden departure of Raf Simons from Dior revealed earlier that day.

“This is a unique site, there is nothing like this in the world,” said a beaming Carla Fendi. A few steps away, Marco de Vincenzo, who has been working on Fendi’s accessories for years, was amazed at the quality of the light at the venue, with its countless windows. Beccari also underscored how both Lagerfeld and Silvia Venturini Fendi “love the light” they can work with at the palazzo.

Beccari earlier in the day told WWD that he thought “such a building should have a permanent illumination. Light is a symbol of life.”

For this reason, the executive tapped artist Mario Nanni to conceive the outside lighting, which enhances the building’s architecture, and the special effects for the evening event. These revolved around the theme of the sun, starting with an intense red hue, gradually rising on the marble steps leading to the building, and then turning white, as images of birds were projected onto the building and seen flying across its facade.

Perched on a hill overlooking the Italian capital, the 75-year-old travertine marble building, which features six stories of symmetrical arches and is nicknamed “the Square Colosseum,” is imposing in itself and the lighting is expected to further enhance its visibility. “Absolutely,” responded Beccari, asked if he would like the palazzo to become a tourist attraction.

The palazzo is “coming back to life,” he said. The structure had barely been used since World War II and, as a sign of Fendi’s intention to restore it to the city, the first floor is open to the public and dedicated to exhibitions and special events. “And this building is a dream for architects, people could only view it from a distance, they can now approach it and come in,” added Beccari.

The palazzo, which was both inspired by the work of artist Giorgio de Chirico and later influenced his works, is decorated with 28 statues on its facade, each dedicated to different “Italian virtues,” ranging from craftsmanship and agriculture to astronomy and archeology.

The 205,200-square-foot palazzo, designed in 1937 by architects Giovanni Guerrini, Ernesto Bruno La Padula and Mario Romano, was inaugurated in 1940 and was meant to be part of the international Expo of 1942, which never took place because of the war. Beccari underscored the significance of its reopening after years of neglect at a time when “there’s a lot of talk about the structures of the Milan Expo [ending at the end of October], the Italian pavilion or the Tree of Life [symbol of the exhibition] and what will become of them.”

Even though the city of Rome is facing challenging times following scandals ranging from the infiltration of organized crime to crumbling infrastructure and the mayor’s pending resignation, Beccari struck a positive note. “I appreciate the efforts of [Prime Minister Matteo] Renzi and the government to highlight what works as a starting point,” he said. “We are at a turnaround in the future of Rome. I am optimistic and we have invested on this, working on the restoration of the Trevi Fountain, the Palazzo della Civiltà, on works on the store in the city, bringing the Zuma restaurant there. Fendi is closely linked to Rome.”

The reopening of the Trevi Fountain, restored with funding from Fendi, will take place on Nov. 3, said Beccari. The Japanese award-winning restaurant Zuma will be located on the top two levels of the Palazzo Fendi store building, which will have a roof terrace. It will be the first such venture for the Italian luxury brand, and is expected to open in February.

Tourist traffic, with “an increasingly growing number of Chinese tourists,” contributes to the rebirth of the city. “Rome is no longer only a city to pass through during three-day trips between Florence and maybe Venice,” said the ceo. “Now it’s a destination.”

Fendi inked an agreement in 2013 to rent the Palazzo della Civiltà for 15 years, renewable for another 15, and has been working on the space for the past year. The building groups together 500 employees who were previously scattered in different offices throughout Rome. Architect Marco Costanzi, who also designed Fendi’s Milan headquarters on Via Solari, oversaw the palazzo’s restoration. While the cost of the project wasn’t disclosed, Fendi is paying an annual rent of 2.6 million euros, or $2.9 million at current exchange rate.

“This is one of Rome’s symbols,” said Silvia Venturini Fendi. “It has a big effect on me. It’s like living in a monument, and being here proves nothing is impossible. We also feel a great sense of responsibility.”

Venturini Fendi said she believes this is “a modern way to live a monument. It’s not only an empty container, it’s full of energy. This is a true monument to work.”

On the lower floor, the building houses Fendi’s fur atelier, where artisans work on precious furs. Up in the offices, dark wood cabinets are decorated with a motif reminiscent of the tablets used to create the furs.

The first exhibition, called “Una Nuova Roma. L’Eur e il Palazzo della Civiltà Italiana [A New Rome. The Eur and the Palazzo della Civiltà Italiana],” is open to the public until March 7. The exhibit displays an array of paintings, images, drawings, photographs and videos by Italian architects of the Nineties combined with design objects and historical images as well as works by artists ranging from Gino Severini, Mario Sironi, Enrico Prampolini and Francesco Messina to Pericle Fazzini and Giuseppe Capogrossi. Photos by Karl Lagerfeld and the likes of Fabrizio Ferri and Mimmo Jodice are also shown against a setting of curved mirrors or blue and red geometric structures. In addition, there are extracts of films from directors including Roberto Rossellini, Federico Fellini, Vittorio De Sica, Michelangelo Antonioni, Elio Petri and Bernardo Bertolucci. A section of the exhibit is also dedicated to furniture and design.