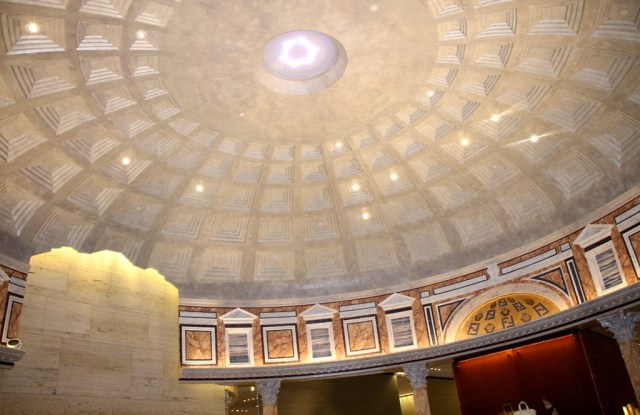 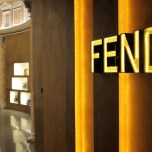 As stores at the Forum Shops got bigger — the world’s largest H&M opened last year, spreading across three floors and more than 60,000 square feet — Fendi was relegated to a tiny, 400-square-foot kiosk in the middle of the Las Vegas shopping center’s walkway. Despite its small size, Fendi’s Forum Shops real estate was valuable indeed. It’s been the most profitable retail location per square foot in Fendi’s portfolio. So when the lease came up recently, luxury brands battled with Fendi for the lucrative spot, but the brand won out, locking up the space for another 10 years and grabbing another 3,000 square feet next to the kiosk to build upon its Las Vegas business.

Earlier this month, the 3,000-square-foot store opened to become Fendi’s fourth location in Las Vegas, while the kiosk transformed into an adjacent shoe salon illuminated by a custom chandelier made of interlocking double Fs. The store’s pièce de résistance is its ceiling, which is a one-of-a-kind replica of the Pantheon’s dome. Crafted in Rome and shipped to Las Vegas by air in 14 pieces, the ceiling is made from resin fiberglass and is 33 feet in diameter. The store also features red, silver and gold travertine walls, lava stone floors and Fendi’s signature amber glass façade.

The Forum Shops store follows Peter Marino’s design concept for Fendi meant to pique shoppers’ curiosity with separate, intimate shopping environments. The front of the Forum Shops store is divided from the back and contains Fendi’s more fashion-forward pieces such as the Anna and Chameleon bags, as well Fendi’s heritage Selleria items. Historically, Fendi has put its logoed items up front at retail, but has moved away from that at the Forum Shops to make a strong fashion statement about the LVMH Moët Hennessy Louis Vuitton-owned brand.

The back of the store contains the logoed bags in addition to men’s casual wear and accessories, and baby clothes. Merchandise is priced from $180 for a jewelry charm to about $11,000 for top-tier handbags.

Fendi declined to project sales for the new location, but the brand’s experience at the kiosk has given it confidence it can attract a substantial consumer base at the Forum Shops to support a larger footprint. Annual sales per square foot at the shopping center are estimated to be at least $1,400 and, based on that figure, Fendi should be expected to reach annual sales of nearly $4.7 million at the Forum Shops.

Elsewhere in Las Vegas, Fendi has stores at the Bellagio, The Shoppes at the Palazzo and the Crystals at CityCenter.