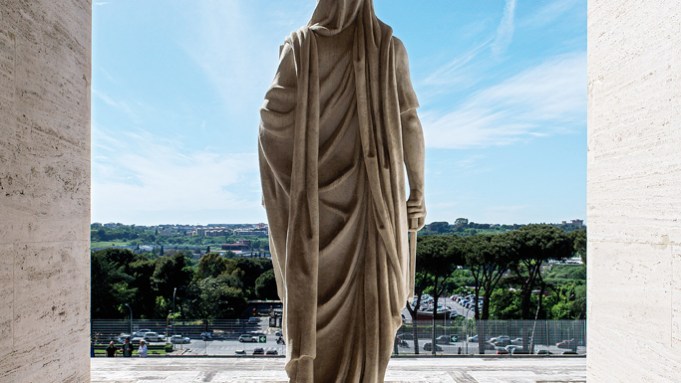 As it prepares to celebrate its 90th anniversary, Fendi is fusing its image with a beloved symbol of Rome—and it’s an impressive and imposing one at that: the Palazzo della Civiltà Italiana.

The project to transform the 75-year-old, never-occupied structure, which features six stories of symmetrical arches and is nicknamed “the Square Colosseum,” into new corporate headquarters for Fendi’s 450 employees was spearheaded by chairman and chief executive officer Pietro Beccari. “It was my dream to reunite all employees under the same roof, but the square footage available around town remained a problem,” said the executive during an exclusive tour of the site, due to be officially unveiled during a special event at the end of September or early October.

“We are thinking out of the box,” he said about the choice of venue, “but this is very Fendi. Both have a geometric and aesthetic concept and are associated with design and Rome. It all fits with Fendi and is an inspiration for the brand. The building was created to honor Italian excellence and Fendi is entirely made in Italy.”

Beccari also pointed to Fendi designer Karl Lagerfeld’s affinity for the symbolic structure. “Karl made changes to his last collection after first working at the palazzo, whose arches ringed the runway theater for spring 2015 and also inspired his fall advertising campaign. He likes it here and he has said that this is a spaceship that projects into the future. You can quote him, this is what he said,” reported the affable executive.

Although the striking 205,200-square-foot structure perched on a hill with a panoramic view of the Italian capital is a statement in theatricality, its grand scale and location contributed to its neglect over the years—until Fendi stepped up. Renovations to the travertine marble palazzo will be completed by the end of the year to welcome employees who currently work in two offices in the city separated by a 30-minute drive. The house’s archives and its fur atelier will be located on the lower floor, while a 10,800-square-foot exhibition space on the ground level will hold art, history and design installations open to the public, as well as a café and bookshop.

The Palazzo della Civiltà Italiana, designed in 1937 by architects Giovanni Guerrini, Ernesto Bruno La Padula and Mario Romano, was inaugurated in 1940 and was meant to be a gateway from the coast to the city as part of the international Expo of 1942—which never took place because of World War II. “It’s symbolic that the palazzo will be officially unveiled in September at the same time as the Expo in Milan is taking place,” said Beccari, referring to the event that runs from May to the end of October.

Fendi inked an agreement in 2013 to rent the building for 15 years, renewable for another 15, and started working on the space in July 2014. The structure was “an empty box,” noted Beccari, as it was incomplete and had barely been used since the war, although in June 2013 Giorgio Armani held his One Night Only event in part of the palazzo. The exteriors did not require any significant renovation, but the interiors needed to be reformatted for office purposes.

At Palazzo Fendi on Via Condotti in central Rome, the former offices will most likely be converted into a center of cultural interest and the flagship is slated to expand onto a third level that will include a space dedicated to VIP customers.

Architect Marco Costanzi, who also designed Fendi’s Milan headquarters on Via Solari, is in charge of the interior design at Palazzo della Civiltà Italiana. The original marble floors and staircases and mid-century lamps, recovered from the cellar and restored, contrast with the light and modern open-concept offices set beneath 26-foot ceilings. A walk through the design office showed dark wood cabinets decorated with a motif reminiscent of the tablets used to create the label’s signature furs. “This airy and modern space seems to help us look ahead with confidence,” mused Beccari.

At the center of the building is an open-air cubic space, soaring upward 157 feet, which the company is bridging with a futuristic steel and glass structure.

The palazzo, which was both inspired by the work of artist Giorgio de Chirico and later influenced his painting, is decorated with 28 statues on its facades. Beccari called it “a tribute to Italian craftsmanship, in line with Fendi’s own Italian know-how and heritage.” There are also four equestrian sculptures depicting mythical Greek heroes.

“This is a natural stage,” said Silvia Venturini Fendi of the palazzo. “Romans love this building and we wanted to return it to the city.” She also praised Beccari’s job in leading the brand and selecting the venue. “Pietro is an Italian, he understands the roots of the brand.”

Fendi also underscored how the label has possibly become even more Italian under the LVMH Moët Hennessy Louis Vuitton umbrella. “When you become part of an international group, the value of the specificity of a brand becomes fundamental, even more than before, and Fendi is strongly rooted in history,” she said.

For this new piece of history, the company is paying an annual rent of 2.6 million euros, or $2.9 million at current exchange rate. “We are creating synergies and cutting back on a number of different rents throughout the city,” noted Beccari, who declined to reveal the cost of the renovations. “Let’s say we did a good job with a reasonable amount,” he said with a smile.