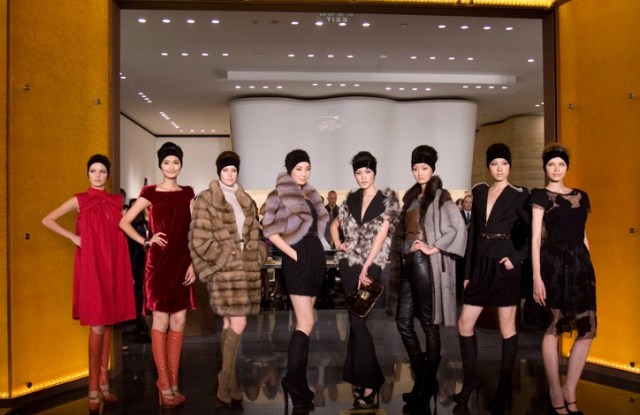 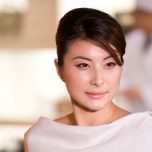 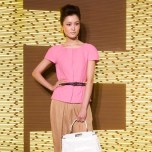 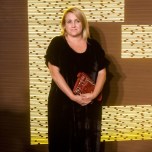 “Apart from staff problems it is easier to do business in China than in Italy because it is a country that values work, values speed, looks to the future and wants to progress,” he said. “It is an exciting moment in China, when everything is possible.”

Those possibilities include the brand’s landmark fashion show on the Great Wall of China in October 2007 — and now the opening of its largest store in the Asia-Pacific region, spacious enough to include a room dedicated solely to furs and with its two floors dominated by a fountainlike chandelier.

The new store, Burke said, represents the maturation of Fendi’s China presence. “It’s gratifying to see, finally, a store that tells the whole story of the brand….Ours has been the standard China development track: start in a hotel lobby, from the mid 1990s through about 2002. Then it was a freestanding storefront, with the consumer sophistication growing, but not to the point of selling $100,000 sables.” The flagship, three years in the making, marks the beginning of a third phase. “Now, Shanghai is no different from Fifth Avenue in New York.”

Burke recalls observing firsthand all those stages, starting in 1995, the same year Fendi first arrived in Shanghai with a store in the old Hilton on Huaihai Lu. Back then, he reminisced, “there were none of the same airports as today. You had to know how to push and shove to get onto the plane. Now it is more civilized than many cities in Europe. It was all bikes and bikes and bikes then. And much noisier.”

Burke was also in Shanghai during the 1999 opening of the Nanjing Lu luxury destination Plaza 66, but at that time for the launch of the Dior store that still occupies a prominent corner on the first floor. “Plaza 66 is the granddaddy of Chinese luxury malls,” he said. “It set the tone and has led to hundreds of projects now in the planning and finalizing stages, but it is still the top.”

He cited as rising contenders Beijing’s Shinkong Place, Charter malls in Guangzhou and Shenyang, and others in Hangzhou, Chengdu and Shenzhen. “In the next two years, there will be a dozen equivalents of Plaza 66 coming out of the ground. There have been various ones that have lacked several elements, such as sufficient parking. It’s an almost magical mix. I think [China’s retail] real estate shortage is disappearing,” said Burke.

Fendi’s new Plaza 66 store is the by-product of the Great Wall show two years ago and “is the first of the next generation. All of our stores will grow to this size, reflecting the full range of Fendi, and showing that we’re not an accessories brand. That perception is what happens when you grow at this fast a rate” and stores in some cities are accessory dedicated. “That is why we did the show on the Great Wall, to show that Fendi is a fashion house. Because of the Great Wall, we can now have a room just of fur. It is the only store in China with a fur room. Also, China is becoming more sophisticated, and we sell more fur here than in the U.S.”

According to Fendi’s Asia-Pacific president Pierre Balsan, store performances differ little across different parts of China and different tiers of its cities; what matters is the product range available in the stores. “It’s similar if it’s a similar mix,” Balsan said.

Fendi has 16 stores in Mainland China. “The top ones are Shanghai, the two in Beijing, and Chengdu and Guangzhou,” Balsan said. “It took us a while to reach where we are now in business [at the first tier stores], but Hangzhou and Chengdu caught up very fast.”

Burke added: “China is our single-largest market in Asia. Our China strategy is our Asia strategy, plus traveling Chinese. While the 2009 numbers are not out yet, there were more Chinese than Japanese tourists in Rome this year, so more than any other nationality. Chinese travel differently than Japanese. Japanese travel to buy; Chinese do shop, but they bypass Milan and go to Rome. They don’t care for Milan because it has no history.”

One driver of international shopping by Mainland tourists is the duties slapped on luxury goods bought domestically. For Fendi, prices are 25 percent higher in China, said Burke.

On piracy, Burke said it “is a worldwide problem, not a Chinese problem — and more one of policing than manufacturing. I feel my country, Italy, should do better, and can’t blame China. It will take international cooperation, but it’s happening. Also, luxury is going back to smaller runs, more creativity, so it is harder for counterfeiters. The days of making 100,000 of the same bag are over, and that was good for counterfeiters. We have to stay one step ahead, and keep our supply chains strong.”

The economy presents less of an obstacle, at least within China, he said. “Six months ago there was a slight scare as exports dropped, but the Chinese government has been one of the most astute in managing the crisis, so despite the crisis we’re showing strong growth here.”

Internationally, he continued, “the recession in fashion is a problem of sameness. There is not enough risk taking, too much outsourcing; brands are not creative.” Three factors — “true creativity, true quality, and great service and fantastic store environment” — are necessary, and “if any of these are missing [in brands], they won’t make it through the recession.”