The Italian fashion house selected the Belgian industrial designer for its annual exhibit at the design fair. 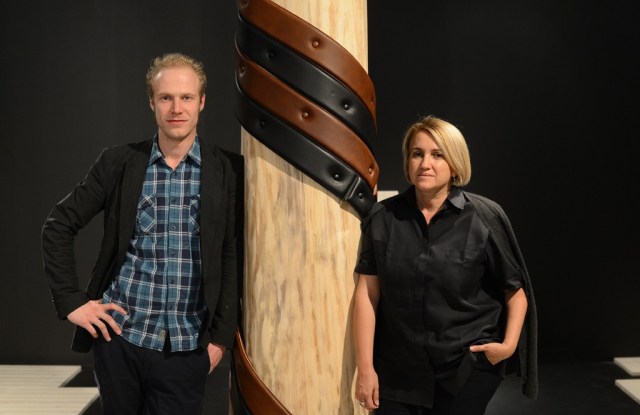 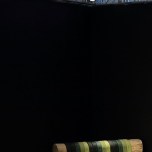 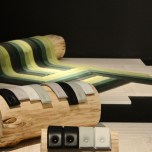 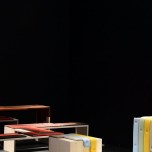 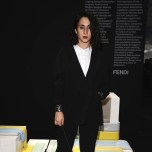 For this year’s Design Miami, which opened Tuesday in South Beach, Fendi chose to shine the spotlight on Belgian industrial designer Maarten De Ceulaer for its collaborative design series that straddles Fendi Casa and art. He mined the brand’s heritage of stripes and geometrics for “Transformations,” an exhibit based on the brand’s familiar pequin motif brought to life from two-dimensional textiles turned three-dimensional furniture and objets d’art.

“These are definitely more functional works than former collaborations,” said Silvia Fendi, who’s been on board with the fair for five years. “We were lying on his floor bed thinking about how to develop a bag that transforms into seating.”

The resulting wood slat bed’s decoration of leather straps in various greens extends over a tree trunk, positioned as a sort of headboard meets neck roll. Straps wrap around a vertical trunk on a sculptural version.

“The straps are meant to imitate organic matter, like they’re growing over the pieces like vines,” said De Ceulaer. “Geometrics are so indicative of Fendi, that I was instantly drawn to use them.”

Surprised a previous designer hadn’t paid homage to pequin, which launched in 1983 and has appeared on pieces from furs to bags, Fendi said it made sense even more so considering the spring 2013 collection’s themes of perspective and modular graphics. She’s warm to the idea of developing a deeper design collection versus an annual one-off, but is afraid function would trump freedom.

“We started this commitment in a soft way and didn’t realize its full potential,” said Fendi, who doesn’t take the responsibility lightly. “We’re like patrons to these designers, and there’s still so much more we can with them.”

Though De Ceulaer also showed tactile, bulbous furniture from his Mutation series through Industry Gallery’s booth at the fair and received a lot of attention for his graduation project “A Pile of Suitcases,” he was shocked by Fendi’s buzz factor.

“It’s like they beamed the message across the world,” he said.

After the vernissage, Fendi and chief executive officer Pietro Beccari hosted an intimate press dinner for De Ceulaer at the glamorous Latin American stomping ground Juvia. In attendance were her son Giulio Cesare and daughter Delfina Delettrez Fendi, whose jewelry is on view at Antonella Villanova gallery in Design Miami.

“When she comes over to visit, I say, ‘Go back to your booth!’ since we’re competition now,” Silvia Fendi said.