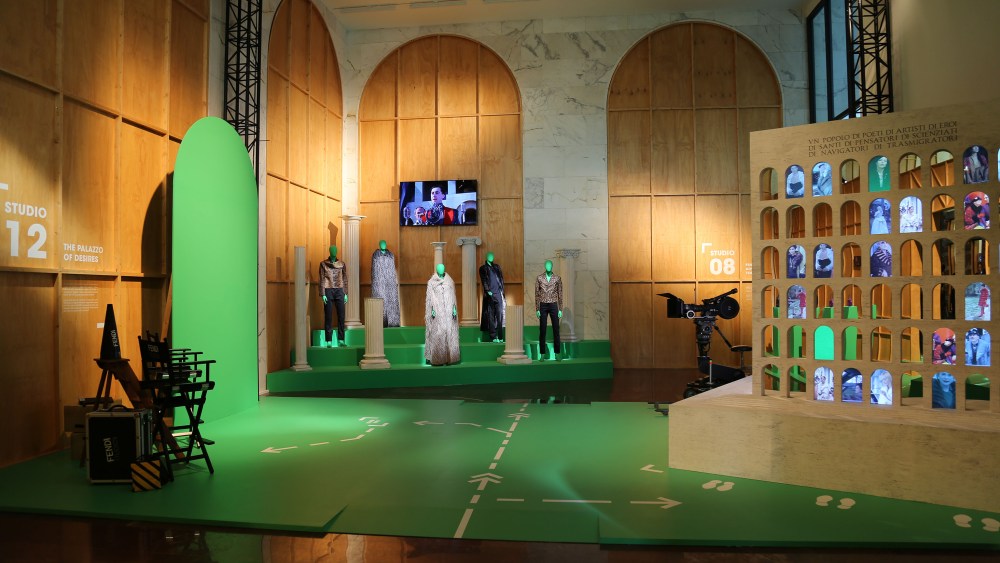 ROME — Make believe is the basic assumption behind any movie and “Fendi Studios,” the latest exhibition staged by the Rome-based luxury company, takes this one step further with the help of technology.

Fancy a drive in a red Alfa Romeo Spider as if part of “The Grand Budapest Hotel” or “Evita” Visitors can be photographed taking a seat in the vintage car, with images from the films superimposed, and the real furs, worn by Tilda Swinton and Madonna, respectively, displayed in the background.

“It’s fun, instructive, contemporary and digital,” said chairman and chief executive officer Pietro Beccari of the exhibition ahead of the cocktail on Thursday evening to officially unveil “Fendi Studios.” The inauguration of the exhibit at Fendi’s headquarters in the Palazzo della Civiltà celebrates the company’s long-standing relationship with the movie world and kicks off the city’s Film Fest.

Beccari emphasized the “authenticity” of the project, which makes it “even more appreciated.” The executive recounted tales of legendary director Federico Fellini taking a break to eat pasta with the Fendi sisters, whom he called “Fendine.”

The list of movies Fendi has worked with over the years is impressive, from Luchino Visconti’s 1974 “Conversation Piece” to the most recent “Zoolander 2” — which was also filmed at the Palazzo. Beccari himself is friends with the likes of costume designers Piero Tosi and Milena Canonero and director Sofia Coppola, and while greatly appreciative of movies in general, he admitted a penchant for thrillers.

“It’s a beautiful story that has not been told enough,” the ceo said of Fendi’s ties with Cinecittà and Hollywood. “We want to make this as open as possible, for a pleasant tour and to build memories, with a setting that is lively and not dusty.”

Running from Friday until March 25, the exhibition will be open to the public and free of charge. Fendi has even built a movie theater, “Fendi Cinema,” guarded by two giant reproductions of the Oscar statuettes, with comfortable red velvet chairs and vintage-looking lights, where it will project a different film every evening — also open to the public, via online booking.

The list of movies ranges from “Marie Antoinette” by Sofia Coppola to “The Godfather III”  by Francis Ford Coppola or “The Legend of the Pianist on the Ocean” by Giuseppe Tornatore. The movie “Making Dreams: Fendi and the Cinema” by Antonio Monfreda and Patrick Kinmonth, produced in 2013 by Fendi in collaboration with Cinecittà Studios, will also be shown to illustrate the history of the house within the movie industry. Beccari said proudly that, since the opening of the new headquarters and exhibition space in 2015, more than 100,000 visitors have flocked to the Palazzo, from young university students and families to tourists.

The exhibition also includes the “A Room With a View” area, where mirrors help the visitor to be projected onto a New York building, on the set of “Blue Jasmine” with Cate Blanchett, “The Devil Wears Prada” with Meryl Streep, or “The Age of Innocence” with Michelle Pfeiffer. The fur coat and large bag that Streep’s character would toss over her assistant’s computer, stand proudly next to the Baguettes bags worn by the “Sex and the City” cast — with the respective images scrolling on videos as a reference.

The Palazzo della Civiltà, often a set in movies by Roberto Rossellini, Michelangelo Antonioni and Fellini, serves as the background in “The Palazzo of Desires” studio for those visitors who wish to take selfies and appear in multiplied images behind the arched windows of a model of  the building, with clips of “Titus,” starring Jessica Lange, behind it.

A mirrored corridor leads to “Adventures in Tenenbaumland” and scenes with Gwyneth Paltrow in “The Royal Tenenbaums.”  After this, a lounge, dubbed “Every Princess Needs to Rest,” is peppered with pieces worn by the likes of  Sharon Stone in “Catwoman” or “Basic Instinct 2,” and Marisa Berenson in “I Am Love,” as well as trunks and suitcases used as props.

The furs and bags on display were plucked from Fendi’s archives at the Palazzo. WWD was offered the first, exclusive tour of the venue, which protects around 30,000 sketches by Karl Lagerfeld and the designer’s inspirational photos from 1966 onward, or special items such as a button shaped as a beetle dating back to 1984, and fabric samples. Around 3,000 pieces between ready-to-wear and furs are carefully stored away, as well as catalogues and press materials. In special black armoires, walls of Baguettes, Spy and Peekaboo bags would make Sarah Jessica Parker’s Carrie Bradshaw faint. There is a Sophia Loren suitcase sporting her initials SP, for Sophia Ponti, the surname of her late husband, Carlo Ponti; a Catherine Deneuve handbag with a hidden vanity case, and displays and chairs from Fendi’s first store in New York.

Asked to respond to a recent article in The New Yorker questioning how historical Fascist buildings, including the Palazzo della Civiltà, are protected and not torn down in Italy, Beccari, who masterminded the move of the headquarters, answered with a rhetorical question, shaking his head. “So why don’t we destroy the Maya pyramids or the Colosseum?” pointing to the murders perpetrated there. He also highlighted that Harvard University is studying the Palazzo della Civiltà and the recovery of  historical buildings “that are being filled with positive values. And that is something, isn’t it?”