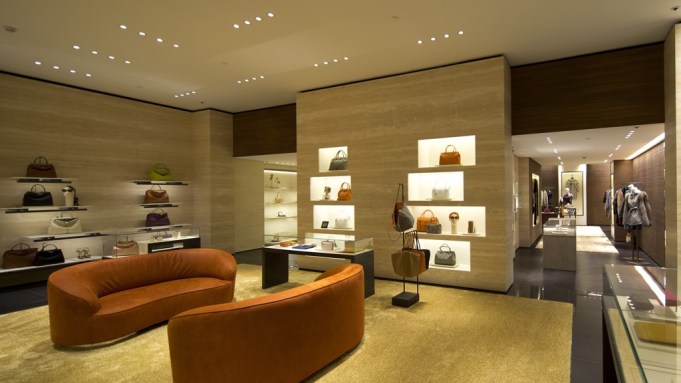 Thanks to Fendi, the latter will soon be part of the fashion mix in Brazil. The Roman fashion house, prized for its sables and inlaid minks, is to open a flagship on Wednesday in São Paulo’s Cidade Jardim, its first unit in South America’s largest country.

“There’s a growing appreciation for luxury there,” said chief executive officer Pietro Beccari, noting that Fendi welcomes many Brazilian clients at its boutique in Miami — and increasingly in Paris and Rome, too. “They travel a lot and they represent a very big potential for us. They buy all categories: our bags, ready-to-wear and furs. It’s about a Fendi silhouette.”

In Brazil, where the winter rarely goes below 50 degrees, selling fur coats may seem odd. Jean-Marc Gallot, managing director of Fendi Brazil, is aware of that, but believes the flagship couldn’t be launched with none of the trademarks of the brand. For the opening, almost 20 fur coats will hang on the racks. A mink coat costs 60,000 reals (about $28,000), whereas a coat made of cashmere with only short sleeves covered with sable costs 15,200 reals (just over $7,000).

Beccari said showcasing Fendi’s calling card — its savoir-faire and creativity in fur — is key, and he expects Brazilian clients to be appreciative of its craftsmanship.

The 3,800-square-foot unit will showcase Fendi’s complete women’s offering in a boutique design echoing its Rome palazzo with Navona travertine walls and lava stone floors. One wall of the store exalts its Selleria leather goods, with their hand-stitched details. The shopping complex is open seven days a week until 10 p.m.

The Brazilian population’s penchant for color and fantasy, and happy disposition, are also echoed “in the Fendi DNA,” Beccari added.

Enter Silvia Fendi, creative director of accessories and men’s wear: She lived in Brazil in the Eighties, between Rio de Janeiro and Buzios.

“It definitely had an important influence on my aesthetics, taste and vision as a designer,” she said, lauding the nation’s natural beauty and striking architecture by the likes of Oscar Niemeyer and Roberto Burle Marx. “I also appreciate the relaxed taste and attitude in Brazil that is not bourgeois and creatively informal, very similar to that of Rome.”

Fendi’s passion for the country extends to the design of her home in Rome, where she re-created a “Brazilian atmosphere,” prizing open spaces and large windows with views onto tropical gardens.

A trip to Rio last Christmas inspired Fendi’s designs for the fall collection, specifically the tropical birds she discovered at a friend’s home.

“You can see this influence in the furry creatures that decorate the bags, and the furry Baguettes,” she said.

In tandem with the Brazil boutique, Fendi plans to extend last year’s celebration of the Baguette’s 15th birthday with a month-long “Baguettemania” exhibition, open to the public. Among the styles on display will be one-of-a-kind Fendi bags made in collaboration with Brazilian artists Leda Catunda, Nelson Leirner, Nina Pandolfo, Rodolpho Parigi and Isay Weinfeld.

During the store’s opening party tonight, the bags will be sold via silent auction, with proceeds benefiting the charity Verde Escola, which promotes environmental awareness.

In the boutique, Fendi plans to sell limited-edition Baguettes, each made of dyed shearling color-blocked to evoke the Brazilian flag, along with a limited-edition Brazil scarf with a butterfly motif.

Fendi has been present in Brazil via wholesale clients since the Nineties, but it will now concentrate on distribution through the flagship, where it is able to offer elite personal service and showcase its produce range.

“The mall is very high luxury: You breathe luxury when you enter,” he said.

The executive didn’t rule out further expansion in Brazil, but said the immediate focus would be to cultivate the business in São Paulo.

Fendi is also present in Venezuela, Paraguay and Argentina via multibrand stores and franchise partners.