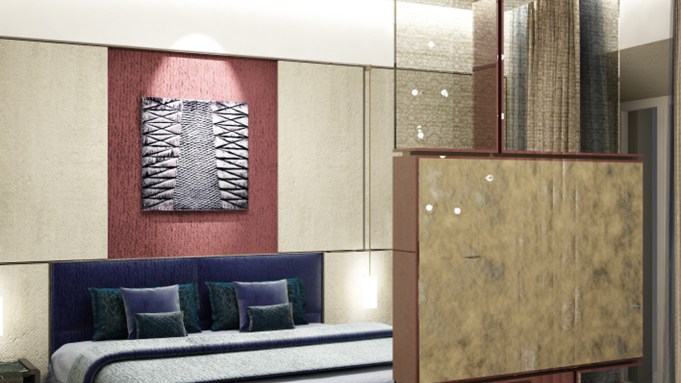 Another Fendi landmark will be unveiled in Rome next month. The newly refurbished Palazzo Fendi will reopen as an international destination, as it will comprise the company’s first boutique hotel, the Fendi Private Suites, and Palazzo Privé, an apartment designed by Dimore Studio, as well as a Zuma restaurant.

“The venue reflects Fendi’s aesthetic interpretation of its lifestyle in terms of design and is a symbol of the brand,” chairman and chief executive officer Pietro Beccari told WWD. “There is no other place where you can so easily understand our very precise, very personal vision of luxury. Once people come and see this for themselves, their entire idea of Fendi will change.”

Beccari said that this is “a vehicle that is not only commercial but is meant to transmit the sense of our creativity. Customers will be able to go beyond the product.”

The five-story, 17th-century building houses the brand’s largest store in the world, covering almost 10,800 square feet, and is an evolution of Fendi’s Paris and Milan flagships by architect Gwenael Nicolas, with a new area dedicated to Fendi’s in-house fur atelier, for special made-to-order, precious pieces, with eight artisans at work.

“This is the first time that a company gives up so many precious square meters to an atelier, which is not purely decorative or demonstrative — it’s a real customer experience and the artisans will be creating the more sophisticated and difficult furs. It’s a real production atelier,” explained Beccari.

The store will have a soft opening on Dec. 5. A bigger event is planned for next year. The flagship, with a staircase in red marble at the entrance, will be enriched with art pieces and sculptures.

The Fendi Private Suites will feature dedicated Fendi Casa designs. “Fendi Casa is about the love for design , and it will be evident in this location,” noted the executive, adding that guest will be offered “a Roman stay à la Fendi.”

The concept is by architect Marco Costanzi, who also conceived Fendi’s new headquarters in Rome’s Palazzo della Civiltà Italiana and the company’s Milan showroom. At the Suites, guests will be offered iPads with maps and soundtracks and a diary with Fendi stamps. As a souvenir and a gift, Fendi will also offer the rooms’ key holders in Selleria in different colors. The Suites will cost between 700 and 1,600 euros, or $754 and $1,722 at current exchange, a night. The hotel will open on Dec. 12. Beccari said the hotel is not part of a global strategy for the time being. “For the moment, it is limited to Rome, but we’ll see how it goes,” he said.

Beccari said the Palazzo Privé, which covers 1,080 square feet, includes a kitchenette and allows users to “have some friends over for a meal or for drinks in the heart of the city. It’s an experience money can’t buy.”

Fendi has been raising the bar in terms of quality and luxury, but Beccari said this is a direction set in motion years ago. “We’ve steered a straight course. The price is not an issue for our customers, exotics for example are increasingly more important, but at the same time there is a fun side, with our bag bugs, for example.”

The Japanese award-winning restaurant Zuma, cofounded by Rainer Becker, will be placed on the top floor and roof bar, and is due to open in February.

The company has occupied Palazzo Fendi, which is on Largo Carlo Goldoni, strategically located in front of luxury shopping street via Condotti and the Spanish Steps, since 2004 for retail and office purposes. The building was originally one of the residences of the Boncompagni-Ludovisi family, one of Rome’s most ancient aristocratic lines that boasts Pope Gregory XIII among its ancestors.