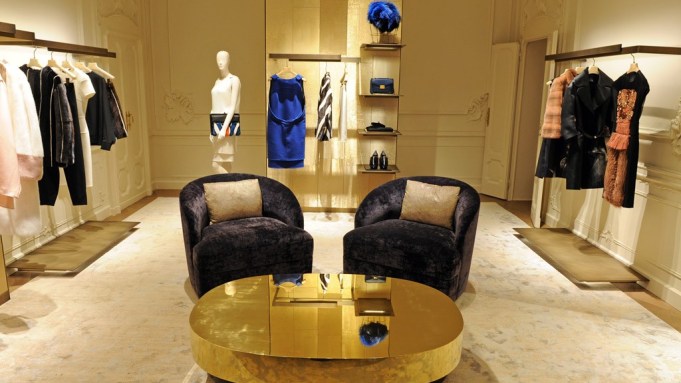 MILAN — Fendi is leaving its mark on Milan.

The luxury company will unveil its new flagship here on Thursday, the day of its show, and stage an exhibition titled “Making Dreams: Fendi and the Cinema” to mark its enduring relationship with Cinecittà and Hollywood.

“It’s a cultural moment in Milan, we are happy to lend a hand to fashion week, as it is important that it affirms itself in the world, we want to contribute to making it more interesting and attractive,” said Pietro Beccari, president and chief executive officer of Fendi.

The affable executive underscored the ongoing relevance of Milan. “It’s strong for both local and tourist shopping, and Via Montenapoleone is one of the city’s attractions, in the top five or six destinations globally, and we are especially pleased of this move in such a privileged position.”

Relocated from Via Sant’Andrea onto the prestigious Via Montenapoleone, the boutique is housed in the 16th-century Casa Carcassola-Grandi, with a neoclassical-style facade. Covering two floors and about 5,400 square feet, standout materials inspired by the brand’s Roman roots include travertine, leather, bronze and stone. The ground floor features a dark stone pavement with intense blue highlights, while a light wooden parquet is on the first floor. The opening comes on the heels of the new Avenue Montaigne store in Paris in July; both stores were designed by Tokyo-based French architect Gwenael Nicolas.

“The year 2013 was one of energy and activity, we are very satisfied,” said Beccari, who spoke of strong investments in Europe and “in the heart of luxury,” Italy and France, with plans to revamp London’s flagship next. While declining to provide a detailed figure, Beccari said Europe “represents an important portion of our sales.”

As part of the strategy to increasingly link Fendi with the world of design, in Milan unique art works and design pieces include an installation created by the Turin-based Italian artists Nucleo, featuring amber resin pixels, which covers a column at the entrance and is reminiscent of Rome’s cobblestones. In front of the column, there is a video commissioned from French artist Patrick Jean with a water scenario splitting into an infinite number of pixels, and then it slowly morphs into images of Rome during the Dolce Vita. Carpets are by American artist Haynes Robinson.

“The store has its own Milanese personality, it’s an antique palazzo and you step from one salon onto the next,” said Beccari. “In all locations, we place the history of the city at the forefront, and cultural safeguarding is an important part of our projects.”

On the first floor, thematic rooms range from the elegant fur salon, the Selleria and Made-to-Order room, a room dedicated to the brand’s ready-to-wear collection and the Baguette Wall, which comprises around 40,000 bronze spikes.

The fur room features black Japanese lacquered walls with gold and bronze highlights. Beccari has been highlighting the brand’s history with furs. “Fendi is the only brand that has its own internal atelier,” he said proudly. “More than 60 percent is produced in-house; it’s our jewel in the crown, with our 50 years of experience. It takes 10 years to shape new artisans, and we also offer made-to-order furs.”

Armchairs by Giò Ponti, a painting by the Italian painter Agostino Bonalumi and a wall lamp by FontanaArte define the exclusive atmosphere of the VIP room.

Karl Lagerfeld photographs of Roman fountains for “The Glory of Water” project embellish some of the rooms.

Fendi has 200 stores in 55 countries, but the strategy is rather to improve existing units and their locations instead of rolling out additional venues. There are also plans to relocate the Hong Kong and Tokyo flagships.

In addition to the exhibition, Fendi pays tribute to the movies through a special project linked to the award-winning 1974 film “Gruppo di famiglia in un interno” by Luchino Visconti, supporting the restoration of the original negative of the film and its digital HD transposition.

There is also a special documentary entitled “Conversation Piece” by movie director Ferdinando Cito Filomarino, as well as a book on the film curated and written by Quirino Conti, edited by Rizzoli. In collaboration with famed costume designer Piero Tosi, Fendi created fur coats worn by the actress Silvana Mangano in the movie.

“A brand is also about its history, you buy the legend of the product,” said Beccari.

The exhibit is curated by Patrick Kinmonth and Antonio Monfreda, developing the analogies between making movies and making clothes. It is set in the Manzoni cinema, designed by Mario Cavallé in 1947, closed in 2006 and reopened for the occasion.

The exhibition is imagined as a funfair, and the curators treated the venue in a “plastic” way, dividing it into seven themes each with its own separate architectural area and special designs and materials. The different areas define a multisensory path. In the first, “Snowdon and Fendi,” the images of the five sisters turn into a video animation. The second area is dedicated to Mangano, where images from the restored “Gruppo di famiglia in un interno” are projected, with costumes featured in the film. The third area, “Fendi Stars,” is a flower-shaped pavilion filled with video screens projecting images from several movies for which Fendi created costumes and accessories, which are displayed in the air like floating elements. Scenes were selected from films such as Martin Scorsese’s “The Age of Innocence,” Alan Parker’s “Evita,” Wes Anderson’s “The Royal Tenenbaums” and Luca Guadagnino’s “I Am Love.” The fourth area is entitled “Amphitheatre.” “Mapping Fendi” is the following area, reached through a walkway. The sixth space is dedicated to “Conversation Piece,” the documentary by Cito Filomarino. In the last, more intimate area, replicating a garden at night, visitors can also view the fully restored film by Visconti.

The exhibition will run until Oct. 6.

The company is not only looking back to its history but also to the future, launching this week a new interactive platform called Fendi Life. In addition to live-streaming its fashion show, Fendi will launch its Twitter and Instagram accounts. The “Social Wall” will provide interactive interviews with Lagerfeld, Silvia Venturini Fendi and Beccari.