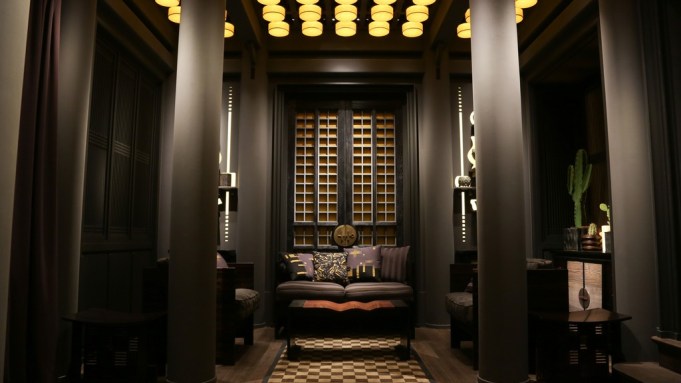 PARIS — Fendi’s rapid growth in China has inspired one of the most transporting temporary spaces in Paris.

The pavilion — designed to highlight a precious collection of enamel vessels from the Yuan, Ming and Qing dynasties, and the made-to-order capabilities of the Roman fashion house — is the work of cult interiors maven François-Joseph Graf.

“When the light is dim, you focus on everything,” Graf said, seated on a custom Fendi sofa priced at 45,000 euros, or $59,040, next to Fendi chairman and chief executive officer Pietro Beccari. Graf picked up a cushion to point out the metallic threads, made of real gold, woven into the design.

The Fendi showcase at Les Arts Décoratifs is part of AD Interieurs 2014, an exhibition devoted to elite interior design organized by the French edition of Architectural Digest and with Fendi as a main sponsor.

Thirteen decorators participated, including Chahan Minassian, Vincent Darré and Noé Duchaufour-Lawrance, with each designing a room inspired by decorative objects from the museum’s collection that have never been displayed.

“Everything is design-centric at Fendi,” Beccari said, elaborating on the Italian brand’s ongoing collaborations in industrial design and interiors. “A luxury brand needs depth, variety and several touch points with the client.”

Fendi has produced home furnishings with Club House Italia SpA since 1987, a partnership that yields wholesale revenues estimated in excess of 80 million euros, or $105.1 million at current exchange rates.

Beccari said the AD project allows the brand to show off custom designs, an emerging segment that reflects the hyper-luxury trend in fashion.

“It enables us to enter the homes of people, becoming part of the lifestyle,” Beccari explained. “It speaks to a certain clientele.”

Touring the hushed suite of rooms, Beccari pointed to brand icons Graf incorporated: some obvious, as in double-F logos carved into the fretwork on armchairs; some familiar only to fashion aficionados, such as geometric prints derived from furs designed in the Sixties by Karl Lagerfeld, its ready-to-wear and fur designer.