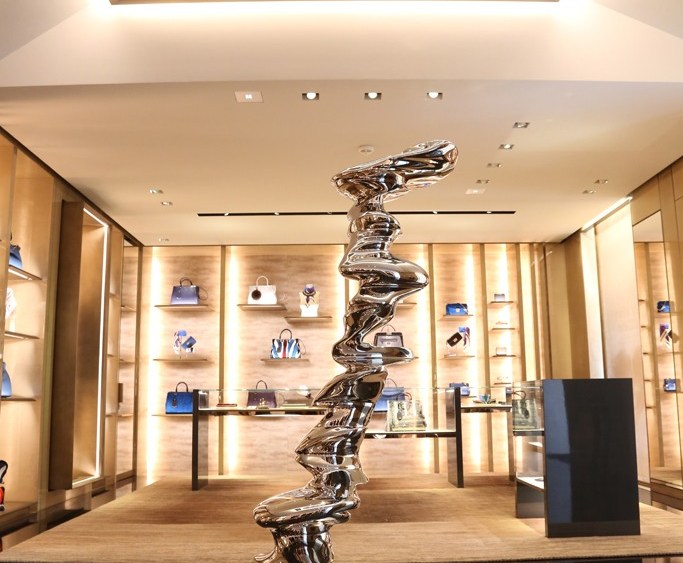 So declared Pietro Beccari, chief executive officer of Fendi, as he led a tour of the brand’s new flagship at 51 Avenue Montaigne here, referring to the striped mink coats and bags given pride of place at the entrance, and the fur salon visible upstairs through a glass porthole above.

The 6,500-square-foot unit, slated to open to the public on Thursday, exemplifies how Beccari is putting iconic products — headlined by fur and leather goods — at the center of Fendi’s development.

From the moment shoppers set foot on a Haynes Robinson rug that took eight months to hand-weave, they encounter a range of luxurious materials and furnishings, many with an Italian accent.

Gleaming black marble floors lead them through a series of accessories salons with curved walls in travertine — “like the buildings in Rome,” Beccari said as he caressed the pale stone — or glossy lacquer in a deep, captivating blue.

A grand staircase coils around a monumental, funnel-shaped sculpture composed of multicolored Murano glass shards — 28,000 of them to be exact — leading up to a shoe salon, a watch niche and an expansive room housing the fur and ready-to-wear collections.

“It’s a very coherent theater for our great actors,” said Beccari, referring to star handbags like the Peekaboo and the Baguette, which is exalted near the staircase with a mesmerizing display, showing some of them embedded in a wall sprouting 127,000 metallic rods. They’re a wink to the needles used on the “fur tablets” where artisans experiment with intricately spliced, multispecies furs.

One of Fendi’s largest stores after its flagship palazzo in Rome, the Paris unit is “almost double” the size of its previous location at 22 Avenue Montaigne, Beccari said. “Space is also a luxury,” he said, flashing a big smile.

Fendi plans to open another expanded unit, also reflecting the new store concept by Nicolas, on Via Montenapoleone during Milan Fashion Week in September. A London flagship is due in 2014.

Focusing on women’s product categories, the Paris boutique boasts a room dedicated to handmade Selleria bags and a made-to-order service for bags, with prices running into the five figures. A woven technique first employed on Fendi furs in the Fifties allows customers to add their names or initials on certain bags.

Other striking features in the store include a table, screen and treelike sculptures by Maria Pergay, as well as pieces by Giò Ponti, Gabriella Crespi and Hervé Van Der Straeten. As reported, Fendi is to feature industrial design stars in its boutiques and link their commissions to the licensed Fendi Casa home range,with reeditions of Pergay designs the first of what are being dubbed Fendi Casa Icons.

Connections to its hometown are also being underlined. Beccari added the word Roma under the Fendi logo and gave its trademark yellow packaging a weathered patina, like timeworn buildings in the Eternal City.

Fendi is feting the Paris boutique in grand style, unveiling a traveling exhibition of photos of Roman fountains by Karl Lagerfeld, its designer of furs and rtw since 1965.

The exhibit is to remain in five domelike structures along the Seine for 10 days before moving on to other cities, including some in China.

For the fountain photos, Lagerfeld employed two early photographic processes — daguerreotype and platinotype, which involves platinum and has been rarely used over the past century due to the exorbitant cost. Platinum printing offers unrivaled durability and a rich tonal range, from deep blacks through brownish and midgray tones.

“The Glory of Water” project dovetails from Fendi’s four-year commitment to restore several crumbling fountains in Rome, including the Trevi and the Quattro Fontane.

In the foreword of the Steidl book, Lagerfeld calls de Bascher “the French dandy par excellence” and laments that “his short life did not allow him to ever make another film. He knew he would die young and consequently acted in a totally destructive way….The film has an artful mood of still-modern surrealism.”

In other Fendi news, the fashion house has named Gaetano Sciuto president of its Americas division, effective Sept. 1.

Sciuto is currently Fendi’s licenses and accessories director based in Lugano, Switzerland. Since joining Fendi in 2008, he spearheaded the brand’s development of areas such as timepieces, home, fragrance, eyewear, textiles and children’s wear.

Prior to Fendi, Sciuto worked for companies such as Sebastian International, Lotto Sport and Sola International, which was acquired by Carl Zeiss in 2005. He also served as managing director of Carl Zeiss Vision’s Sunlens division.

At Fendi Americas, he succeeds Stacy Van Praagh, who left the company in April. Sciuto will relocate to New York and report to retail and wholesale managing director Jean-Marc Gallot.

Fendi is expected to appoint a new licenses and accessories director in the next month.