The show in Rome and the exhibition are to mark the luxury fur house's 90th anniversary. 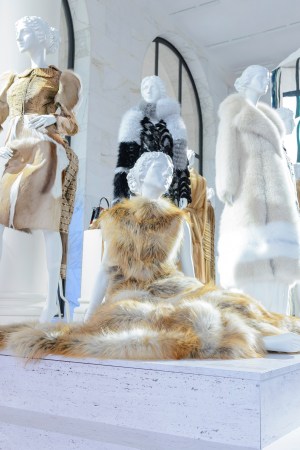 ROME — “For everything to go well, one must always change everything; it stimulates creativity.”

Could Fendi chairman and chief executive officer Pietro Beccari’s mantra be the recipe for a 90-year milestone? To be sure, the Rome-based company is marking nine decades in business on a high note, as it continues to grow globally. Fendi celebrates the anniversary today with a Haute Fourrure show of Karl Lagerfeld’s designs at the Trevi Fountain, a first for the Baroque monument, and an exhibition at the company’s new headquarters at the stately Palazzo della Civiltà Italiana.

To stage a show at the Trevi Fountain, whose restoration Fendi supported, with a catwalk placed on the water and the closure of four neighboring streets on a busy Roman summer day sounds like a feat in itself, but Beccari is undaunted. “I refuse to look at projects that are not ambitious enough. We must think big. Surprise me,” he said ahead of the show on Wednesday.

His enthusiasm reflects Bernard Arnault’s ambitions for the brand, which is understood to be among the fastest-growing in the LVMH Moët Hennessy Louis Vuitton stable.

“We’ve had a beautiful start of the year. Fendi is now a brand with visibility, with people who love it and are looking at it. The desirability of today [leads to] tomorrow’s sales,” said Beccari, who underscored how the target customer has grown more sophisticated — and younger, too.

Beccari joined the subsidiary of LVMH in 2012, succeeding Michael Burke. He revealed how his initial strategy for Fendi in 2012 included several ideas that will be visible at today’s show, such as further linking the brand with Rome, a deeper focus on the fur division and even the show at the Trevi Fountain.

“The runway looks like frozen water, and the collection is dreamy, which is fitting, as Trevi is a dream come true. Nobody could have imagined it would actually happen,” said Silvia Venturini Fendi. Also fittingly, the show is dubbed “Legend and Fairy Tales.”

“There are so many stories that have yet to be told. They are all different facets of the same diamond. Fendi has a beautiful historical patrimony. We should leverage our know-how to make things happen,” said Beccari, who shares Lagerfeld’s and Venturini Fendi’s dislike of retrospectives and anniversaries.

“We wanted to focus on a few cornerstone items and not stage a self-celebratory exhibition,” said Venturini Fendi of the “Fendi Roma: Artisans of Dreams” exhibit. “It’s concentrated on the concepts, the creativity and the essence of the brand, not the past and the archives. Archives are beautiful when they are used. I like to think that we are projected toward the future. We are 90 years old, but the wind is in our sails.”

The exhibition was conceived to celebrate the brand’s craftsmanship and opens with a one-of-a-kind Fendi fur, a multicolor mink-and-fox vest with inlay work in yellow and black. The video “Fendi: Hands Make Beauty” highlights the most significant moments and evolution of the brand’s history. The seating in the small cinema? An inlaid, tie-dyed mink bench.

The third area, called “Labyrinth,” displays a maze of fur tablets, the wood panels on which Fendi artisans experiment with furs after receiving Lagerfeld’s sketches. The tablets are placed on a 3-D brass labyrinthine structure. It’s a visual feast, and a standout includes a tablet in shearling that reproduces Rome’s skyline.

The journey continues with “Obsession,” a psychedelic furry jungle made of more than 300 Bag Bugs — the furry monsters created by Venturini Fendi — reflected in a room mirrored ceiling to floor. A fourth room emphasizes Fendi’s craftsmanship, showing an artisan at work, carefully cutting the furs surrounded by Lagerfeld’s countless sketches. The pink short cape in mink and feathers from the fall 2015 Haute Fourrure collection is shown in each phase of its creation. To fuel the experience, a long corridor allows visitors to touch a furry punching ball or car-wash-like strips of fur hanging from the ceiling.

The “Essentials” room displays a selection of Baguette and Peekaboo bags and furs, from the Astuccio and Eskimo furs of the Seventies to the Intarsi of the Aughts or the toffee fur coat worn by Gwyneth Paltrow in “The Royal Tenenbaums.”

The fall 2016 Haute Fourrure show will be projected in the “Dream” room, which reproduces the Trevi Fountain. The exhibit, which runs from Saturday to Oct. 29, ends with the “Library” and the Fendi Roma book, a 272-page tome that includes more than 300 illustrations, and which is being published by Assouline.

Venturini Fendi said the exhibit reminded her of a previous one that marked Lagerfeld’s 20 years at the company, in 1985, which was held at the Galleria Nazionale d’Arte Moderna in Rome. “It was about the future and how Karl saw it, imagining video conferences when portable phones did not even exist. It was the first time fashion entered a museum, and it was a scandal with political implications, but it was such a success, the exhibit was extended,” she recalled. “It reminds me of this show. Both are essential, with a few strong, meaningful concepts.”

The company staged its first Haute Fourrure show in Paris during couture week last year, in July. Venturini Fendi said the company will probably continue to show in the French capital going forward.

The company has evolved from a small fur atelier opened in 1926 by Edoardo and Adele Fendi on Rome’s Via del Plebiscito. Today, Fendi continues to have a fur atelier in its store.

A boutique opened in Rome’s Via Piave in 1932, with a new leather-goods and fur atelier that unveiled a full-range collection of Selleria bags, characterized by handmade crafting techniques inherited from the Roman master saddlers that continues to be relevant today. In 1933, Fendi launched the Pergamena, a richly textured material that marks the origin of the yellow color, a recurring element.

Between the end of the Forties through the Fifties, the five daughters of Edoardo and Adele — Paola, Anna, Franca, Alda and Carla — began working for the family business. In 1964, the sisters opened a boutique with a fur atelier on Via Borgognona, where it stood for more than 40 years. In 1965, they started one of the most fruitful and long-lasting collaborations in fashion with Lagerfeld, who also created the “double F” logo, which stands for “Fun Furs.” These were dyed in rich, untraditional shades of purple and green or orange, and mixed hides, using lesser-known pelts such as ferret and squirrel and developing innovative manufacturing techniques for furs. “[Lagerfeld] is the sixth Fendi child,” Carla Fendi has said. “Our pasts and our future are intertwined.”

In 1969, the first ready-to-wear fur collection was shown at the Sala Bianca, inside Florence’s historic Palazzo Pitti. At the end of the Sixties, Fendi started working with movie directors such as Luchino Visconti, Federico Fellini, Franco Zeffirelli and Mauro Bolognini and began dressing the likes of Silvana Mangano, Diana Ross, Sophia Loren, Jacqueline Kennedy Onassis, Princess Soraya, Liza Minnelli and Monica Vitti. Fendi created the furs for Silvana Mangano in the movie “Gruppo di Famiglia in un Interno,” by Visconti.

In 1977, Fendi presented its first ready-to-wear collection in a groundbreaking way, through the short movie “Histoire d’Eau,” which was directed by Jacques de Bascher. Silvia Venturini Fendi, the daughter of Anna Fendi, joined the company in 1992, working with Lagerfeld. In 1994, she was given sole responsibility for accessories. In 1997, she launched the Baguette bag.

The success of the company led to one of the most dramatic bidding wars in fashion history, in 1999. Texas Pacific Group and Gucci/Pinault-Printemps-Redoute (now Kering) began bidding feverishly against one another to acquire the brand. Eventually, Prada’s Patrizio Bertelli and Arnault joined forces to buy a 51 percent stake in Fendi from the five sisters. Sources at the time estimated the deal placed a $950 million valuation on the brand — 33 times Fendi’s bottom line, in an industry where 25 was considered a very high multiple. LVMH in 2001 became Fendi’s majority shareholder, buying out Prada’s 25.5 percent stake.

“We thought it was for the good of the company,” said Venturini Fendi. “Here was a group of intelligent women who had a clear vision — first gradually selling shares to face global challenges and in light of an expanding family.” Venturini Fendi said the web of family members, 11 in her generation and 30 in the next, made succession plans “complicated.” “It was a florid company, that was our strength. We didn’t have to sell. You must really love your company when you differentiate its needs from those of the family.”

Her own attraction to the company was “natural,” she said. “I was everywhere from early on, I was interested, I wanted to be close to my mother,” recounting how she started making Christmas packages and helped to dress models. Her first design appointment came with Fendissime, a line that closed in 2001.

The designer underscored that Fendi has always been about “taking risks and breaking the rules,” crediting her mother and her aunts with a “pioneering spirit. They were all women, when it was not so easy to be entrepreneurs. They had to work hard to elbow their way in business, and they worked outside fixed schemes.”

Venturini Fendi said that although the company is big, it “continues to have a family spirit. See how Pietro doesn’t have ceo manners? He doesn’t meet you behind a desk, he works with his team, and we have a constant dialogue. I love working with him, and he’s doing an excellent job. We are happy. It’s a joyful moment, and Karl is happy, full of new projects.”

Asked about the success of Fendi’s accessories — the Baguette and the Peekaboo, in particular — the designer responded that it all “happened in a natural way, with good products at the right time, without looking at what others were doing. They were my solitary, individual projects that filled a gap.”

She said the Baguette was released just as minimalism was booming and designer bags were merely functional — such as the “black nylon bag.” She described the Peekaboo as “the counter-Baguette. There were so many bags, even those that had no experience in leather goods understood the potential of bags. I think there are a lot of really ugly bags out there. The Peekaboo goes back to the classic bag, but there are elements of surprise in the embellishments.”

To mark the anniversary, Fendi is launching the Peekaboo 90 years, a one-of-a-kind bag entirely made by hand in a limited edition of only 60 pieces that will be available exclusively at the Palazzo Fendi boutique in Rome starting this month. Fendi first introduced the Peekaboo in 2009.