Italian brand held its first fashion show in Moscow on Thursday and also celebrated the launch of its new fragrance, Signorina. 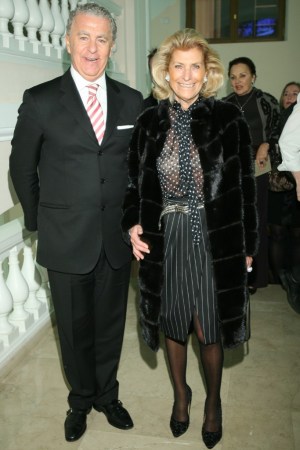 MOSCOW — Salvatore Ferragamo held its first fashion show here on Thursday with models striding down a hall in the 18th-century Pashkov House, opposite the Kremlin.

This story first appeared in the October 21, 2011 issue of WWD. Subscribe Today.

Hollywood and local celebrities saw Ferragamo present its spring 2012 runway collection with design director Massimiliano Giornetti making an appearance at the end of the show.

“It is very impressive,” said Giovanna Gentile Ferragamo, vice president of the company and the daughter of Salvatore Ferragamo, of the venue decorated with beige chairs and mirrors. “It has a very nice flavor to it, of the good times in fashion when shows were in ateliers, [it’s] more intimate.”

“We wanted something traditional, like a home, a villa. This palace has been used for official functions but never for fashion shows and it has a great view of the Kremlin,” said Ferragamo chief executive officer Michele Norsa, “It’s an institution.”

Ferragamo decided on Moscow because it is almost 10 years since it opened its first store in Russia, said Norsa. Today, the company has seven stores in the country, five in Moscow and two in Saint Petersburg, as well as another 15 official selling outlets east of Moscow as far as Vladivostok, he said.

“Moscow is very important but it is often neglected by the fashion world,” said Norsa. “Russian buyers are strong in Europe — in London, Milan, Paris. This is a good way to be visible to them.”

In the future, Ferragamo aims to expand its store in the GUM department store, so that it can show all the brand’s wares.

Hollywood actresses Camilla Belle, Amber Heard and Carmen Chaplin were among the VIP audience for the show.

“I’ve always been a fan of Ferragamo, I went to the museum in Florence. It’s a chic Italian brand and I couldn’t turn down the chance to be here and support it. It is a lovely event to come to,” said Belle.

“I’m a black-and-white type of girl and I love their new take on feminine sophistication,” said Heard, who, like Belle, had flown in from Los Angeles the day before.

The night was also part of the launch of the company’s new fragrance, Signorina, with an after party held at Moscow’s White Rabbit restaurant. The scent is aimed at women between 25 and 35 years old and at the American market, said Luciano Bertinelli, the ceo of Ferragamo Parfums.

“The smell is fruity floral with a top note of jasmine,” he said.