Italian luxury brand today unveils its newly renovated New York flagship which, at 20,000 square feet, is its largest store in the world. 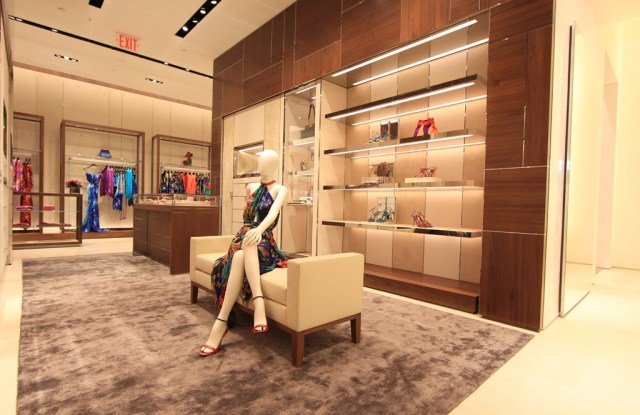 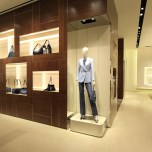 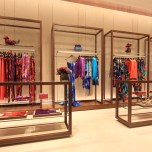 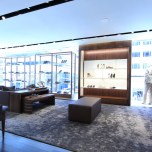 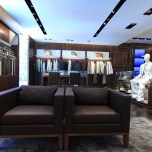 NEW YORK — Ferragamo today unveils its newly renovated Fifth Avenue flagship which, at 20,000 square feet, is its largest store in the world.

This story first appeared in the April 6, 2012 issue of WWD. Subscribe Today.

The store at 663 Fifth Avenue and 53rd Street, is brighter and more open, with 22-foot ceilings on the ground floor and a walnut, steel and glass staircase that connects the first and second floors. Italian stone floors, Venetian plaster walls, wood veneers and glass etched with the house’s grosgrain pattern give the store a rich feel. Walls covered in walnut and divided into grid patterns by strips of stainless steel — the company calls them Mondrian walls — showcase products on recessed shelves. A new area was carved out for fine jewelry, which launched in the fall and features silver and gold designs with diamonds, including silk cord bracelets with silver charms and gold pendants encrusted with diamonds, priced from $250 to $15,000.

Ready-to-wear, including runway designs, are showcased on the left side of the store. In the flagship, rtw represents 15 percent of total sales, Ferragamo president Vincent Ottomanelli said. “Rtw drives all of our categories,” he added. “New York is a significant driver of our rtw.”

A Salvatore Ferragamo Creations room has antique mirror-covered walls and is filled with photos of the founder and designer with celebrity clients such as Marilyn Monroe and Rudolph Valentino. The room will showcase the 10 to 15 limited edition collections that are produced from Ferragamo’s archives each year.

A large shoe salon replete with leather couches and chairs features everything from suede wedge espadrilles for $395 to T-strap sandals with embroidered silver chains, $795. Handbags include a red suede drawstring duffle with lizard trim, $2,200. The soft W handbag is $1,850, a pebbled leather tote, $1,800 and a chain-covered evening clutch, $2,250.

The second floor is devoted to men’s wear. It’s a darker variation on the first level, with dark stained oak floors and brown corduroy seating. Men’s shoes are displayed in fixtures along windows facing onto Fifth Avenue. Ottomanelli said men’s and women’s shoes and handbags are the company’s biggest categories. The company’s U.S. business breaks down to 55 percent women’s and 45 percent men’s.

Ottomanelli said the flagship’s store design will be used for future renovations and new openings. “We want to replicate this look in our stores,” he said. “After we renovate a store we’ve been seeing nice double-digit increases.”

Ottomanelli said renovation work will begin next week at the Vancouver store. Ferragamo is unveiling a new store at the Fashion Valley Mall in San Diego and there are plans to renovate the San Francisco unit. Last year, stores in Las Vegas at Caesar’s Palace and Atlanta at the Lenox Square Mall were renovated. Ferragamo plans to double the size of its existing Chicago flagship.

With 37 units in the U.S., Ottomanelli said the company’s strategy is to renovate and expand existing stores while selectively adding new ones. In Florida, where Ferragamo operates five stores, the company is eyeing Miami’s Design District and is considering an additional store in Houston. It also is eyeing Toronto and is looking at several locations on Madison Avenue in Manhattan. “We believe it would have to be very special and different,” Ottomanelli said. “We would like to create a little jewel box.”