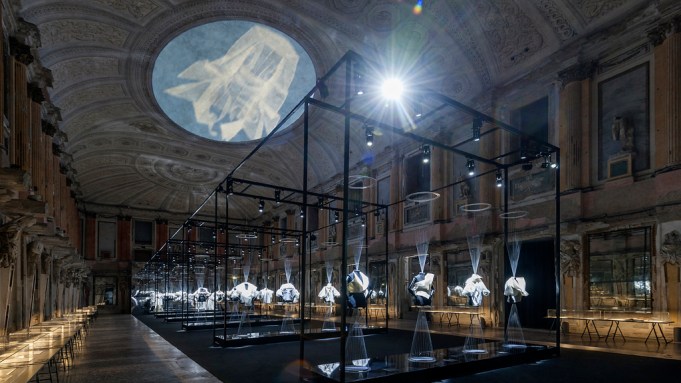 Organized by the Milan-based Gianfranco Ferré Foundation, the exhibit runs from March 10 to April 1 and showcases 27 of the key white shirts designed by Ferré from 1982 to 2006. The exhibit was first unveiled at the Textile Museum in Prato, Tuscany, in February 2014.

“This is the exhibit’s second life,” said Rita Airaghi, Ferré’s cousin and director of the foundation. “In Prato, it was seen in an industrial space, here, the genius loci [in Latin, the atmosphere of the place] and its charm evoke poetry, fantasy and dreams. Fashion is imagination and also a dream, as well as scientific rigor, culture and research,” said Airaghi.

Domenico Piraina, director of the Royal Palace, underscored Ferré’s attention to geometric cuts and fabrics, and how the designer blended creativity and discipline. “This exhibit is not only on Ferré or his iconic shirts, but on his creative process and how he worked,” said Piraina.

Poplin, organza, silk and taffeta shirts are displayed on black mannequins suspended by thin metal cables (almost floating, strategically lit) and can be viewed from all angles. Drawings, photographs, advertising and editorial images and installations complete the experience.

Airaghi, who has actively continued to preserve the late designer’s aesthetic and cultural patrimony through the foundation, said there are plans for the exhibit to travel to the U.S., to Phoenix and “perhaps” Los Angeles and Chicago.