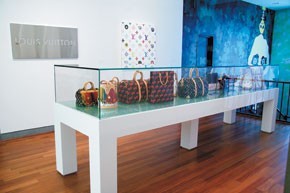 Make no mistake — Louis Vuitton is well-equipped for combat against counterfeiters.

Tonight, Vuitton is celebrating Takashi Murakami’s “© Murakami” exhibition with a “Brooklyn Ball” at the Brooklyn Museum featuring a special performance by Kanye West, the unveiling of a new camouflage print developed by Murakami and Marc Jacobs called Monogramouflage and a special installation designed to bring attention to one of the industry’s biggest travails — counterfeits.

But rather than simply hand out leaflets to alert guests about the importance of protecting original designs, the French luxury goods house will be taking a novel, somewhat intriguing route. Outside the museum, Vuitton is setting up 10 New York-style street vendors — not to sell fakes, but rather authentic Louis Vuitton product and special Monogramouflage canvases that Murakami has created specifically for the exhibition.

While it may seem lighthearted on the surface, the presentation is meant to underscore just how serious Vuitton executives are taking the counterfeit trade, and how diligently they are working to stop copycats from getting their merchandise to consumers.

“We always thought that counterfeit requires zero tolerance for several reasons,” Yves Carcelle, chairman and chief executive officer of Louis Vuitton, told WWD in an exclusive interview. “It’s a gray economy that escapes all rules of normal labor and normal economic rules and taxations, so it’s a bad thing for every state in the world. Secondly, it’s bad for any kind of creativity, research and development, because if you don’t protect intellectual property, why should people dedicate time and energy to create?”

Carcelle will highlight the issue in a press conference with Brooklyn Museum director Arnold Lehman and New York City deputy mayor Ed Skyler prior to the gala’s cocktail hour tonight.

Vuitton is no newcomer in the fight against counterfeiters. This year also marks the centennial of its first court case. In 1908, the brand won a ruling from the Paris Appeal Court to halt the distribution of look-alike trunks.

The luxury brand now employs a 40-member team that focuses exclusively on protecting its trademarks, designs, models, copyrights and domain names. The team is based in Paris, with regional offices in New York, Tokyo, Hong Kong, Milan, Dubai, Buenos Aires and Guangzhuo, China.

Since 2003, the company has conducted over 30,000 raids against individuals or companies selling fake Vuitton merchandise. Last year alone, the firm directed more than 7,600 raids worldwide, often seizing the fake merchandise and even the manufacturing tools in order to prevent factories from returning to producing counterfeits. In addition, more than 24,000 legal proceedings were initiated on behalf of Vuitton last year, and over 750 Web sites selling fakes were forced to shut down.

“It’s an ongoing process,” Carcelle said. “If you ask people working against the drug trade, it’s a daily thing of controlling the borders, investigating the workshops and controlling the stores, or the tenants and landlords.”

Carcelle had much praise for the fight against counterfeits in the U.S., particularly lauding New York for its program of going after landlords of counterfeiters, which he said has significantly reduced the number of vendors around Canal Street. In the most recent case, New York City police officers raided a collection of buildings in Chinatown occupying a city block in late February, and seized more than $1 million in knockoff accessories and fragrances.

“The message we’re sending to counterfeiting operators and their landlords throughout the city is, whoever you are, wherever you are, we are going to shut you down,” Mayor Michael Bloomberg said at a press conference after the bust.

“Thanks to the law, if you are a landlord and you authorize your tenant to sell counterfeits, you can be liable if the tenants cannot pay the fine,” Carcelle said. “There is a self-regulation about this, which is good. Our commitment is to fight not only by ourselves but really also with our colleagues. It’s a joint effort for everyone in luxury and fashion and also pharmacy and automobile spare parts and so on.

“We think that by highlighting it in a happening way and not in a boring way, it will make everybody more aware,” he added.

The idea for the special installation at the Brooklyn Ball came up during a recent conversation Carcelle had with Lehman about intellectual property. The exhibit had ended its run at the Los Angeles Museum of Contemporary Art on Feb. 11, and Lehman was looking for ways to give the opening a particularly Gotham spin.

“We talked about what New York is famous or infamous for,” Lehman said. “When both residents and visitors think of purchases here, there is so much today on the street in so many parts of the city, it’s become almost in a way identifiable with New York. It’s also such a visual manifestation of the [counterfeit] issue that Vuitton thought that this was an interesting way to characterize the problem.”

Carcelle added, “The street vendors are not negative in themselves, they are part of the life of the city. When they sell counterfeit goods, however, it’s detrimental to the city itself.”

The executive admitted to a sense of surprise among Vuitton executives when the idea for the installation was first suggested.

“It was daring, but on the other hand, talking about a very serious matter — counterfeiting — through a process of a happening or installation is probably an original and unique way to attract attention,” Carcelle said. “It shows that we are all committed: the world of art represented by the artist, by the museum, the world of luxury and the city itself.”

The Murakami exhibit opens its doors to the public on Saturday. Just like the previous MOCA edition, it will feature a special 550-square-foot Vuitton boutique, located within the exhibit on the museum’s fifth floor. The store will offer multicolor monogram handbags and small leather goods, as well as 300 art canvas squares featuring the new Monogramouflage design, in coated canvas, denim and printed canvas. The first 50 of each edition will sell for $6,000, and the second batch for $10,000. Murakami also created three larger canvases, which will be auctioned at the gala tonight.

Sales from the Brooklyn Museum’s store and the street vendors on the night of the gala will benefit the Federal Enforcement Homeland Security Foundation.

The Monogramouflage collection featuring luggage, handbags, small leather goods, costume jewelry and ready-to-wear will launch at the museum on June 1 and will be available at select Vuitton stores worldwide starting June 15.

Murakami told WWD that the collection had its origins a year or so ago, when he swung by Jacobs’ SoHo studio. “Marc had a precise idea,” Murakami said, although Monogramouflage isn’t his first work in camouflage: In the past, he has produced prints featuring his iconic Mister DOB figure in a camouflage setting.

On Monday, Murakami stopped by Vuitton’s offices to sign each Monogramouflage canvas available at the museum. He said that offering such limited edition canvases that are more accessible than some of his pricier art was something he always aspired to and he no longer seems bothered that his multicolored designs for Vuitton have been knocked off. “People finally understand that this is the original,” he said.

According to Carcelle, Vuitton’s love affair with the arts and architecture dates back to its 19th-century origins when the leather goods house had close ties to Impressionist artists. More recently, it has worked on special in-store installations with the likes of Olafur Elíasson, James Turrell, Ugo Rondinone, Bob Wilson and Teresita Fernández.

“It’s educational because it puts millions of people in contact with artists that they probably never would have known,” Carcelle said.

But the Murakami product collaboration probably remains the most iconic, and has generated sales of Vuitton merchandise in the hundreds of millions of dollars worldwide. its appeal is ongoing. And the tie with Vuitton has become intrinsically linked to Murakami and his public recognition.

“We were expecting a big impact, but I don’t think anyone had imagined that nearly six years later, it would become one of the new eternal pillars of the vocabulary of Louis Vuitton,” Carcelle said.

As for Murakami himself, he could imagine more Vuitton collaborations with Jacobs down the road, especially when they come with Vuitton-hosted events like the one tonight.

“The Louis Vuitton people are the highest-level, most professional party people,” he said. “They are the top of the top. At the MOCA party, people didn’t want to sit down. It was so unique. It makes me think the Brooklyn party also will have a lot happening.”