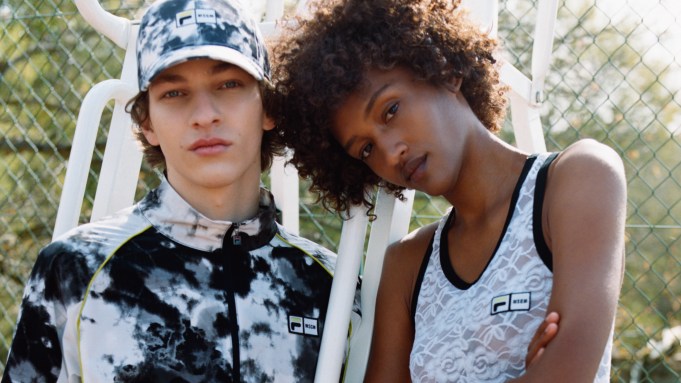 MILAN — Just in time for the second Grand Slam tournament of the year — the Roland Garros, to be held in Paris from May 24 to June 13 — Fila is unveiling a new collaboration developed with cool Milan-based contemporary brand MSGM.

“For me Fila means tennis, and working on this project I had the great privilege to get exclusive access to the brand’s incredible archives, which have been a huge source of inspiration,” said MSGM founder and creative director Massimo Giorgetti. “For this capsule, I revamped and refreshed some archival designs adding to them the signature MSGM colorful, fun and modern twist.”

In particular, Giorgetti explained that he started working on the collection by embracing a cinematic approach, imagining the atmosphere of Woody Allen’s “Match Point” movie — “one of my favorite films,” the designer said — combined with Luca Guadagnino’s “Call Me By Your Name.” “It’s like Woody Allen and Luca Guadagnino are meeting on the Roland Garros court,” Giorgetti added.

The capsule, which is focused on men’s and women’s tennis performance outfits, which will be worn in Paris next week by Fila’s athletes, including Karolina Pliskova, Sofia Kenin, Reilly Opelka and Diego Schwartzman, has been unveiled with a short movie that Fila and MSGM filmed in a villa outside Paris.

“I wanted to convey a romantic and sensual interpretation of the world of tennis and I took the chance for the first time to explore a French mood,” explained the designer, who worked with film director Oliver Hadlee Pearch and an entirely French team. “We portrayed a sort of love triangle on the tennis court.”

The collection includes halter neck tops, mini skirts, shorts, polo shirts and dresses, crafted from performance Lycra printed with MSGM’s tie-dye motifs, as well as with a revamped archival pattern of multicolor marbles. In addition, inspired by the sexy and audacious femininity of legendary Italian tennis player Lea Pericoli, who in the ’50s shook the traditional world of tennis by wearing hyper feminine outfits on the court, the designer introduced lace accents, sensual cutouts and ruffles.

“As I do with my MSGM collections, I wanted to create a sort of claim for this capsule,” said Giorgetti referring to the “You are my match point” wording embroidered or printed on garments and tennis accessories. “I think it’s a beautiful declaration of love.”

The MSGM x Fila Capsule, retailing from $95 for T-shirts to $235 for jackets, is available exclusively from today at fila.uk and at msgm.it, as well as selected Fila stores in China and Japan. Later this summer, the collection will be also on sale at fila.com.