A clutch of promising young designers is making news, driven by cutting-edge schooling and an adventurous approach to fashion.

By Paulina Szmydke and Laurent Folcher on November 20, 2013
View Slideshow 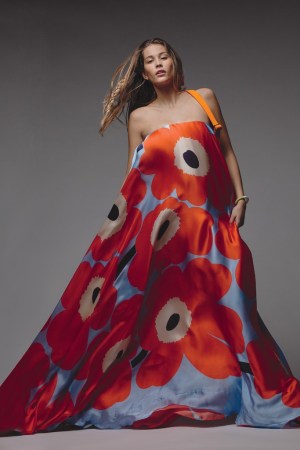 Not since Marimekko’s cheerful prints swept Jacqueline Kennedy off her feet in the Sixties has Finnish fashion had such a moment. Now, a clutch of promising young designers is making news, driven by cutting-edge schooling and an adventurous approach to fashion.

“For a long time, it seemed that it was just a couple of designers doing their own thing in relative isolation. But now it’s beginning to be more like an actual wave of labels, magazines, photographers and stylists,” said designer Saara Lepokorpi, suggesting that the groundswell of talent in Finland echoes what happened in Antwerp in the Eighties.

The prospects are certainly promising. The last two winners of the Hyères International Festival were Finns: Trio Siiri Raasakka, Tiia Siren and Elina Laitinen scooped the prestigious Grand Prix in 2012 while they were still students at Helsinki’s Aalto University (they’ve since disbanded), while Satu Maaranen, also an Aalto grad, secured it this year.

“In the last five years, the level of education has risen impressively,” said Maaranen, who was tapped by Marimekko in 2010, while still studying, to design the brand’s women’s wear and prints. “The most important lesson we were taught: Be as experimental as possible.”

According to industry insiders, the man in charge of this Finnish movement is Tuomas Laitinen, a designer who took over the reins at Aalto’s fashion department seven years ago. Under the direction of design department head Pirjo Hirvonen, Laitinen set up studios with top-notch equipment where students weave, knit and print their own fabrics, and trimmed the curriculum down to no more than two complete collections a year. He invites his industry contacts to the graduate shows and at times has helped facilitate stints at major fashion houses. “Students work as if they were designers already,” said Laitinen, who won the honorary Hyères prize himself in 2006.

Perhaps most impressive: Out of hundreds of applicants and after a long and laborious admissions process, only 12 students are accepted into Aalto’s fashion program each year. “[This] guarantees a very personal tutoring both with design work and technical aspects [such as] pattern-cutting and sewing techniques,” Laitinen said, adding that his students are eager to forge an aesthetic different from Nordic minimalism, one that’s “still clean, but very rich in textile, color and surface.”

Although Finland has no fashion week or fashion council, a new platform called Pre-Helsinki, founded in May 2012 to promote local designers internationally, is filling the gap. The group sets up temporary showrooms during fashion weeks abroad, arranges for young designers to meet with buyers and press and handles marketing for new labels. “These designers have the courage to start their own businesses, [they] understand the international markets, have the language skills and the international contacts. This is our moment,” said Pre-Helsinki’s director, Miia Koski, who cites Asia and the U.S. as the most important and fastest-growing markets for Finnish designers.

Even financing — still the biggest challenge — is easing up. While Finnish investors are typically more interested in technology ventures, more are discovering that fashion is serious business. Pre-Helsinki hosts annual meetings to raise funds and attract so-called “business angels.” Koski said 60 such potential investors attended this year’s May meeting, versus only seven in 2012.

Indeed, the Finnish wave is spreading. Aalto’s Laitinen confirmed that many of his graduates who have not launched their own lines are now working at major companies, including Balenciaga, Lanvin, Saint Laurent, Maison Martin Margiela, Calvin Klein, Levi’s, H&M and Nike. “Before, designers had a domestic view; they catered to the Finnish market,” Laitinen said. “This generation definitely has a wider perspective.”

MODEL: CAMILLE/SILENT; HAIR BY KAZUE DEKI AND MAKEUP BY MEGUMI ITANO, BOTH AT CALLISTE

Satu Maaranen: “We don’t just decorate, there must be a function. For each cut, color or print, there must be a reason. This comes from my strong history of industrial design,” said Satu Maaranen, 29. Her spring lineup, her first, is an extension of her Garment in Landscape study, which won her the Grand Prix in Hyères. The designer, who is also on the women’s wear design team at Marimekko, proposes bold silk-screen prints as well as sand- and grass-coated materials via a technique she invented at Aalto University. A printed collar shirt retails for 600 euros, or $809 at current exchange, while a demi-couture cocktail dress goes for 2,070 euros, or $2,791.

Siloa & Mook: “Finnish fashion has become more experimental and brave, still keeping in mind its heritage,” said Laura Juslin, 31, who was instantly hired by young Finnish label Siloa & Mook when its chief executive officer Otso Lindfors spotted her 2012 Aalto graduation collection at the school’s annual presentation. Juslin’s spring lineup features mosaic patterns on pleated leather skirts and hand-painted silk tops whose surfaces mimic rough sand. Prices range from 250 euros, or $337, for a top to 3,500 euros, or $4,719, for demi-couture items such as a skirt made from reindeer leather, which Juslin cut into pieces, then reassembled in the form of little appliqués imitating rose petals. Now in its third season, Siloa & Mook is stocked at My o My in Helsinki and Runway Boutique in Saint Petersburg, Russia.

Sasu Kauppi: Producing high-end sportswear with a humorous twist, Sasu Kauppi, a 2009 Aalto University and Central Saint Martins graduate, found inspiration in the Eighties movie “Back to the Future” for spring. Kauppi, 31, designed a series of fantasy prints and splashed them on oversize sweatshirts with matching pants in cotton-jersey mixes. Tops retail from 90 euros, or $121; a bomber jacket goes for 400 euros, or $539. Stockists include Primitive in London and La Substance in Los Angeles.

Saara Lepokorpi: Another Aalto graduate, Saara Lepokorpi, 35, develops several new fabrics each season. For spring, she came up with string panels made from twisted viscose cords that she dyed in various colors and placed next to each other to create a rustic-looking striped surface on folklore-inspired bulky T-shirts and the apronlike fronts of otherwise simple skirts. Prices range from 200 to 1,800 euros, or $269 to $2,427. The designer is stocked at My o My in Helsinki and Hong Kong’s Blogger Republic.

Huang Ting-Yun: Huang Ting-Yun’s 2013 graduate collection at Aalto created quite a buzz. Challenging traditional sartorial practices, the Taiwanese-born designer deconstructed faux fur by embroidering it to an extent that “the embroidery ‘destroys’ the texture, [letting] parts of the surface become flat,” she explained. “The same idea was applied to leather and Neoprene.” Ting-Yun, 29, is currently setting up her new studio and looking for a production source. Expected retail prices range from 150 euros, or $201, for a basic collar shirt to 800 euros, or $1,072, for a faux fur jacket.

Marimekko: To keep its finger on today’s pulse, Marimekko this year turned to Teemu Muurimäki — a 2001 Alto graduate previously in charge of women’s wear for Dolce & Gabbana, Armani Collezioni and Bottega Veneta — to design its 2014 Unikko (“poppy”) collection. “The silhouettes are inspired by Marimekko’s clean lines with a touch of soft femininity and extreme volumes [ranging] from high-waisted shorts to voluminous maxidresses,” Muurimäki, 39, explained. He played with scale, cutting the flowers out of the printed fabric and using looped pleats to imitate flower petals for volume. Daywear retails from 119 to 399 euros, or $160 to $538, at Marimekko stores.