VIENNA, Austria — A selection of colorful Rudi Gernreich dresses contrasting with the all-black sleek Helmut Lang looks at the entrance of the MAK Museum of Applied Arts here sets the tone of the first comprehensive exhibition of Austrian fashion.

The designs are strategically placed on a powerful 21.3-foot-high open installation created by architect Gregor Eichinger, which allows visitors to directly experience about 250 fashion pieces, from clothes to shoes, handbags and accessories by 60 designers, with a 360-degree view.

“We are all children of Tetris,” said Eichinger about the concept behind the towering structure, inspired by the classic Eighties game. “Fashion is about movement and living in clothes, and this helps get the 3-D sense into space.”

Hermann Fankhauser, one half of the Wendy & Jim design duo with Helga Ruthner, said the installation shows “an intellectual reasoning behind it, not just placing dresses on a doll, or a mannequin.” In 1999, the designers were the first from their nation to participate in Festival de la Mode in Hyères and they were students of Lang at the University of Applied Arts linked to the MAK. From Lang, Fankhauser learned that the “key to success is to work on your own language, and to say something outside the mainstream.”

While “a lot has been done in the past 40 years,” the exhibition, aptly called “Show Off. Austrian Fashion Design,” opening on Friday and running until July 12, comes at the right time, said Fankhauser. “Austrian designers have not had such an international recognition, despite their interesting position in schools and design.” Why? “Maybe because Austrian fashion is not so commercial, it’s more conceptual, connected to art,” he said.

Arthur Arbesser said he generally felt “ambivalent toward fashion exhibitions. Personally I prefer to see fashion on human beings, for the movement of clothes on the body, but [Eichinger] is a great Austrian architect and he did a fantastic installation that brings life and energy to the objects. It’s a great honor for me, to be able to show eight pieces that are recognizably mine and show my evolution.”

Arbesser, who spoke on the phone upon his return from Berlin, after the inauguration of Richard Strauss’ “Der Rosenkavalier” that premiered on Sunday at the Stadtsoper in Berlin and for which he designed the costumes, enthused about the MAK, defining it his favorite museum by far. “I’ve been so many times and it has given me a lot of inspiration and it’s the first museum with a Helmut Lang archive.”

During a preview walk-through, cocurator Andreas Bergbaur, who has worked in communication for brands ranging from Jil Sander and Versace to Roberto Cavalli, said the installation allows for “an intimate connection with the clothes,” which can be seen and approached from different angles. The only clothes that were glassed in were those from Helmut Lang, as they were loaned by museums. Asked if Lang had been involved, Bergbaur nodded firmly. “Very much so, in the tiniest details.”

Christoph Thun-Hohenstein, director of MAK, which he noted was the second-oldest museum in the world after London’s Victoria and Albert Museum having been founded in 1864, expressed his pride in the Helmut Lang archive, which he underscored expressed the designer brand’s corporate identity, and the mix of tradition and modernity of MAK, which comprises a variety of unmissable items, ranging from Gustav Klimt’s cartoons for the mosaic frieze of the Stoclet House in Brussels to Otto Prutscher’s wine goblets, plant stands and interiors, or Biedermeier textiles, an antique 16th-century silk carpet, and one of the most comprehensive Asian pavilions.

“What can design do to make the right decisions and improve the world?” he wondered, pointing for example to Wolford biodegradable innerwear, as the museum dedicates several rooms to issues about climate change and planet care and is planning an exhibit on the topics to be staged next year.

“Fashion is applied art, just as much as architecture, design, decorative arts — we had to set up a comprehensive fashion exhibition, then we can focus on single designers,” he said.

The “Show Off” exhibition also displays large-format prints by 34 fashion photographers, including the likes of Elfie Semotan, Rudi Molacek, Günther Parth and Udo Titz, to name a few.

In a room peppered with Franz West sofas, large screens project interviews with 25 personalities in the Austrian fashion scene, from Elisabeth Längle, a big promotor of Helmut Lang in the early Eighties, to Gery Keszler, founder of the Life Ball Vienna and make up artist who worked for Thierry Mugler and Jean Paul Gaultier in the Eighties.

In another room, tilted screens showing looks from the Austrian designers who participate in the exhibition flank a red carpet symbolizing the runway. 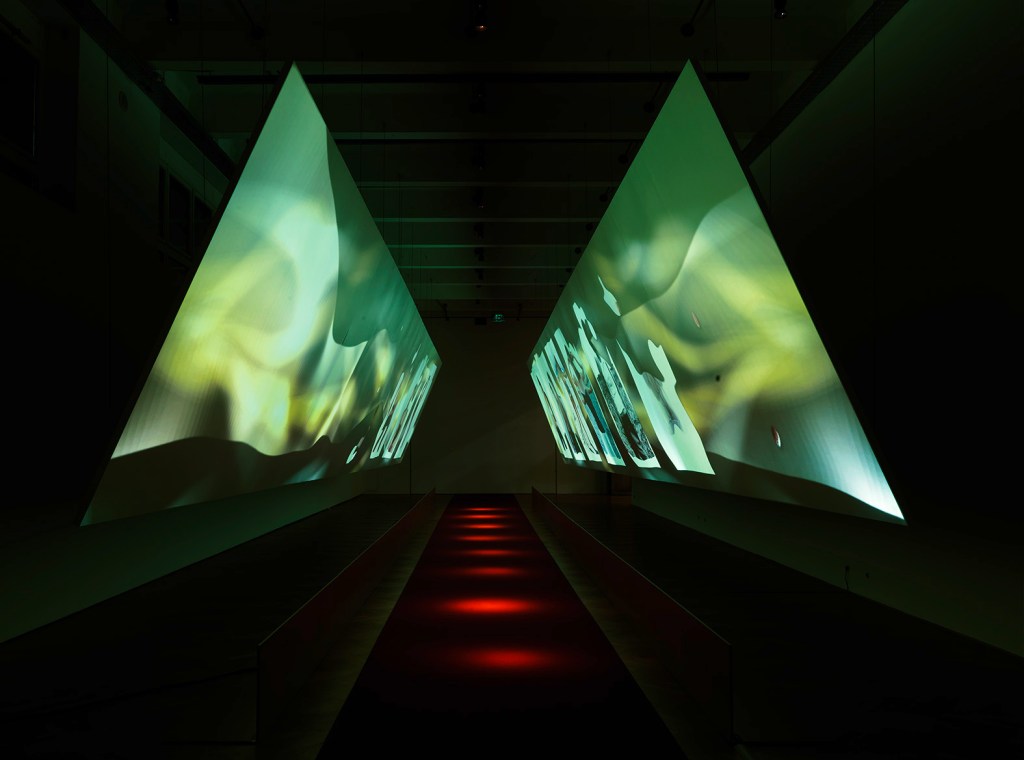 A view of the exhibition.

From there, visitors can see the evolution of media starting in the Eighties — a moment that gave Vienna its “big break,” said Bergbaur — pointing to copies of the influential Wiener magazine.

Guest curator Ulrike Tschabitzer-Handler said she worked “very closely with the fashion designers” on selecting the looks, “without restrictions.”

Among the young and up-and-coming designers are the Lagos-born Kenneth Ize, who studied and built his career in Vienna and was nominated for the LVMH Prize last year; Andreas Kronthaler for Vivienne Westwood; Christoph Rumpf, winner of fashion Festival de Hyères in 2019; Peter Pilotto; the Bless conceptual fashion design duo, who worked with Martin Margiela in 2002; Florian Ladstätter Jewellery design, who has collaborated with Comme des Garçons and Hussein Chalayan, and Marina Hörmanseder, who has created leather corsets for Lady Gaga and Rihanna, and has collaborated with Nike.