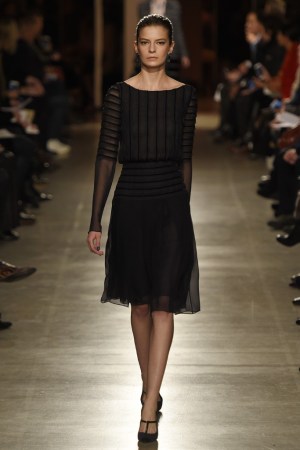 Working with WWD’s coverage of the fall 2015 shows, predictive analytics firm First Insight reached out to consumers for their reactions to 15 looks from each of 20 different collections. It then compiled the results for the three most popular looks in each collection.

De la Renta generated the top selection overall, with a 71 percent positive response to a navy silk chiffon dress with velvet and lace trim. But the second-most popular item in that collection tied with the favorite look from Ralph Lauren, a lace bodiced and Empire-waisted dress, for second place with a 69 percent approval rating. And de la Renta came in third place with a 67 percent approval rating for a belted eggshell suit.

The most popular items from the Tory Burch and Michael Kors collections tied for 10th place, with a 62 percent approval rating, and there was a three-way tie for 12th place, at 58 percent, that added Coach and Prabal Gurung to the list and gave Jason Wu a second spot in the top 20.

Although reports of his appointment as de la Renta’s creative director had circulated since September, Copping was named to the post on Oct. 13 following five years as artistic director of Nina Ricci. Oscar de la Renta himself succumbed to cancer after an eight-year battle with the disease just a week after Copping’s appointment.

The participating consumers in the First Insight survey — 3,075 females and 205 males — were asked to rate the items in each collection on a five-point scale, from love to like, neutral, leave or hate. The love and like responses were counted as positive reactions.

Respondents also were able to leave comments. “I like this enough,” wrote one of the participants of the de la Renta dress that scored the highest ranking. “It looks nice and flowy. I like the contrasting vertical and horizontal stripes.…[But] I think I would constantly be trying to get the stripes on the skirt to sit perfectly straight all the time.”

First Insight and WWD tagged the selections offered to gain perspective on viewers’ general feelings about trends for the fall season. While the top picks tended to be dark and elegant, purple generated the strongest positive response among the colors offered (45 percent), followed by white (37 percent), blue and cream (35 percent each) and gray and black (34 percent each).

Save for a preference for pink among younger browsers, First Insight found little fluctuation in color picks by age. Purple and pink were the two most popular choices among those aged 19 to 29, while blue and purple scored best among both the 30 to 44 and 45 to 59 demographics. Those 60 and over tended to prefer purple and white.

Evaluating the selections by pattern, solids scored best with all age groups except those between 45 and 59, who opted for polka dots instead. Overall, solids garnered a 35 percent positive response; geometrics, 32 percent; florals, 30 percent; polka dots, 29 percent, and abstracts, 24 percent. Positive responses were identical for outfits with maxi and mini hem lengths, both at 33 percent, with midis rating 29 percent approval.

First Insight’s predictive analytics derive in part from its online game “What Would They Pay?” in which consumers indicate how much they’d be willing to spend on an item as an indication of its vulnerability to markdowns and price erosion. “This also gives us an ideal platform to study the value of a particular brand or a brand with a name attached to it,” Jim Shea, the company’s chief marketing officer, told WWD in December.

The firm adapted the game for the fall 2015 collections season to determine, based on historic prices, the strength of demand for the items showcased on the runway.

“As expected, for most brands, respondents at higher income levels are willing to pay more for the same style,” noted Joe Callahan, First Insight’s director of marketing. “For some, such as Jason Wu and Rebecca Minkoff, respondents at lower income levels were willing to pay even more than those at higher incomes. This means that the value of Jason Wu and Rebecca Minkoff styles is recognized by those at income below $125,000, and this data could help inform their marketing strategies for these styles.”

The game is available to view here.