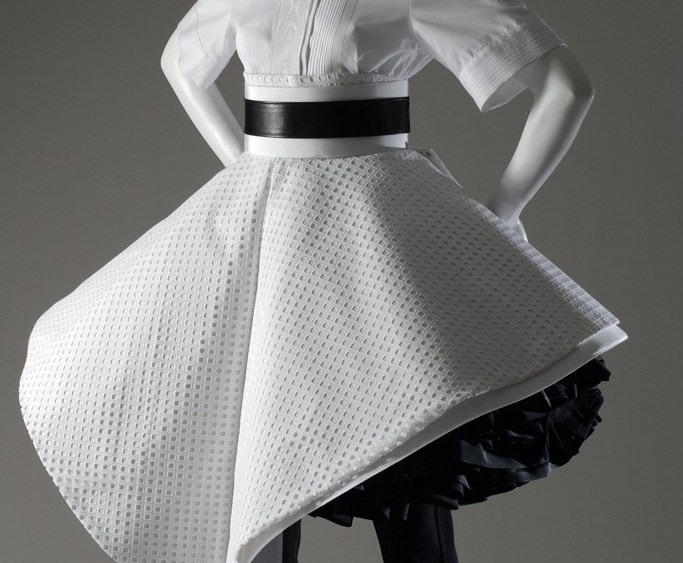 By making its new exhibition, “The Great Designers,” a two-part deal, the Museum at FIT will cover the 20th and 21st centuries and will no doubt spare a few egos in the process.

Fifty cutting-edge pieces are showcased in “The Great Designers, Part One,” which debuted Tuesday, and 50 others will be displayed when “The Great Designers, Part Two” opens on May 23. For the first part, there are styles such as a Rick Owens bat-wing jacket with a slinky skirt and an armor-esque Gareth Pugh dress with patent leather stripes. Once the museum’s Valerie Steele, Patricia Mears and Fred Dennis compiled a list of the 100 most important designers and their most important pieces, the museum used the exhibition as an opportunity to acquire a number of items, including never-before-seen ones.

A silver Thierry Mugler femme fatale-type evening gown from the Eighties is one such find, as is an embroidered Alexander McQueen coatdress for Givenchy from the Nineties. Ditto for a siren-red Valentino gown from the designer’s 2008 farewell collection. Part One opens with an Armani evening gown encrusted with Swarovski Elements. In keeping with the alphabetical order, there is lots of old and new Balenciaga and Chanel all the way through. Organized by Steele, Jennifer Farley and Colleen Hill, Part One runs through May 8.

The two-part exhibition is an offshoot of the Taschen-published book, “The Great Designers: Fashion’s Hall of Fame from A to Z,” that will highlight 500 of the museum’s holdings when it is released in April. A year’s worth of cultural events focusing on the 100 designers featured in the book are being organized to try to bring the pages to life.

Having taught a Great Designers course at the Fashion Institute of Technology years ago, Steele said the subject is one she knows people respond well to. “Certainly the culture of designers as personalities is one that is very much recognized today,” she said. “This is an unusually accessible show that will appeal to members of the public as much as it will to people who work in fashion.”

During a walk-through of the new show Tuesday with members of the Couture Council, Steele was asked more than once, “Where’s the Rei Kawakubo?” “I told them, Don’t worry. It’s in Part Two. We wanted to save some fabulous pieces.”