“I might have to streak, to compare with David [Hamilton], who I think stole the show,” said Bobbi Brown, who gave the commencement speech at FIT.

By Lisa Lockwood and Lauren McCarthy on May 23, 2014
View Slideshow 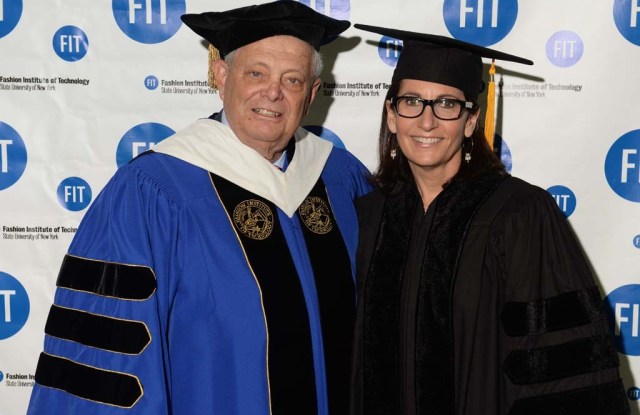 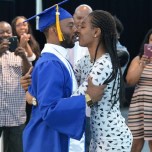 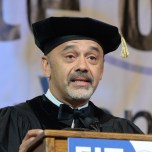 NEW YORK — “I might have to streak, to compare with David [Hamilton], who I think stole the show,” said Bobbi Brown, chief executive officer and chief creative officer of Bobbi Brown Cosmetics, who gave the commencement speech and received an honorary degree of Doctor of Human Letters at the Fashion Institute of Technology Thursday.

Brown was referring to student government president Hamilton, who spoke about establishing the first FIT class gift and challenged the class to value people and passion over their paychecks. He then read a passage from “The Alchemist,” by Paulo Coelho, and said: “Fatima, will you help me make my dreams meaningful for the rest of my life?” and hopped off the stage and proposed to his girlfriend, Binta Diallo, in the audience. The crowd went wild, and she said “Yes.”

Talk about a memorable graduation.

Brown, whose beauty brand today is worth more than $1 billion and is a division of the Estée Lauder Cos. Inc, offered the graduates her five pillars for success. They are: Do what you love; more doing and less thinking; work hard, but smart; have no fear, and just be nice. She told the graduates they shouldn’t take ‘no’ for an answer, and shouldn’t be intimidated by adults, “because you are adults now.”

Brown, who in addition to running her cosmetics company is a best-selling author and editor in chief of Yahoo Beauty, then gave the grads some practical tips: Take care of your health; exercise; wear your seat belt; don’t drink and drive; keep your Instagram and Facebook clean; be thankful every day, don’t forget to have fun and kiss your parents.

“He’s a part of our DNA,” she said. She said Pomerantz has brought a lifetime of loyalty, passion and service to FIT. Through his Golf Classic alone, he has raised more than $2 million for the college over the years.

Pomerantz, a trustee for 28 years, is now trustee emeritus of FIT and was director of its foundation from 1976 to 2010. He served more than 10 years as chairman. In 1984, Pomerantz and his wife, Laura, donated $1 million to help launch FIT’s $5 million development campaign. In recognition, FIT named its Art and Design Center (also known as the D building) in honor of his father, Fred P. Pomerantz, founder of Leslie Fay.

Pomerantz said his father, Fred, never had the privilege of an education past the sixth grade and told him about “this wonderful school, where all the graduating students got jobs in the industry.”

He said he has watched FIT evolve “into this wonderful worldwide institution under the leadership of Dr. Joyce Brown. Fashion, more than most industries, thrives on innovation and talent, and these two attributes, combined with the guiding hand of the many gifted teachers here, have ushered many creative minds and talent within our industry.”

Pomerantz offered up this advice to the graduating seniors. “As you succeed in your careers, remember to be supportive of this wonderful school.”

Later that afternoon, students from the School of Art and Design and School of Graduate Studies gathered for their own commencement, with Christian Louboutin as keynote speaker. The shoe designer chose a pair of gilded slippers of his own design as his footwear for the occasion. “I’ve been trying to figure out a shoe to go with this dress,” he told WWD, gesturing toward his ceremonial robe. “I wanted something gold because it’s good luck.”

Louboutin opened his speech to the students with a pair of apologies. “I’m French, so I have to apologize for my pitiful English,” he said. “It’s a very difficult exercise for me to be here, because I’m painfully shy… But when they asked, I had to do it.”

He went on to name two important pillars for success: friendship and freedom. “Everyone told me never to do business with friends,” he said. “Well, I started my company with my two best friends and 23 years later, we are still the three best friends.” Freedom, he continued, was more of a subjective topic. “There is the freedom of joy and working, which I want,” he said. “But freedom is different for everyone…. It’s freedom of creativity.”

Louboutin paused to survey the audience. “I just saw one grandma start sleeping,” he joked. “That’s not nice.” Amidst the roar of laughter, he launched into his final thought. “Do not necessarily pursue a very specific goal,” he said. “Be gentle. Enjoy the process.”

The designer was later presented with a honorary doctorate of fine arts. The designer already had plans for his new certificate. “It has to go with me to Paris,” he said. “But I might Xerox it so I can keep one in New York.”