The incomplete cotton muslins on display in “American Beauty: Aesthetics and Innovation in Fashion” are an indication FIT’s newest show delves into design. 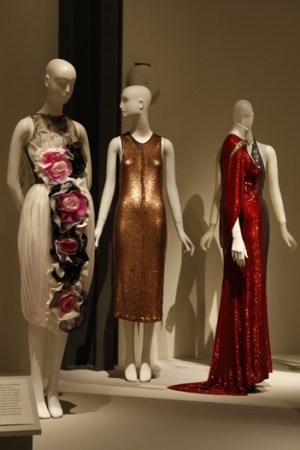 The incomplete cotton muslins on display in “American Beauty: Aesthetics and Innovation in Fashion” are the surest indication the Museum at FIT’s newest show delves into the inner workings of design.

Custom patternmaker Nicolas Caito personally inspected the muslins on the mannequins for Thakoon, Proenza Schouler and Francisco Costa to be certain they were just so. That attention to detail was just what curator Patricia Mears was after for the museum’s latest installment, which opens Friday and runs through April 10.

Rather than give a more predictable historic overview of American fashion, Mears has zeroed in on how the philosophy of beauty is relayed in the craft of dressmaking. During a preview of the exhibition Wednesday, she said, “One of the things I wanted to do with this show was to not make it about sketching, diffusion lines, marketing or anything else. I wanted to show people who really know how to make clothes.”

Noting that what made Madeleine Vionnet and Cristóbal Balenciaga great was they were “fine craftspeople who had true artistic sensibilities,” she was eager to highlight the technical ingenuity of American designers. In doing so, Mears hopes “American Beauty” will inspire other curators and fashion editors to focus on the amount of work that goes into a garment’s design as opposed to the designer’s latest ad campaign or marital status. “We say Halston was a great designer, but what do we recognize him for? Studio 54 and him losing his name. No one stops to look at how his clothes were made and the ease and luxury that came out of his ability to make a dress,” Mears said.

To that end, his American Rose gown consisting of eight two-layered pattern pieces sewn meticulously together serves as the marquee piece for the exhibition’s promotional material. All in all, there are 90 creations from 25 designers, but it’s hardly a roundup of the usual suspects. Save for Calvin Klein’s Francisco Costa, the contemporary designers and brands featured in the show have more of an indie spirit, such as Rick Owens, Rodarte, Yeohlee Teng, Costello Tagliapietra, Isabel Toledo, Maria Cornejo, Ralph Rucci and Jean Yu. Adrian’s hand-beaded dress for Joan Crawford in “The Bride Wore Red,” Charles James’ La Sirene evening dress, a Rucci-made dress with a 117-piece gored skirt and Rodarte’s steam-dyed tulle gown are among the more dramatic pieces.

The finery of more obscure names is also on display, including dresses from Jessie Franklin Turner, whose work dates from the late 1910s; Elizabeth Hawes, and Charles Kleibacker, who was known as “master of the bias” and is expected at tonight’s opening-night party. Mears, meanwhile, already has anticipated grumblings from the opening-night crowd.

“I know people will ask, ‘Why wasn’t so and so included?’ And even a few of the designers who are featured had questions. James Galanos asked, ‘Why did you use such plain examples of my work in the show?’” Mears said. “For me, that was a really great halter dress with old-fashioned smocking in the front for shape and a simple drape on the back that makes it elegant.”

In step with other cultural institutions that grasp the importance of having ancillary digital components with new exhibitions, the museum has partnered with online retailer Yoox.com. Near the entrance, a flat-screen TV plays a behind-the-scenes look at the show and that video also will be posted on Yoox.com, along with designer interviews. In addition, 1stdibs.com, an online resource for antique and vintage design, is a main sponsor of the exhibition.