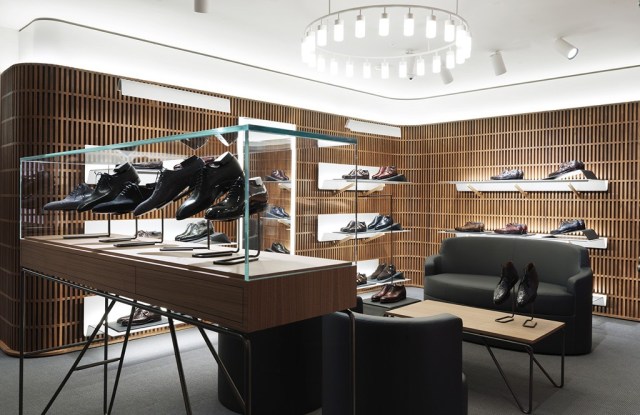 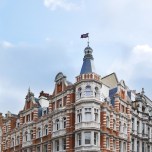 “Bond Street is the epicenter of London, and the right place to express the new Bally,” said Frédéric de Narp, the company’s chief executive officer. “Do you see that flag?” he said, pointing to a rippling claret-colored Bally standard flying high above the Mayfair street. “It’s metal, and it never goes down.”

Hopes are high for the 163-year-old Swiss luxury brand, which has undergone a sea change over the past year with the arrival of de Narp and design director Pablo Coppola and a new, more luxury-focused vision. It is the latest attempt to reinvent Bally, which has seen a string of ceo’s and designers come and go over the last six years, ever since JAB Holdings, formerly known as Joh. A. Benckiser Holdings, bought the brand from TPG. JAB also owns Jimmy Choo, Belstaff and Zagliani.

The Bally maison, located at 45-46 New Bond Street, spans 7,560 square feet, more than half of which is dedicated to retail.

The women’s collection is on the ground floor, and men’s wear is on the lower ground, while the first floor is for shoe services such as made-to-order and “made-to-color.” For the latter, customers can choose a specific shade and watch as their shoes are dyed in front of them.

On that floor, Bally is also offering a series of “therapies” such as shoe-shining — which is free to customers — waterproofing, and “glassage,” which involves using eight layers of wax to create a mirror glaze on leather.

In tandem with the opening, Bally has introduced claret-colored branding with the name embossed on the front. It has also taken its e-commerce operations in-house and will be working with students from the London College of Fashion on determining the service culture of the future.

“There is a battery of services on offer. We want the customer experience to be memorable and unique,” said de Narp during a walk-through. An opening cocktail and dinner are planned for Oct. 22.

The building’s upper floors house the stockrooms, the marketing office and, in the future, will also be home to a shoe academy that will train future cobblers.

Chipperfield took his interior cues from the Bally archives, looking in particular at the collaboration between the brand and the modernist architect and designer Marcel Breuer in the Twenties. The walls, with their rounded edges, are covered in a textured American walnut timber and feature shelves that can easily be moved and removed, while brass counters are spare and linear. There are also “shoe walls” that feature small shoe-box-like shelves to be used for display or storage.

Staircases have leather-wrapped railings while their walls are lined with gray stone imported from Switzerland. The leather furniture all has a midcentury-modern vibe, while the textiles have a rugged, outdoorsy feel: Carpets are made from hemp, and the walls in the changing rooms are covered in thick felt.

De Narp said the brand is skewed toward men, with 70 percent of sales coming from that category, and 30 percent from women’s fashion and accessories. He said the brand is endeavoring to address that imbalance and would like to see a split between the two.