“Walls: The Best of Decorative Treatments,” her fifth and latest design tome from Rizzoli, delves into every aspect of the art.

By Rebecca Kleinman on May 1, 2012
View Slideshow 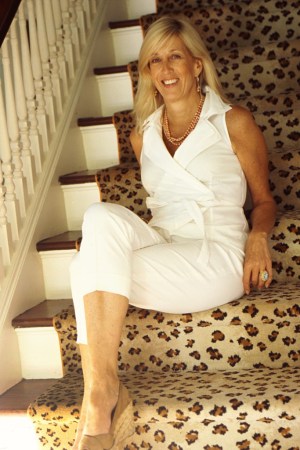 Parisian interior designer Florence de Dampierre is having a banner year. The Johnny Appleseed of French chic, who penned the book on the subject, bien sûr, unveiled her licensing partnership with John-Richard at North Carolina’s High Point home show in April. As the industry buzzed about the fresh collection of furniture, accessories and lighting, de Dampierre — who earned millions dealing 18th- and 19th-century painted antiques during her initial New York venture in the mid-Eighties — is in the midst of a book tour in addition to her usual lecture circuit at universities and women’s clubs.

“Walls: The Best of Decorative Treatments,” her fifth and latest design tome from Rizzoli, delves into every aspect of the art, from Pompeian frescoes to Rufus Porter’s nature-themed stencils around New England, to Louis XIV’s porcelain pavilion at Versailles that gave birth to the chinoiserie obsession across Europe. Many interiors haven’t been previously published, such as the 18th-century frescoes of medallions and griffins in the Ferragamos’ Tuscan villa.

“At first the design world mistook me for a bimbo because I was blonde. These books show my intellectual side and passion for research,” she says.

“Walls” holds a bit of added weight, since finishes are one of her signatures, appearing everywhere within her new furniture line, including cabinets hand-painted with garden trellis scenes and glass tops of scratch-resistant chinoiserie. A best-selling bed frame of white wood with a patina that gains character as use mars its carvings.

“It’s a modern interpretation of the gilded mirror on the cover of my book ‘French Chic,’ ” says de Dampierre. “I didn’t want to do chintz, which is yesterday’s news, or traditional antiques, since they’re oversaturated, whether authentic pieces or Restoration Hardware reproductions. It had to be an evolution of all that, the new cozy chic.”

She isn’t afraid of color, either, which extends to her dress. At a recent talk to a full house in Palm Beach, Fla., she wore head-to-toe purple down to the Prada sunglasses, nail polish and Hermès bag, apparently the only one ordered in the hue. A purple Ultrasuede dress by Halston inspired her collection’s sofa of the same material in African violet. She almost always shuns black.

“I don’t even own a pair of black shoes. How boring,” de Dampierre says.

Since most people aren’t as fearless, she designed her home collection in a mix-and-match palette with lots of orange, aqua and her preferred purple. Though her own Manhattan pied-à-terre is modern and simple (especially compared with her 19th-century home base in Litchfield County, Conn., which was thoroughly mined in “French Chic”), de Dampierre is pleased to see minimalism, or what she dubs “dentist chair decor,” on the wane.

“It’s a pendulum, and people want warmth again, with wallpapers, brass hardware and whimsy,” says the proud owner of a dining table fashioned like a tree trunk.

With the youngest of her three children about to leave home, the soon-to-be empty nester is strategizing her next phase. She’s over the moon about John-Richard’s manufacturing scope, and the launch of its showroom at New York Design Center in September. But what this Dorothy Draper part deux really needs is a hotel commission.

“I’m ready for my Greenbrier moment,” she says.