Industry leaders were told that as cost pressures on China-made apparel grow, Chinese fashion houses must learn to build brands for customers at home. 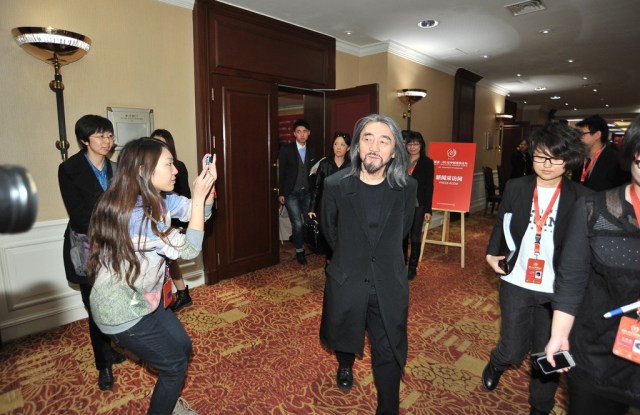 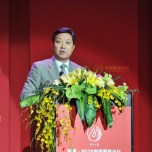 BEIJING — As the world economy struggles and cost pressures on China-made apparel grow, Chinese fashion houses must learn to build brands for customers at home, industry leaders were told at the China Fashion Forum here.

The annual forum drew guest speakers such as Yohji Yamamoto; Jane Rapley, dean of Central Saint Martins College; and prominent Chinese artist Liu Xiaodong. The message for an industry facing a difficult year ahead was clear: Get away from low-end manufacturing and focus on developing Brand China, at home and abroad.

“China is already one of the major economic powerhouses of the world and is poised to become a major cultural influence over the next 20 years. Part of this tidal wave will be the exporting of Brand China,” Rapley told the forum, which is organized by the China National Garment Association.

At first glance, the year ahead looks dreary for the Chinese apparel industry. The country’s powerhouse economy, which sailed through the last recession to become the world’s second largest, will this year see growth slow. The European economic slowdown means less demand for made-in-China goods, which have been so important to creating jobs and buying power for Chinese consumers. And the costs of production in China are rising. Labor unrest in the country’s southern manufacturing belt has led to higher wages and better working conditions; the central government’s focus on clean technologies — while badly needed — has also increased the cost of manufacturing. Multinational corporations are beginning to shift their production from China to cheaper bases.

There is good news: While slowing, China’s economy is still growing faster than almost anywhere else in the world, and Chinese consumers have more buying power than ever. Official government statistics from 1990 presented by Ministry of Commerce researcher Mei Xinyu showed the average urban Chinese consumer had just over 1,278 yuan a year in disposable income (about $200 at today’s exchange) and spent just under 180 yuan ($28.60) on clothing. By 2010, those numbers had risen tenfold, to an average 13,471 yuan ($2,138) in disposable income, and an annual expenditure of 1,444 yuan on clothing ($229).

“China is a center for consumerism. Chinese people have very strong purchasing power and we have a strong desire to purchase and consume. China has become the most essential market in the world,” Zhang Yiwu, a leading cultural critic, said. “This is a fundamental change, which can decide the future of the world.”

With 1.3 billion potential clients, it’s not much wonder both Chinese and foreign clothing companies are rushing to lock down their share of the market. But the challenge, industry watchers said, will be capturing the imaginations and buying power of the emerging middle class with midrange clothing lines. Both Spain’s Zara and Japan’s Uniqlo have large and growing followings in China; the challenge is to create a similar home-grown brand.

“The good brands here do not want to be compared to other brands. They want to construct their own brands with their own identity and their own cultural heritage,” said Wang Jun, secretary-general of the China National Garment Association. “In the future the number of brands will become more clear and cohesive.”

But Chinese designers and retailers, swamped with foreign competition and struggling with a reputation for poor quality and service, still have a long road ahead. Branding is still in its fledgling stages; Chinese actresses and celebrities, for instance, are still more frequently seen in foreign designs than in homegrown creations. Local fashion magazines have neither hordes of devoted readers nor the tradition of criticism that drives design forward.

“There are a lot of brands, a lot of competition, people have wide options so you have to do well in the production. You have to have a specialty and offer service for the customer,” said Miao Hongbing, president of Chinese women’s wear boutique chain Beijing White Collar Fashion Co. The focus this year will be on design, staff training and promotional events, as the company tries to hold its own against foreign competition and better establish itself as a purely Chinese high-end retailer. The company has tried to build its image by clothing local celebrities; during last month’s National People’s Congress, several television presenters wore White Collar brands.

Still, Hongbing admitted to nervousness over the year ahead. “This year must be a bad year. The economy is bad… [and] people’s mentalities are going through some big changes as well. People’s willingness to consume is declining and the market is depressed, we’ve been feeling that since the start of the year,” he said.

Key for Chinese entrepreneurs trying to crack the market will be e-commerce platforms, including China’s wildly successful Taobao, which has become the local answer to eBay, and establishing a presence on leading Web portals Baidu and Sina Weibo, both of which are faithfully followed by China’s plugged-in, increasingly educated and worldly youth.

“We firmly believe that good brands for the general public have a brilliant future. That means all brands except luxury brands. Chinese companies do not have the ability to do luxury brands,” said Wang Wei, apparel and textile analyst at China Merchants Securities Co. “Domestic enterprises do not need to worry because the Chinese economy provides a solid support for them. Chinese companies need to pay more attention to their own cultural influences.”

For his part, Yamamoto said that building an audience at home often requires making an impact abroad; Japanese retailers, he said, were reluctant to stock Japanese designs until they were recognized in Paris and Milan.

Fashion theorists say China is also still lacking its great fashion moment — as in the spread of American jeans after the Second World War, Chanel with its representation of the changing role of women in society or Dior as a reaction to the booming post-war economy. That may change in the next generation, driven by an increasing number of young and enthusiastic Chinese design students entering schools abroad.

“[We are talking about] moving from made in China to designed in China and a further transition to conceived in China. Who are you manufacturing for and who are you selling to?” Rapley said. “You are all over the world right now. Make sure you use [your designers] well. Put them at the heart of your business. Make sure your managers know how to use them productively. It’s not as easy as it may seem.”