MILAN — Milan Fashion Week in February is going to have a new brand to watch: Del Core.

Don’t expect anything minimal from the new women’s brand, which was founded last December by Daniel Del Core, former special projects and VIP designer at Gucci, with the financial support of a private investor, who is keen to remain anonymous.

Del Core, along with Gucci’s creative director Alessandro Michele created, for example, the bold look that Lana Del Rey donned at the Met Gala in 2018 that included a cream white dress with gold embroideries and a sacred heart plate struck by multiple daggers and a dégradé blue headpiece with wings. Among the most significant milestones Del Core achieved during his seven years at Gucci, five of them working with Michele, the designer, 32, also mentioned working with Björk on the creation of the eye-catching pleated iridescent PVC and Lurex organza dress that the musician wore in the video for “The Game” single and that was showcased at the Gucci Garden space in Florence.

“Working with Björk has been incredible, she is pure talent,” said Del Core. “Having the chance to work with that type of talents is a real blessing.”

The designer, who was raised in a small village in Germany’s Black Forest and moved to Italy as a teenager for a cultural exchange, also praised the type of leadership that Michele created at Gucci. “It has been great working for him. He is so good at orchestrating the team, but at the same time he leaves you a lot of creative freedom. I learnt so much from him.”

Del Core, who completed his studies in fashion and graphic design, is passionate about science fiction — and this clearly resulted in the aforementioned gown designed for Björk — and everything related to nature. “I know that this might sound a weird combination,” admitted Del Core, who cut his teeth as a designer at Dolce & Gabbana, before working at Versace; Zuhair Murad between Paris and Beirut, and then at Gucci in Rome. 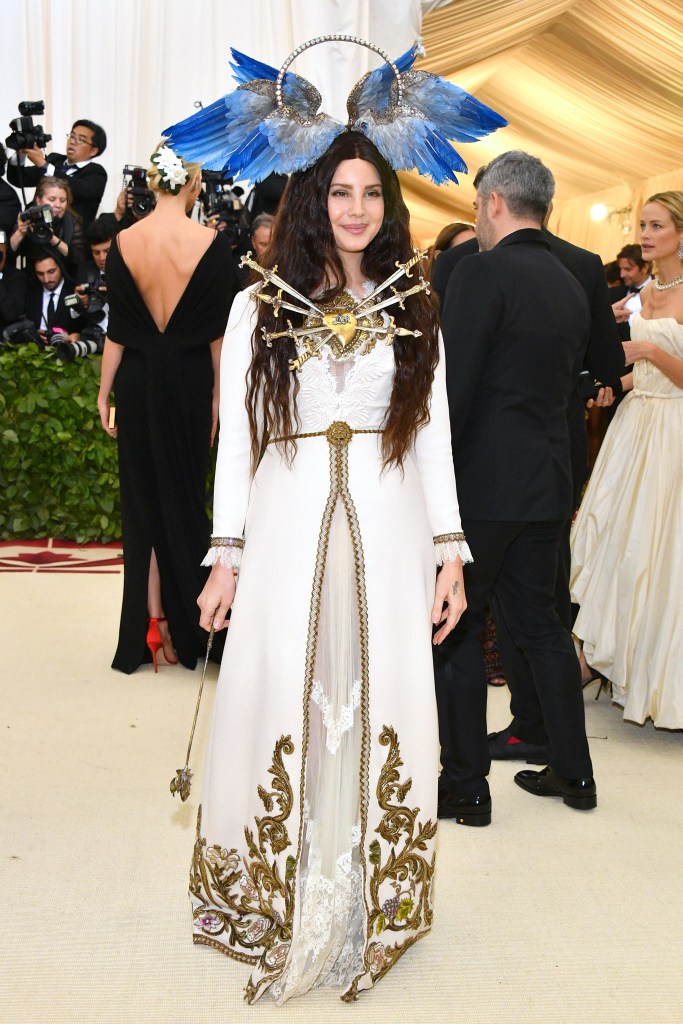 Lana Del Rey wearing Gucci to the Costume Institute Gala at the Metropolitan Museum of Art on May 7, 2018 in New York City.  Courtesy of Getty Images

Last December, the designer started working on the brand bearing his Italian last name (it derives from his Apulia-born grandfather who, like many Italians during the past century, moved to Germany to guarantee a better future for his family) — and two weeks before the lockdown imposed by the government to limit coronavirus infections last February settled in a luxury town house in the heart of Milan. The renovated building houses all the brand’s divisions, including a commercial showroom and an atelier, where part of the label’s prototypes and the made-to-order dresses are expected to be manufactured.

The idea was at first to focus on elegant dresses, but the designer revealed the collection is now meant to span across all merchandising categories, including shoes and custom jewelry.

“The original idea was to do something smaller, but then we agreed to launch with a full collection,” said the designer, who also lives inside the town house. “Since I started working on this project, I wake up every day at 5 a.m. My life is basically my work but I feel super excited and I really hope to be able to pay back the trust I got from those who believed in me and invested in this company.”

Del Core conceded that since he started working on this solo project his perspective on fashion changed a lot. “Before, I have to admit that when I was looking at others’ collections biting comments came so easily,” he said. “Now it’s different, I started looking at everything with more respect because I’m now more aware of the effort and dedication that there is behind every collection. When you work for big brands like those I had the chance to build my career in, you tend to forget these aspects.”

Discussing his plans for the brand, Del Core said he aims to create two collections a year transcending the idea of seasonality. “I don’t want to create too strong categorizations,” he said, adding that his ambition is to complete the offering with capsules dropped during the year.

The first Del Core collection, to debut at Milan Fashion Week in February, will combine ready-to-wear pieces with couture styles, which will feature a different label.

“I like the idea of presenting ready-to-wear and couture at the same time, because at the end the idea and the concept behind them is the same, even if the level of exclusivity in each couture garment is exceptional,” said Del Core, who hopes to be able to unveil his collection with a physical event. “I think that it would be fantastic and deeply emotional to feel the contact with the public and since we are going to present also dresses that require between 300 and 500 hours to be completed it would be important to give them the right stage to be fully appreciated.”