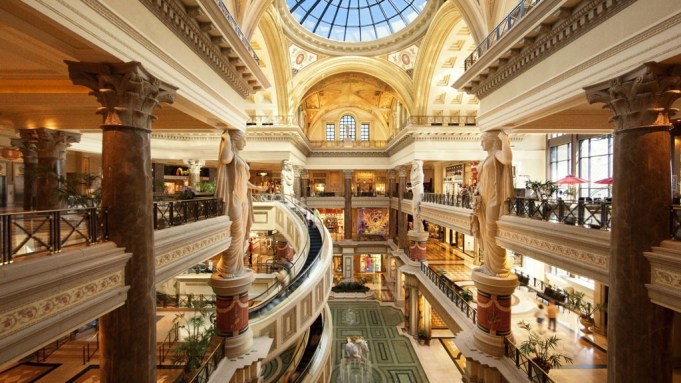 Caesar has been busy.

The Forum Shops at Caesars Palace in Las Vegas, where a statue of the Roman general graces the entrance, has opened a spate of new stores, remodeled or expanded existing stores such as Michael Kors and Tod’s, and re-merchandised the entire Appian Way section of the center.

“We’re always re-merchandising,” said Vicki Hanor, executive vice president of leasing for Simon Property Group Inc., which operates The Forum Shops. “We’re looking to create the best and most unique merchandise mix. There is a focus on luxury and we’ve been successful in bringing in some of the top brands this year.”

One of the most productive enclosed malls in the country, The Forum Shops registered sales per square foot of $1,750 last year, well above the industry’s average of $451, according to the International Council of Shopping Centers. “The economy is robust [in] Las Vegas and our sales continue to rise,” said Hanor. “We were the first in the Las Vegas market to introduce a luxury component 21 years ago and we’re still dominant on the Strip. Las Vegas is now recognized as a shopping destination and it’s transformed the length of stay two nights to 3.2 nights.”

The remodeled 22,000-square-foot Appian Way is located inside The Forum Shops near a Carrara marble life-size replica of Michelangelo’s David. New stores in Appian Way include Bottlehood, King Baby and Jimmy Crystal for jewelry;  Carina, selling fashion, and Forever Flawless, which offers skin-care items and cosmetics.