Calvin Klein said the new brand direction will ultimately follow one creative vision across all categories of business. 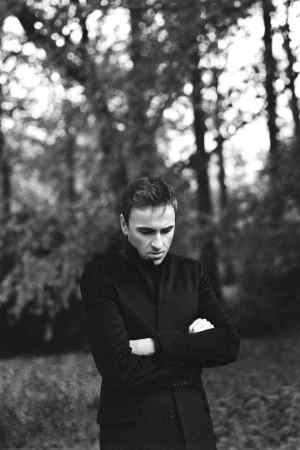 The stars are aligning for Raf Simons to become sole creative director of Calvin Klein Inc.

The American fashion company and its parent PVH Corp. on Tuesday took a major stride toward making that a reality by revealing plans for a new global strategy that would unify all Calvin Klein brands under one creative vision as it aims to build itself into a $10 billion retail brand. It did not provide specifics but, as a result, Francisco Costa, creative director of women’s Collection, and Italo Zucchelli, creative director of men’s Collection, are out. Both have been in their roles since 2003, when cofounders Calvin Klein and Barry Schwartz sold the company to PVH and left.

Fall 2016 was the last collection for both. Calvin Klein said Tuesday that there will be no men’s show in June or women’s show in September; instead the company plans to make presentations.

Reports that Simons, the former creative director of Christian Dior, was heading to Calvin Klein first surfaced last July and WWD reported on the likelihood of the move last fall. The problem has been that Simons has a binding and strict noncompete with Dior parent LVMH Moët Hennessy Louis Vuitton. But that agreement expires in July, according to sources, freeing the designer to join another company in August. Simons couldn’t be reached for comment.

Calvin Klein said an announcement on a new creative director will be made in “due course.” Asked whether Simons would be joining the brand, a spokesman for CKI, said: “The company does not comment on rumors.”

In the meantime, the company plans to operate the business as usual with the women’s and men’s Collection continuing to be designed, produced and presented by each line’s respective existing design teams. The Collection design teams will, in the interim, report to Michelle Kessler-Sanders, president of Calvin Klein Collection.

Steve Shiffman, chief executive officer of Calvin Klein Inc., said, “This creative strategy marks the beginning of another significant chapter in Calvin Klein’s brand legacy since Mr. Klein’s retirement. I would like to thank Francisco and Italo for their unwavering commitment to the Calvin Klein brand and their accomplishments over the past decade. They have both contributed immensely to making Calvin Klein a global leader in the fashion industry, and they have done so with dedication, focus and creativity.”

Kevin Carrigan continues as global creative director of CK Calvin Klein, Calvin Klein Jeans and Calvin Klein White Label, overseeing the collections that generate the bulk of the company’s revenues. Sammy Aaron, vice chairman of G-III Apparel Group and ceo of the Calvin Klein Divisions, said, “I think he [Carrigan] has done an incredible job for PVH. We believe it’s business as usual.”

Sources indicated that PVH never gave Costa and Zucchelli the resources they needed to be successful in their roles.

Simons is said to be very friendly with Collection president Kessler-Sanders. Over the last few months, while no one would ever confirm the rumor, the company didn’t deny they were negotiating with him either. At one point, Emanuel Chirico, chairman and ceo of PVH Corp., quickly ended a phone conversation when the subject turned to Simons. Twice, he told WWD that he had no comment about the rumor. Last month, sources indicated that Calvin Klein had a big meeting scheduled for this week and one of the topics would be Simons.

As reported in WWD last fall, Calvin Klein was among the brands that had made overtures to the Belgian designer, who is known for his minimalist leanings, art-world connections and bold approach to design. Having spent three-and-a-half years with Dior, Simons stepped down last October “for personal reasons,” and spring 2016 was his last collection. Both Simons and Dior described the separation as amicable after the designer and the company failed to reach an agreement on a new employment contract.

Industry sources believe that hiring Simons would be a real coup, in light of what has been the lackluster performance of the women’s Calvin Klein Collection, which is sold at the Madison Avenue freestanding boutique, as well as retailers and e-tailers such as Saks Fifth Avenue, Bergdorf Goodman, Stanley Korshak, Harvey Nichols, Matchesfashion, The Webster and Net-a-Porter; the limited distribution for Calvin Klein men’s wear — Mr Porter, The Webster, Carson Street, Opening Ceremony, Ssense are the top accounts; a minimal high-end accessories business, and the lack of a strong cohesive advertising message ­— which the company was well-known for under cofounder, former vice-chairman and fashion designer Calvin Klein.

Sources believe a Simons hire could elevate the image of the company and bring the business to another level. But he might not come cheap: Sources have indicated that Calvin Klein and Simons were in discussions about a pay package that could go up to $20 million a year.

One of the problems is that Collection is the engine that drives all the other businesses, but the brand hasn’t been able to get it off the ground and it reportedly is losing about $20 million to $25 million a year. Despite the fact that Costa has a large celebrity following for his red carpet dresses and is highly regarded as a designer, the women’s Collection business hasn’t retailed well and has a limited wholesale business. Men’s wear under Zucchelli has faced similar challenges. Sources believe that having one creative director over the entire company who’s able to connect all the dots could be a justified expense, considering that Calvin Klein does $8.2 billion in global retail sales. (When PVH acquired the brand in 2003, it was generating $2.5 billion in global retail sales.)

Costa, who has received critical acclaim and recognition for his work at Calvin Klein, has received numerous awards such as the Council of Fashion Designers of America Womenswear Designer of the Year in 2006 and 2008. He has also been honored by The New School’s Parsons School of Design, and was awarded the Mortimer C. Ritter Award given by the FIT Alumni Association. He has also received the 2015 Pratt Fashion Visionary Award and the André Leon Talley Lifetime Achievement Award from the Savannah College of Art and Design, among other awards.

“Francisco and Italo were huge players in reenergizing the Calvin Klein brand and aesthetic for more than a decade. Francisco Costa’s creative vision shaped the new direction for the house. I have no doubt that both Francisco and Italo will continue to have strong creative voices in the fashion industry,” commented Roopal Patel, senior vice president and fashion director of Saks Fifth Avenue. “I am excited to see what the future has in store under Calvin Klein’s new leadership.”

Zucchelli’s men’s wear skewed close to the streamlined and hyper masculine Calvin Klein look cemented in the Eighties and Nineties. Even though Hedi Slimane had pioneered the wan, superthin archetype, Zucchelli typically cast chiseled, athletic types that suited his strong-shouldered tailoring, bomber jackets and stadium coats. While his collections often ran counter to Milan’s often monolithic trends, he recently caught the attention of trendy stores such as Dover Street Market with his beefy shirts emblazoned with perfume names such as Obsession. Big name male celebrities at his shows in Milan, most recently Vine sensation Cameron Dallas, also added a frisson of excitement to his shows.

Sources believe the naming of one creative head is a smart idea.

“To have one unifying creative vision there would seem to make all the sense in the world,” said one source, who requested anonymity. “And all these design houses in Europe are playing musical chairs. Why shouldn’t the Calvin Klein company reexamine what they’re doing, too? One thing is for sure, fashion is about change. And if you think about it, nothing has changed over there in a long time, maybe the whole company should rethink its fashion position?”

Another source said hiring Simons would be a game changer for Calvin Klein, even though it would have to invest heavily to relaunch the Collection. Luxury has not been PVH’s bailiwick, and industry sources questioned whether the group is prepared to switch its strategy. “It would be a completely new direction in their strategy. Simultaneously it would be incredibly exciting,” said one source.

But others believe hiring Simons doesn’t align with the way PVH has run the company and how much the group is willing to invest in the Collection business. Since PVH acquired Calvin Klein in 2003, the Collection operation has been run on a tight budget. PVH is not known for spending lavishly.

Susan Sokol, founder of Susan Sokol Consultancy, said, “Francisco Costa in his role as creative director for the women’s collection, in my opinion, did a commendable job. Both the fashion press and entertainment world clearly supported his work all these years. What may have been challenging for Francisco was the support or lack of support the Calvin Klein management gave him.

“That particular business [women’s Collection] is quite small. There’s so much more to building a strong business than just designing beautiful, press-worthy clothes. There needed to be strong management around him on a day-to-day basis to properly execute and support his vision. I am not sure he had that kind of support all those years. It was a lot of smoke and mirrors, with expensive marketing campaigns, high-profiled celebrities but not much there behind it,” Sokol said.

“As far as Raf is concerned, I think his [potential] appointment is a very exciting move for the brand. Not only is his aesthetic in sync with the heart and language of Calvin, having one singular vision to connect all the dots is the way to go,” she added.

“I learned from my many years working under Calvin that change can be invigorating for a legacy brand,” said Kim Vernon, president and ceo of Vernon Co., a consulting firm. “PVH currently has the capital to invest in the Collection business, which they have relatively ignored versus the other product categories. I hope the next announcement is the long-rumored hiring of Raf Simons who has the vision, creativity and talent to lead the company forward. It’s a very exciting proposition.”

Meantime, PVH will be saving some money in 2018 when its agreement with the designer Calvin Klein expires. According to a previous 10-K from PVH, the group paid him 1.15 percent of total worldwide net sales of products bearing any of the Calvin Klein brands with respect to sales made during the first 15 years following the closing of the acquisition in 2003. That deal expires in 20 months.

For the fourth quarter ended Jan. 31, PVH saw a 15 percent gain in Calvin Klein’s revenue. It also saw a 31 percent rise in Calvin Klein earnings, driven by higher operating margins in Europe and a strong performance in the underwear business.

In 2015, PVH generated $8 billion in revenue, about 45 percent of which came internationally. The company’s designer brands, Calvin Klein and Tommy Hilfiger, together generated more than 75 percent of its revenue.