Ten years later, Costa is in full creative ownership of the label. 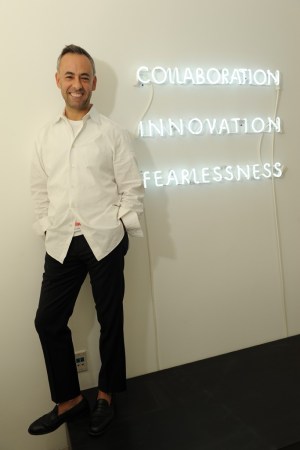 Francisco Costa posed the question to himself again and again upon being offered one of the most exciting—and daunting—positions in American fashion: the women’s creative director for Calvin Klein Collection. His entrée would be fraught with comparison; who steps seamlessly into a spot vacated by a proverbial living legend, one renowned as a master provocateur, no less?

Ultimately, Costa told WWD at the time, “You just have to accept the challenge. If Calvin Klein passed me the responsibility, I have to take it.”

Costa takes seriously his responsibility as keeper—and mover—of one of fashion’s greatest names. So much so that, in advance of his 10th anniversary as women’s creative director, he challenged his senior staff to an intense examination of their purpose at Calvin Klein, with the goal of distilling their discovery into a clear, concise mission statement that would reflect past accomplishments and encompass forward-looking goals. After a great deal of thoughtful conversation, they had it: “Our mission is to create provocative, sophisticated collections for confident women.”

Asked to break down the statement, Costa started with the first descriptive: provocative. “It’s a provocative brand,” he said. “It’s the soul of Calvin…a fearlessness.”