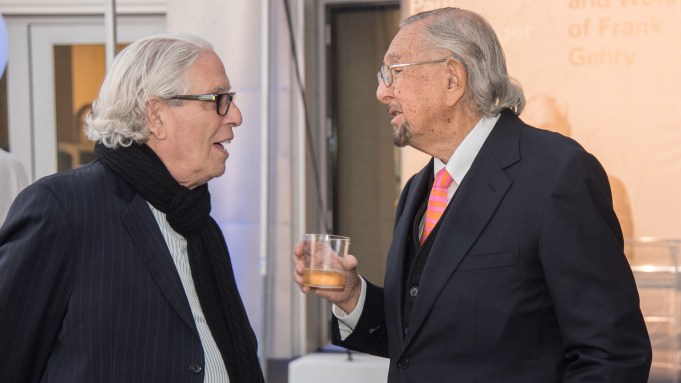 What is Frank Gehry’s contribution to architecture? Well, fellow architect César Pelli says Gehry, the man for whom the term “starchitect” might have been invented, “expanded the limits of architectural form. I think he helped people to understand that daring innovation and different designs could be comfortable and easy to be with.”

Pelli was at a cocktail party on Wednesday to launch “Building Art: The Life and Work of Frank Gehry” by Paul Goldberger (Alfred A. Knopf), which was held at New York by Gehry, the 76-story tower at 8 Spruce Street in Lower Manhattan that is the highest residential building in the Americas. The cover of the book features one of the architect’s early sketches for the Walt Disney Concert Hall. A sketch of 8 Spruce Street is on its spine. In the pool at the building, lines from another Gehry sketch were projected. The architect did not attend the party, and neither did developer Bruce Ratner, one of its hosts.

“I met him when I was a very young writer at the beginning of my career,” Goldberger said of the architect, adding that he did “many, many interviews over a couple of years” with him for the book.

The writer noted that Gehry is “very clear” that he uses technology “as a tool of execution, not as a tool of design.”

Architect Paul Segal said Gehry’s contribution to their métier was “believe it or not, planning. Long before his buildings are built, they’re very well planned.” Segal mentioned that he is an old friend of Goldberger’s and that he “helped design” the writer’s former apartment in the Dakota some years ago.

MaryAnne Gilmartin, president and chief executive officer of Forest City Ratner Cos., gave a brief speech to introduce Goldberger. He thanked his agent, Amanda “Binky” Urban, for encouraging him to write the book, saying that she was probably glad that he wasn’t writing a novel which ”would really have been a disaster.”

Then he continued, “But in some ways this book was as challenging. You aren’t allowed to make any of it up. I thought you just told what happened in the order that it happened…but good biographies actually have an invisible structure.” Goldberger also thanked Gehry for his generosity in signing an agreement that allowed him total access as a biographer but waived the architect’s right to final approval of the book.

“I know that there are things in the book that he disagrees with,” Goldberger said.