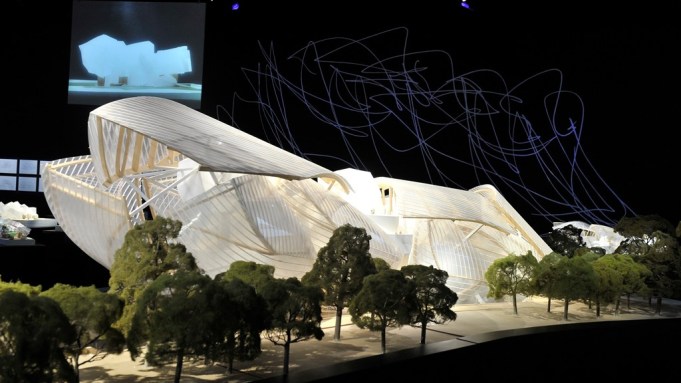 PARIS — “I’m looking at it, and I see everything that I would like to change,” Frank Gehry said at the unveiling of the long-awaited Louis Vuitton Foundation in Paris on Friday, prompting laughter from the crowd packed into the building’s entrance hall. “We designed it seven years ago, so now I have other ideas,” Gehry explained.

The Canadian-born architect needn’t worry. Initial reactions to the building, covered with 12 glass sails and set on a water garden amid the greenery of the Bois de Boulogne, already suggest it ranks alongside the Guggenheim Museum in Bilbao, Spain, as one of the crowning achievements of his career.

Journalists got a preview ahead of its official inauguration on Monday, which will include French President François Hollande and Bernard Arnault, chairman and chief executive officer of LVMH Moët Hennessy Louis Vuitton. The latter also attended Friday’s event.

Members of the public will have a chance to wander through the building’s curving exhibition spaces and terraces, with views of the Eiffel Tower and the Paris skyline, from Oct. 24 to 26, before the foundation officially opens on Oct. 27.

Gehry, who is also the subject of an exhibition at the Centre Pompidou that runs until Jan. 26, said he has had a love affair with France since 1960.

“I lived here for a year. I wanted to stay here when I lived here, but they wouldn’t give me a permit to work. I couldn’t get a license to practice architecture. It would have been a different world for me, right? It’s very special. It’s hard to explain it, but Paris and France has always been an important part of my life,” he told WWD.

Speaking to the crowd later, he described working with Arnault as a collaboration. “It’s not my way to go home and make my thing and bring it and say, ‘This is it.’ I like and value the interaction. It always makes things different, makes the process much more exciting. I’m never sure where it’s going,” Gehry said.

The architect was especially inspired by the Jardin d’Acclimatation, the 154-year-old garden and amusement park where the building is located.

“It brought tears to my eyes when I first visited, because I know how historically important this place is. It’s a sacred place in France. The Jardin d’Acclimatation is filled with potential memories of who played there, who was there — all the fantasies I could have of [French author Marcel] Proust here and so on,” he recalled.

The building, which cost 100 million euros, or $128 million, has variously been compared with a sail ship, an iceberg and a cloud. Jean-Paul Claverie, the adviser to Arnault who was instrumental in guiding the project, said it rapidly became clear from Gehry’s initial sketches that the structure could not be built.

“It took two years of studies and research, requiring a team of more than 100 top-level engineers, to invent the technology capable of executing the artist’s vision,” he said. Digital Project, a 3-D software inspired by a system developed by aircraft manufacturer Dassault, was used to create the complex shapes imagined by Gehry.

“Frank Gehry used the technological and administrative challenges to his advantage. I think it spurred him on creatively and he overcame them,” said Claverie. “He has produced a lyrical, poetic, spectacular and, frankly, totally unprecedented work, because I think there is no building in the world that looks like this.”

The structure covers a surface area of 118,400 square feet, including 4,100 square feet of museum space divided into 11 galleries, a 350-seat auditorium, a bookstore and Le Frank, a restaurant run by Michelin-starred chef Jean-Louis Nomicos.

Its outer shell is made from 3,600 glass panels with a semi-opaque coating that changes appearance according to the weather. Underneath are central structures referred to as “icebergs,” which are covered with 19,000 white plates of fiber-reinforced concrete, each made from a specific template, according to its position.

The space will house temporary exhibitions, a selection of works belonging to the foundation and from Arnault’s personal collection, and multidisciplinary events such as concerts. It also features commissioned works by artists such as Olafur Eliasson and Ellsworth Kelly.

Suzanne Pagé, artistic director of the Louis Vuitton Foundation, has devised an opening program that will roll out in three phases between now and March.

Phase one includes an exhibition showing Gehry’s process through drawings and models he made during the different phases of conception and realization of the building. On the upper floors are works by artists such as Gerhard Richter, Christian Boltanski, Bertrand Lavier and John Giorno.

The soaring spaces — some galleries have funnel-like ceilings culminating in skylights — lend themselves especially well to monumental pieces like Thomas Schütte’s “Man in Mud,” a statue of a water diviner, but Pagé said she also plans to stage more intimate shows.

“We will improvise. It’s a different, singular space, but its very difference is a challenge, so I think we will try to come up with solutions every time,” she said. “The building is an architectural folly — as we say in France — on the outside, so we worked on making it soothing on the inside.”

Gehry said he hopes Pagé and the artists she commissions would play with the space.

“It’s not going to be static. It’s going to be changing, and that’s kind of nice, and artists can take it over. We have a proposal from Daniel Buren that completely takes the building over and makes it a Daniel Buren. That’s great for me, I love that, and I think they’ll do it,” he said.

Frédéric Migayrou, cocurator of the Gehry exhibitions at the Centre Pompidou and the Louis Vuitton Foundation, considers the building a major achievement.

“From this building, you can draw the entire trajectory of Frank Gehry’s career and find elements of the language he has built up over the last 50 years,” he said. “It’s his masterpiece. Beyond the Guggenheim, it’s really the building that reveals the whole complexity of his language, his talent and his genius.”