With Valentino set to take his final bow on the couture runway in January, successor Alessandra Facchinetti faced the daunting task of presenting her first... 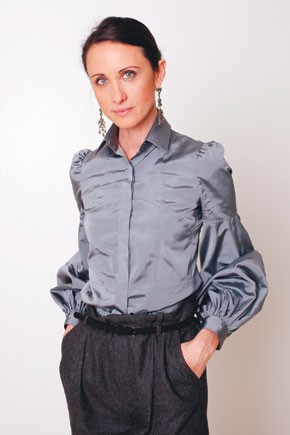 NEW YORK — There was no red in sight, just a hint of cerise.

In town to present her first Valentino effort for pre-fall, Alessandra Facchinetti showed a few new shades for the iconic fashion house, while balancing structure and lightness.

Facchinetti experimented with proportion, teaming a structured body with bell-like ruched sleeves, chiffon pleated to an origami effect and tasseled bow belts. The overall effect had a lightness and ease to it without forsaking the namesake’s sophistication and elegance.

The pre-fall collection was a teaser of the designer’s vision for Valentino. Since being named creative director of the women’s collections in September, Facchinetti has spent her days studying the designer’s extensive archive, turning garments inside-out to learn about their impeccable construction. Facchinetti oversees the couture and ready-to-wear collections, as well as the RED and Roma secondary lines. Valentino himself will be retiring after the haute couture shows in Paris next month.

“What I am doing is trying to establish my aesthetic into a Valentino frame,” said Facchinetti. “This is a house where couture was the main aspect. I want to explore the culture of couture.

“I want to keep the culture of the house in terms of gowns, but lighten it up,” she added.

Facchinetti said she made a conscious effort to create an expansive assortment for pre-fall.

“For me, it was very important to show from the first collection that the direction is complete, that there isn’t just evening, but that we are also approaching day,” she said.

“I am working on coats, shirts and jackets in a basic way and then adding something that was a part of my compromise with the past and the present,” she added. “We are trying to build a collection that maintains the established business of the past and moves toward something new. There is a definite intention to build a balance. This will be a new part of the Valentino history, a new era.”

Unlike many other venerable fashion houses that have chosen to forgo their costly and rarely profitable haute couture divisions, Facchinetti couldn’t conceal her excitement at working with Valentino’s couture atelier in February, after the designer’s final runway bow. “There is a workroom which is the strongest in the world,” she said.

Facchinetti, who moved onto the fashion radar after a short-lived stint as head of women’s wear at Gucci, said she was made to feel very welcome at Valentino, although she hasn’t yet met Valentino himself — “We tried,” she said — but has spoken to his business partner, Giancarlo Giammetti, on the phone. She said that, fashion-wise, she feels like something of a kindred spirit to the legendary designer.

“You can’t imagine how honored I am,” Facchinetti said. “It was the last thing I thought would happen. I can’t compare Valentino with anyone. He is a part of the history of fashion. This is a new start.”

Facchinetti added she will treasure all the Valentino elements and history “like a jewel. I really feel very close to him and his sense of beauty, romance and femininity. But I don’t want to compare myself with him at all. For me, the best gift is if he is happy about what I am doing, but I am a different person. I am a woman.”

That said, Valentino’s own extravagant lifestyle has always been inextricably linked to the appeal of the clothes, a notion Facchinetti is very aware of, but not too perturbed by. “He spent 40 years and I am just starting,” she said. “I want to improve on the complete view of Valentino, and explore the lifestyle of the house.

“Today, I feel much clearer about what I want and who I am,” she added, perhaps with a nod to her stint at Gucci. “The approach is really me and it’s my aesthetic. Valentino was very focused on beauty and timelessness, and this is ultimately my approach.”

Most recently, Facchinetti had designed the Gamme Rouge collection for Moncler, and the partnership officially ended on Monday. There, she helped put the outerwear company on the fashion map, adding details such as sequins, plumes and hand-embroidery to the brand’s signature down jackets.

“Moncler was very important for me,” she said. “It was the first project I could really express myself in, which would seem bizarre because it has such a sports focus, but the approach was the same. I started with a couture approach and translated it into sport, with embroidery and finishes. It probably helped me get to where I am today much more than what I did in the past.”

Facchinetti, who landed in New York on Sunday, plans to return to Italy today.

“I love New York, I love walking here,” she said, adding that in her free time she would like to check out the New Museum on the Bowery and dine at her favorite Manhattan eatery, Bottega del Vino.

“For me, it was very important to come to New York,” Facchinetti said. “I want to be here to explain what I am doing. I always feel it’s important to meet in person, and to explain the way I work, and the way the pieces are constructed so that people understand who I am.”