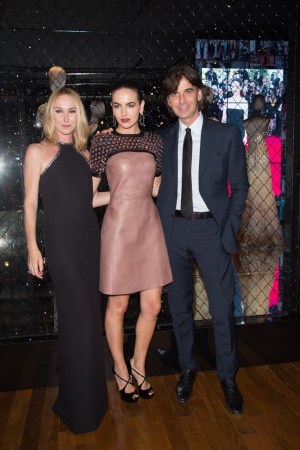 The three-week “Forever Now’’ show replicates Gucci’s Museo in Florence, and pays tribute to the fashion house’s heritage while looking to the future. That is precisely Giannini’s philosophy after 10 years as the brand’s chief designer.

Historic and contemporary pieces are on display at the Brazilian mall, on loan from the Gucci Museo. They are organized in different spaces that are decorated with the house’s signature motifs and collections, including Flora, Bamboo, Travel, Horsebit and the couture Premiere line.

“Brazilians are really hungry for our pieces, for fashion, they want to know what the next collection will be,’’ Giannini said in Rio de Janeiro at the end of her four-day visit to Brazil. “There is a lot of passion here.’’

Gucci has five directly operated stores in Brazil, three in São Paulo — Brazil’s wealthiest city and financial center — one in Rio and one in the capital, Brasília. Gucci expects to open two more stores “in the near future,” according to a spokesman, one of them in Recife, in Brazil’s northeastern region, where new high-end malls are attracting luxury brands from all over the world.

In Rio Friday, Giannini participated in a conversation with fashion students at the Museu de Arte do Rio de Janeiro. Attendees peppered her with questions about how the designer juggles her responsibilities running Gucci’s more than 10 collections a year and her role as cofounder of Chime for Change, an organization that raises funds and awareness for projects focusing on women’s and girls’ empowerment, health and education. Beyoncé Knowles-Carter and Salma Hayek Pinault are the other cofounders of the global organization.

During the event in Rio, Chime for Change revealed it will finance three local institutions that work with education for low-income women and with victims of domestic violence. Gucci will donate $10,000 each to Redes da Maré, Universidade das Quebradas and Instituto de Pesquisa Pretos Novos through the Catapult crowdfunding platform, a strategic partner of Chime for Change.