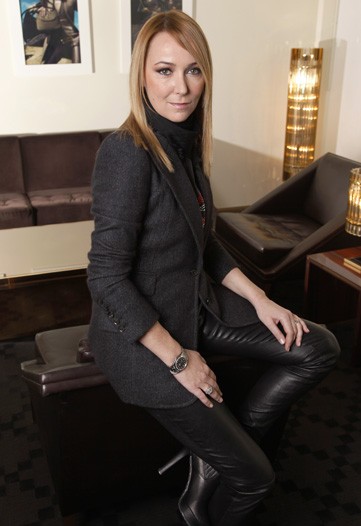 Frida Giannini candidly admits she’s type A, all the way.

Such rigor may not always be associated with the whimsically impromptu fashion world, yet such traits — like being a detail-oriented perfectionist — were a blessing for a designer who in a flicker went from anonymity to stardom.

When Gucci Group announced in February 2006 that the Roman designer was the chosen one to fill Tom Ford’s considerable loafers, the daring move inevitably raised eyebrows.

Could Giannini, who in only four years went from the house’s handbag designer under Ford to sole creative director — succeeding women’s ready-to-wear designer Alessandra Facchinetti and men’s designer John Ray — cope with the pressure?

The answer was yes, she could, and she did. Even as a rtw neophyte, she exuded a cool and calm aura, taking her new responsibilities in stride and proving to be adept and versatile.

The first thing she did when she set out to create her imprimatur for the multibillion-dollar house was to recruit an international design team, which she now describes as “very consolidated and in symbiosis.”

“I trust [my assistants] very much. Designwise, we speak the same language and our relationship gets richer by the day,” mused Giannini.

Such trust has led her to delegate more than in the past. “I don’t obsess as much over every single key chain and I feel much more mature. In fact, I think that my vision for Gucci grows up season by season to befit a very complex brand, an international brand that still has an Italian soul.”

Each season, the design process is meticulously plotted out to avoid last-minute hysteria over last-minute changes to the runway  show lineup, she said. “I could never put everything together in three days like some of my colleagues do. Sure, we may change a few looks or add some colors, but nothing major.”

Six years later, on the eve of the brand’s 90th anniversary celebration, practice has perfected her method and vision, and her collections demonstrate a more grown-up confidence and style.

“I certainly don’t feel I’ve arrived, but I feel stronger and more independent. I’m also more belligerent than in the past when it comes to defending certain positions or ideas,” she said.

And, with a laugh, she noted that she doesn’t get butterflies in her stomach anymore before conducting an interview in English, or when meeting a top editor.

Fashionwise, Giannini’s early penchant for waxing the classic with excessive doses of attention-getting, high-gloss sexiness has morphed into a gentler and less conspicuous aesthetic. But it’s still sexy.

In the mid 2000s, when luxe was all about excess and glitz, Giannini went to town with bling, piling on embellishments and steaming things to the max.

Today, her designs are more discreet, allowing for labor-intensive craftsmanship to do the talking.

“As I was finding my footing, the first collections were a bit of a shot in the dark because as much as I loved Tom, I needed to break away from [his fashion] so as not to look ridiculous. I needed to invent a new language, which is something you build day by day, not overnight,” she stressed.

“After experimenting with fashion’s many facets and drawing inspiration from David Bowie to Russia, I feel that over the past couple of years I have synthesized, edited and cleaned up my act.”

Indeed, the current fall and the upcoming spring collections were palate cleansers, with less flash and more controlled elegance, sprinkled rather than drenched with seduction and details.

But what is sexy for Giannini?

“A state of mind.…More than an outfit, sexiness is something that you have within, that you exude by the way you talk, move your hand — but sexiness without a strong personality isn’t possible.

“I’m very happy when I see someone who is sexy and self-confident in a room with thousands of people, possibly wearing or carrying a Gucci item,”she said.

In retrospect, she also admits that some of the tougher reviews and criticism, particularly with her earlier efforts, turned out to be food for thought. “Today, I understand and better appreciate the criticism for certain shows or for my lack of consistency. I wanted to experiment and it didn’t always work,” she said.

She cited the David Bowie, Seventies-driven lineup for fall 2006 as her least favorite collection, while the upcoming spring season is her most favored.

Being on the sets of the ad campaigns also proved an effective way to portray the season’s big-picture mood.

“In the beginning, I wouldn’t go. But working with top directors like David Lynch, actors like James Franco and top photographers and models has been very useful,” Giannini explained. “The ad campaign is when you put all the categories together to create a story, a vision for the season. It’s like putting a hat on the creative side of the various categories.”

Vintage fashion, film, music (though she claims she’s still waiting for a new generation of trendsetters like Mick Jagger or Bowie) and heritage continue to spark her creativity.

Giannini, in fact, has never shied from sharing how inspirational the label’s own past has been to her.

“If I were to ignore Gucci’s great past and archives, I would be presumptuous and hypocritical. There is still so much to learn.

“The designer of the Gucci house has to share with its audience the huge respect toward the brand’s history and past. I was so fascinated the first time I visited the archives, which are full of incredible objects, and it’s great fun to bring them back to new life.”

Her last two collections were infused with the iconic elegance and sensuality that characterized Gucci in the Sixties and Seventies, when the brand made its international leap and became a favorite of the rich and famous like Grace Kelly, Audrey Hepburn, Sophia Loren and Anita Ekberg, and, of course, Jackie Kennedy, for whom a Gucci handbag is named.

Giannini revisited the Diamante pattern for the fall season, a graphic diamond-shaped motif that hearkens back to the Thirties and that preceded the double-G logo. As for the latter, Giannini devised a new version of the 1973 classic design for fall: two gold, curvilinear interlocking Gs.

“I think the work that I am doing to try to create a strong balance between what is our rich heritage and what is the future and innovation is very important,” she said. “At the same time, it’s intriguing to work with new technologies, suppliers and new media. We’re living in an exciting moment, not only for fashion and creativity but also in terms  of communication.”

She also brushes aside any disdain for commercial clout held by many fashion purists.

“What’s wrong with commercial when we’re not talking mass market but about a collection that sells out?”

The notion of catwalk-only pieces isn’t one she cares for, stressing that even the wildest design that struts down her runway goes into production, albeit in small quantities and for key flagships.

As much as she’s a clever multitasker, accessories have remained Giannini’s favorite category.

For her first solo effort in 2004, she designed the Flora bag, culling a Sixties floral print designed for Grace Kelly from the Gucci archives. Other achievements are the La Pelle Guccissima line, etched with the double-G logo, and matte crocodile bags.

When she introduced the New Jackie for spring 2009, a rendition of the house’s renowned statement bag, it was a first step toward the new heritage course in prerecession times.

“The fact that times were changing was already starting to register, but when the financial crisis burst, working on a more timeless wardrobe became mandatory,” said Giannini.

In a move to extend to another audience layer, last year the company launched children’s wear.

“Of the various new categories, it’s the most fun,” she said. “I love designing for these adorable gnomes and ironically, we also managed to pluck a few looks, such as cute little trench, a fur vest and a baby tuxedo, that we reworked for adults.”

Gucci also recently launched an international ad campaign called Forever Now aimed at capturing the brand’s heritage and the future as it gets set to mark its 90th anniversary.

The first one, for fall, is comprised of two black-and-white images from the Fifties taken inside the house’s Florentine factory on Via delle Caldaie. Plucked from the archive, the photos portray apron-clad workers painstakingly lopping hides, with swatches of leathers hanging from the wall or under a vaulted ceiling.

This house certainly has a remarkable and enviable past, one that especially in more recent times has been safeguarded, exalted and catapulted into the future.

So how does Giannini see the next decade?

“It’s tough to say, but I think Gucci will be stronger especially because we’re tackling emerging new markets in Asia, South America and India, while China is a reality,” she said, but most importantly, what will continue to fuel its growth is that “I’m in love with this brand, and that’s something that’s never going to stop.”