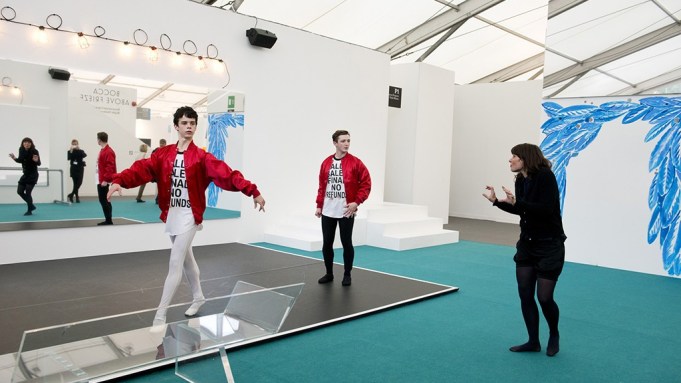 LONDON — A new look and a series of flush collectors gave a big boost to the 12th edition of the Frieze art fair, which appeared to be untarnished by a widening European economic slowdown.

The four-day fair, which closed Saturday, got a facelift this year from Universal Design Studio, an architecture and design firm whose client list includes Ace Hotel, LVMH Moët Hennessy Louis Vuitton, the Victoria & Albert Museum and the National Gallery.

Some 162 galleries from 25 countries took part in the fair, which also showcased Frieze Masters, the Sculpture Park, Frieze Projects, Focus and Live, a conceptual performance platform. The latest edition of the fair was sponsored by companies including Deutsche Bank, Gucci, Alexander McQueen and Selfridges. Gap also created a White Space exhibit and lounge that displayed 30 T-shirts and sweatshirts created with designs from previous issues of Visionaire.

“The fair feels much more airy and is more of a pleasure to walk through. Also the quality of work on view has improved, which was about time,” said Rachael Barrett, founder of Three Sixty Degrees, an art consulting firm.

The designers brought lighting levels down so that people could feel more comfortable in a predominantly white environment, carpeted the floors and created “a clean geometry” overall, in the words of Joanna Stella Sawicka, deputy director of Frieze.

“There have been more international visitors than I expected to see, and a large part of that is because the quality of the exhibitions at galleries outside the fair is pretty high. Overall in the market, collectors are much more open and interested now in artists from all over the world and with varied cultural backgrounds, especially when these artists focus on universally relevant issues from an interesting or different perspective.”

Barrett said that from her perspective the art market has not been affected by the shaky fiscal climate. “I think a lot of new collectors may have now become a little more careful in terms of what they consider purchasing, and at what level they enter the market, but overall sales are strong and most gallery salespersons I know still meet new collectors at the fair.”

According to figures released by Frieze on Monday, the Anton Kern gallery sold a Mark Grotjahn sculpture for $500,000, while at the 303 Gallery, a work by Alicja Kwade was sold for an estimated price of 30,000 euros, or $38,338 at current exchange. At Gavin Brown’s Enterprise, six portraits by Ella Kruglyanskaya were sold for about $50,000 each.

Sotheby’s in London reported its strongest ever Frieze week for auctions: It sold Piero Manzoni’s Achrome for $20.2 million — the highest price for any work sold at auction during the week — and noted that Chinese participation was up 125 percent at the evening sale of contemporary art.

“This week, the stage belonged to Italian art. We’ve seen demand grow over the last decade, but this week saw a sea change in the market. With major new benchmarks set, the market is now in a whole new place,” said Alex Branczik, head of contemporary art, Sotheby’s London.

Kurt Mueller, director of David Kordansky, an L.A.-based gallery that showed works by artists including Anthony Pearson, Evan Holloway and Ricky Swallow, described the fair as steady and confident. “I would say people know what they’re looking for, and there haven’t been any surprises so far. People know what they want and they come for it.”

Sawicka said one of the reasons the market has remained vibrant is because people collect for different reasons.

“I think we have a lot of established collectors at this fair with significant collections, doing it over a long period of time. There are always people who are new to the market who are always invested in a quicker return — the speculators — and that happens in every environment. I think the hype of every year has receded somewhat, but still there are very significant prices being paid for very young artists. That is still a symptom of the market that we are in.”

Maureen Paley, whose gallery showcased works by artists including Wolfgang Tillmans, AA Bronson and General Idea, said she’s witnessed “continued commitment” to those three artists and to buying contemporary art alongside older works. “I’m seeing this mixture, people are not only looking at the young work, there seems to be a distinct mixture, those who have been enduring, with those who are emerging.”