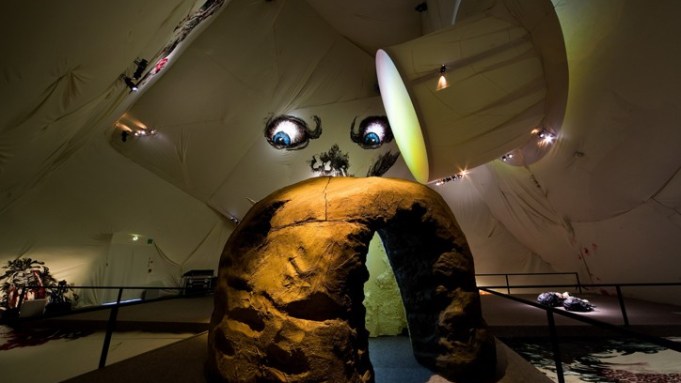 SEOUL — The Prada Transformer has been transformed for a third time — it’s now a contemporary art gallery.

The PVC-covered tetrahedron designed by Rem Koolhaas, which sits on the grounds of the 16th-century Gyeonghui Palace here, is a venue for “Turn Into Me,” a selection of works by Swedish artist Nathalie Djurberg. Curated by the Fondazione Prada, the exhibition runs from Saturday to Sept. 13. The transformer previously contained a cinematic event, and before that, displayed the “Waist Down-Skirts by Miuccia Prada” exhibition, which opened the current series of interdisciplinary projects in April.

Djurberg, the recipient of the Silver Lion for a Promising Young Artist at this year’s Venice Biennale, creates short animated films shot with the stop-motion technique. Most of the works on display here were shown in 2008 at the Fondazione Prada in Milan. However, for the unique space in which the works are being shown this time, Djurberg added a new work: The artist painted graffiti using oil crayon and paint on the inside of the Prada Transformer, which is covered in white felt.

Walking into the cocoonlike structure filled with soft, pulsating music composed by Hans Berg feels like entering a primeval womb, a feeling reinforced by the graffiti, which evoke primitive cave paintings. Within are more cavelike structures that house Djurberg’s animations — which are so disturbing that organizers advise against anyone under age 18 attending the show.

The grotesque image of bones and torn flesh dominate the animations: a dead body out of which swarms of maggots emerge, devouring the flesh, leaving behind a bare skeleton. However, because the scene is rendered in clay animation, a form usually associated with play, its grossness is diminished.

Speaking at a press conference held at the Seoul Museum of History Thursday, the slightly nervous and shy Djurberg said, “What comes out of tears, sweat and nervousness is everything. If you feel secure, then you are not challenged.”

One fear she felt while preparing for the exhibit was the structure’s large size. “The space didn’t really feel like mine,” she said, noting a tension between art and architecture. Indeed, Germano Celant, director of Fondazione Prada, summed up the exhibition as a “ping-pong game between architecture, art and music.”

And what’s next for the Transformer when it’s rotated for a final time? That has still to be decided. “We don’t know yet, but it is not going to be a fashion show for sure,” said Tomaso Galli, Prada Transformer project director.