From Jason Wu to Doo-Ri Chung, Designers Gear Up for 2010

Jason Wu and Alexa Adams and Flora Gill of Ohne Titel see the next year as a challenge.

By Marc Karimzadeh and Julee Kaplan on December 3, 2009
View Slideshow 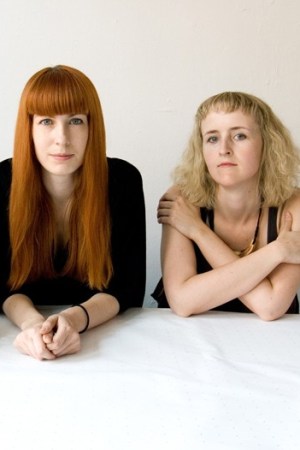 For the past few seasons, New York has become a hotbed for young talent.

But when the economy headed south last year, so did much of the mood in the showrooms of emerging designers struggling to make a name at a time when most stores are reducing their vendor matrix and keeping inventories low.

Designers generally agreed the challenges of 2009 will continue through 2010. With no definitive recovery in sight, they are working on maintaining their businesses — with the added advantage of a year’s worth of experience in difficult times.

“The challenges in 2009 will still exist for the beginning of 2010,” Doo-Ri Chung said. “So many of the stores had to reduce their budgets. I think 2009 was extremely difficult because it made us really take a look at stores that we have, and how we can grow that.”

Working closely with retailers will be key, according to Chung, as will a stronger focus on merchandising.

“Before you would sell goods, they would get to the store and you didn’t think much about it,” Chung said. “Now it’s a completely different circumstance, where your responsibility is not just to [wholesale] clothes, but to see how they perform and be a partner with the vendors.”

Jason Wu, whose career saw a major boost this year thanks to First Lady Michelle Obama wearing his designs, said the key challenge next year will be maintenance.

“I think the big challenge is maintaining the growth that I have had in the last three years,” Wu said. “We have been growing steadily from 2008 to 2009, and are set to accomplish that for 2010 by growing in a very strategic way. It’s about maintaining that growth without going too fast and too slow.”

Wu added the times call for conservation in some areas to funnel funds into others that will serve the company in the long term. The designer, for instance, added a pre-fall delivery, and is creating a capsule collection for cashmere company Tse. In January, he will also relocate to a new showroom on West 35th Street, which will increase his space from 2,000 to 9,500 square feet. As for Wu’s hopes next year, he said, “I am trying to work in five days of vacation next year. I didn’t do it this year.”

Alice + Olivia founder and designer Stacey Bendet said one of her biggest challenges in the new year will be finding enough hours in the day to accomplish everything she has planned for the growth of her brand. While her sales were flat this year over last, she has big plans in 2010. She said she is heavily focused on marketing ideas for the new e-commerce area of her Web site.

“There are so many new and exciting ways to market things and create online buzz. It’s really a whole new world, and I look at it as a real challenge in a good way,” she said.

In addition, Bendet said she plans to move into her new offices in the Highline building in Manhattan’s Meatpacking District in the first half of the year. She said the company has outgrown its space at 80 West 40th Street.

“I am excited for the creative design process of the space and finally having a headquarters and home,” she said. “On the business front, I am also looking forward to expanding our retail stores into different locations.”

Rag & Bone owners Marcus Wainwright and David Neville said because they are still relatively small, they have considerable room to grow in 2010. The company plans to launch e-commerce next year, but that will be just one piece of the puzzle.

“Next year we hope that growth comes in the form of increased distribution and possibly new categories of merchandise,” Wainwright said. “People want value, and that’s what Rag & Bone strives to offer in everything we make.”

Neville added: “It’s important to maintain the highest levels of integrity and quality in order to grow.”

Many designers are looking for growth opportunities in alternative markets and even some nonapparel areas.

“We are always looking for a new business paradigm and ways we can expand the business and new ways of doing business,” Natalie Chanin, designer of Alabama Chanin, said. “We are branching our business out in a new way.”

To that end, Chanin plans to release her second book in March, called “Alabama Studio Style,” with a focus on her style and home. It will include two best-selling dress patterns so “people who can’t afford to purchase our look can make it themselves,” she said. The designer will also return to men’s wear with a small collection of T-shirts to be unveiled in February, and will collaborate with Heath Ceramics on a tabletop collection that will launch to the trade in May.

Michael Wallace, president of Adam, said it, too, has begun thinking of ways to expand the business in 2010. While 2009 saw a 50 percent boost in wholesale volume for the brand, Wallace said in this climate, which isn’t changing so quickly, companies need to work harder than ever to maintain a decent business.

“We do have a plan to grow the business next year through various store partnerships, a plan for licensed stores and some design collaboration possibilities for Adam,” he said, without divulging details. “In order to survive, we have to be willing to step outside the box and really hustle.”

Jane Siskin, president and chief executive officer of L’Koral Industries, which produces a range of contemporary lines including Elizabeth & James, Patterson J. Kincaid, LaRok and the new Olsenboye line at J.C. Penney stores, said her biggest challenge going into the new year is still all about credit.

“There are a lot of department and specialty stores out there that still don’t have credit, and it’s a big problem,” Siskin said. “Overall, planning the business is much more challenging.”

With that said, Siskin said 2010 will see significant growth for many brands within the L’Koral umbrella. Elizabeth & James plans an increase in the overall size of its collections, especially on the core items, and Patterson J. Kincaid, which launched at retail in April, will triple in size. Olsenboye, which just launched at 50 Penney’s doors, will expand to about 600 doors. Without tipping her hand, she added, “We have a lot of new tween things planned.”

Siskin said while her business will continue to grow in 2010, she does have some major concerns about the industry as a whole.

“I really don’t think that business will ever be the same as people continue to be more careful about how they spend,” she said. “We have to work so much harder to maintain the business.”

Wayne Lee, designer of Wayne, said maintaining consumer interest will be a key challenge in the new year.

“There have been a lot of changes lately with the consumers and the way they see fashion, and so many designers now have more diffusion lines,” Lee said. “There is a little bit of a price restraint, and we have restraints to keep pushing forward with all these amazing designs and newness, so the challenge is to figure out how to bring an affordable price to my consumers.

“It is moving in a more positive direction, but we still have to work through this time period,” she added. “It’s not all negative. It actually pushes us as designers to work harder and to really think about our designs and where we want to do our business.”

“We have plans next season to go to the Tranoi trade show in Paris and try to reach out to European markets, which we haven’t tried before,” Yoon said. “We are also planning for a larger collection for fall and are also looking to extend to holiday and resort collections for the first time. In order to have a steady cash flow, we do need to ship more often.”

Clyburn added, “Retailers are still struggling, so there is still a big question about what our sales growth will be. We were optimistic this season and saw a slightly small percentage increase, but there is definitely still apprehension in terms of a lot of retailers being cautious with their buying. That’s a reality.”

Designers Alexa Adams and Flora Gill of Ohne Titel said pricing will continue to be a key element for success in 2010.

“We definitely have been thinking a lot more about value,” Gill said. “For the last spring season, we tried to do two groups that were more reasonably priced with dresses that retailed for about $700 and those did really well for us, so we are thinking of expanding into that price range a little bit more, while still trying to do really interesting pieces.”

Adams said the prospects of a full recovery are uncertain for 2010. “We are seeing a lot of really good signs. We have gotten reorders, and I think there’s a lot more excitement. If you do a really strong collection, and you do something that appeals to the press and at the same time is very salable, I think people will pick it up.”